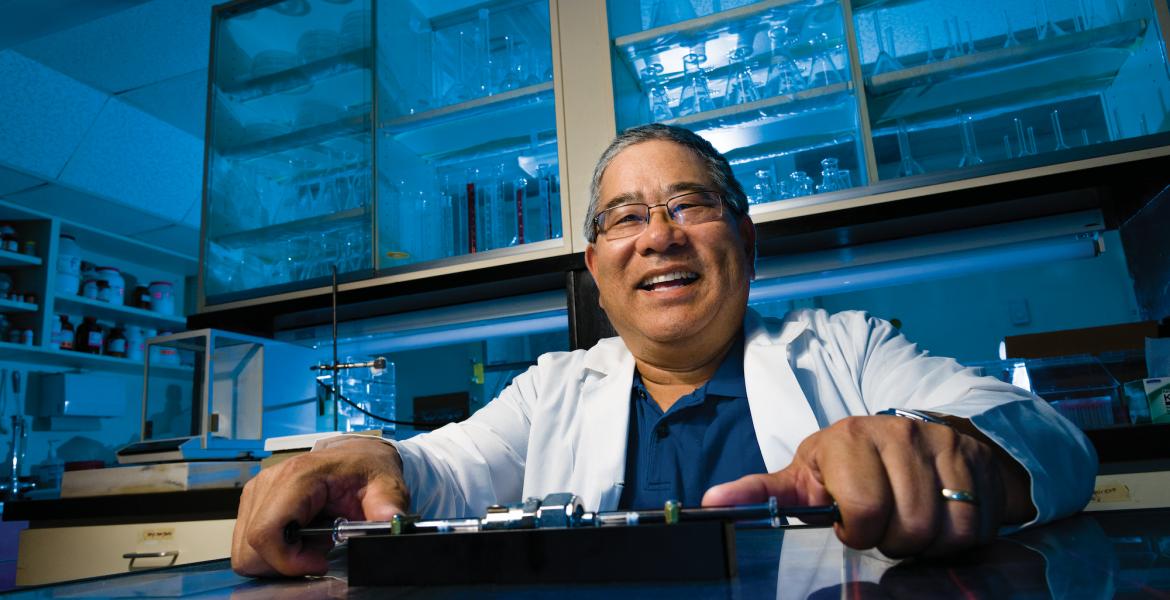 This year's University of Arizona inductees into the National Academy of Inventors include Terry Matsunaga, a research professor of medical imaging at the College of Medicine – Tucson and adjunct professor of biomedical engineering.

By
Paul Tumarkin
Time to read
3 minutes
Print
a- a+
Read so far
Liesl Folks, Mark Van Dyke and Terry Matsunaga have been recognized for their technological contributions to engineering and health care.

Three University of Arizona inventors have been elected as fellows of the National Academy of Inventors. The NAI Fellows Program highlights academic inventors who have demonstrated a spirit of innovation in creating or facilitating inventions that have a tangible impact on quality of life, economic development and the welfare of society. The NAI fellow designation is the highest professional distinction for academic inventors.

"Invention, technology transfer and commercialization are a cornerstone of the university's research enterprise, not in small part because this is one of the most direct ways in which we're able to have an impact on the lives of real people," said Elizabeth "Betsy" Cantwell, UArizona senior vice president for research and innovation. "I am thrilled that Drs. Matsunaga, Van Dyke, and Folks have received richly deserved recognition and fellowships from the NAI for their contributions to science and society."

"Recent years have shown us – maybe more than any other time in recent memory – the immeasurable impact inventors can have on making a better world for all," said Doug Hockstad, assistant vice president for Tech Launch Arizona, the UArizona office that commercializes inventions stemming from university research. "My wish is that the spirit and drive of these three extraordinary faculty serve as a model for the many, many more innovators in our community whose work has the potential to address the challenges we face."

Prior to her academic leadership positions, Folks had a successful career in industry innovation and research leadership. After working for 16 years in research and development for companies including IBM and Hitachi Global Storage Technologies, she became an internationally recognized expert in magnetic materials and devices, nanoscale metrology and spin-electronic devices.

Folks holds 14 U.S. patents and has authored more than 60 peer-reviewed papers. Her patents involve technologies such as from 3D memory arrays, electromagnetic resonance sensors and patterned magnetic recording media. Her work contributed to the optimization of miniaturized magnets that are used in motors, cellphones, headphones, field sensors and more. Folks is a university champion for innovation, invention and entrepreneurship, and has created and supported academic programs to encourage students of all levels to problem solve with impact as the goal.

"I am deeply honored to be recognized as a fellow of the NAI and hope to continue to support others to pursue innovation and entrepreneurship at all stages of their careers," Folks said. "We urgently need creative and effective approaches to improving the well-being of people across the world and securing a healthy environment – tasks that urgently require cross-disciplinary innovations."

With a career that has spanned industry and academia, Van Dyke is committed to discovery and innovation, and seeing inventive ideas make an impact. His research has led to significant contributions to tissue engineering and trauma treatment, introducing the use of keratin-based biomaterials as treatments for burns, hemorrhage, bone healing and peripheral nerve repair. He has 40 U.S. patents and has been an author on more than 160 scientific publications as well as multiple books and chapters. He has been honored with multiple awards and fellowships and has co-founded three startups that have more than $70 million in annual revenue and over 50 employees combined. Of his 40 patents, 30 have been either assigned or licensed, and his innovations have resulted in five impactful products including novel wound dressings and gels and creams for wound care.

"I am especially honored to receive this distinction because NAI acknowledges not only the quantity of an inventor's work but, importantly, the translation and impact," Van Dyke said. "I look forward to serving in the role of NIA fellow and to helping support the U.S. innovation enterprise."

Matsunaga's research focuses on using microbubble technology for cancer imaging and drug and gene delivery. He developed Definity microbubbles, a technology that uses perfluorocarbons that can be injected during an echocardiogram to help diagnose problems in the heart. He played a key role in advancing what became known as perflutren microspheres to Phase I clinical trials, which culminated in the first human studies of a new intravascular ultrasound contrast agent called MRX-115.

Matsunaga is listed on 17 patent applications and is an inventor on 23 issued patents. His inventions have been licensed to two startups: Nanosonic Bioreagents and Triangle Biotechnology.

"It is indeed an honor for myself, my family, my department for supporting me throughout, and all those students and colleagues who were there to turn those ideas into realities," Matsunaga said. "I am also very thankful to all at the University of Arizona for giving me the opportunity to spawn research creativity that has led to this award. Frankly, it is they who deserve all the credit."

The 2021 NAI fellows come from 116 research universities and governmental and nonprofit research institutes worldwide. They collectively hold more than 4,800 U.S. patents, and their research and entrepreneurship span a broad range of scientific disciplines. The new class includes 33 members of the National Academies of Sciences, Engineering, and Medicine and three Nobel laureates.

"The inclusion of our faculty members in this prestigious group of innovators speaks volumes about the tremendous work being done at the University of Arizona to create positive impact in people's lives," said University of Arizona President Robert C. Robbins. "Dr. Folks, Dr. Matsunaga and Dr. Van Dyke are all deeply committed to exploration, which is one of the core values of our university, and I am proud to see their efforts recognized in this way."

The new fellows will be inducted at the 11th Annual Meeting of the National Academy of Inventors in June in Phoenix.