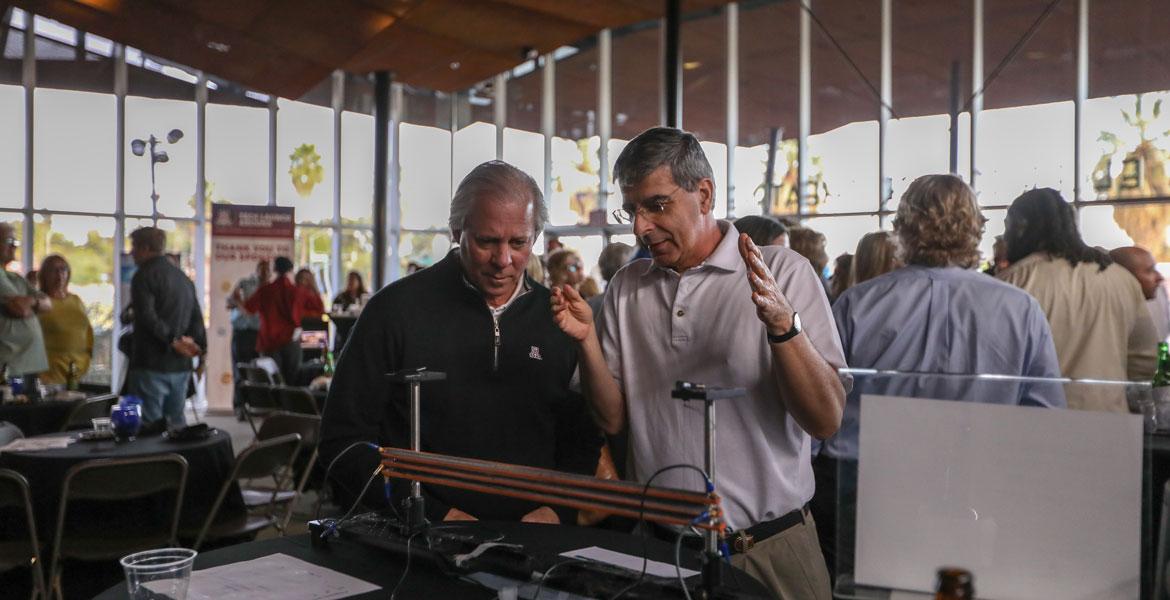 Home / Stories / Sound of the Future: A New Analog to Quantum Computing

Sound of the Future: A New Analog to Quantum Computing

By
Emily Dieckman
Time to read
4 minutes
Print
a- a+
Read so far
University of Arizona engineers are using soundwaves to search through big data with more stability and ease.

Human beings create a lot of data in the digital age – whether it’s through everyday items like social media posts, emails and Google searches, or more complex information about health, finances and scientific findings.

The International Data Corp. reported that the global datasphere contained 33 zettabytes, or 33 trillion gigabytes, in 2018. By 2025, they expect that number to grow to 175 zettabytes. One hundred seventy-five zettabytes of information stored on DVDs would fill enough DVDs to circle Earth 222 times.

While quantum computing has been touted as a way to intelligently sort through big data, quantum environments are difficult to create and maintain. Entangled quantum bit states, or qubits, usually last less than a second before collapsing. Qubits are also highly sensitive to their surrounding environments and must be stored at cryogenic temperatures.

In a paper published in Nature Research’s journal Communications Physics, researchers in the University of Arizona Department of Materials Science and Engineering have demonstrated the possibility for acoustic waves in a classical environment to do the work of quantum information processing without the time limitations and fragility.

“We could run our system for years,” said Keith Runge, director of research in the Department of Materials Science and Engineering and one of the paper’s authors. “It’s so robust that we could take it outside to a tradeshow without it being perturbed at all – earlier this year, we did.”

Materials science and engineering research assistant professor Arif Hasan led the research. Other co-authors include MSE research assistant professor Lazaro Calderin; undergraduate student Trevor Lata; Pierre Lucas, professor of MSE and optical sciences; and Pierre Deymier, MSE department head, member of the applied mathematics Graduate Interdisciplinary Program, and member of the BIO5 Institute. The team is working with Tech Launch Arizona, the office of the UA that commercializes inventions stemming from research, to patent their device and is investigating commercial pathways to bring the innovation to the public.

In classical computing, information is stored as either 0s or 1s, the same way a coin must land on either heads or tails. In quantum computing, qubits can be stored in both states at the same time – a so-called superposition of states. Think of a coin balanced on its side, spinning so quickly that both heads and tails seem to appear at once.

When qubits are entangled, anything that happens to one qubit affects the other through a principle called nonseparability. In other words, knock down one spinning coin on a table and another spinning coin on the same table falls down, too. A principle called nonlocality keeps the particles linked even if they’re far apart – knock down one spinning coin, and its entangled counterpart on the other side of the universe falls down, too. The entangled qubits create a Bell state, in which all parts of a collective are affected by one another.

If you manipulate just one qubit, you are manipulating the entire collection of qubits"

“This is key, because if you manipulate just one qubit, you are manipulating the entire collection of qubits,” Deymier said. “In a regular computer, you have many bits of info stored as 0s or 1s, and you have to address each one of them.”

From Light to Sound

But, like a coin spinning on its edge, quantum mechanics are fragile. The act of measuring a quantum state can cause the link to collapse, or decohere – just like how taking a picture of a spinning coin will mean capturing just one side of the coin. That’s why qubit states can only be maintained for short periods.

But there’s a way around the use of quantum mechanics for data processing: Optical scientists and electrical and computer engineering researchers have demonstrated the ability to create systems of photons, or units of light, that exhibit nonseparability without nonlocality. Though nonlocality is important for specific applications like cryptography, it’s the nonseparability that matters for applications like quantum computing. And particles that are nonseparable in classical Bell states, rather than entangled in a quantum Bell state, are much more stable.

The materials science and engineering team has taken this a step further by demonstrating for the first time that that classical nonseparability can be applied to acoustic waves, not just light waves. They use phi-bits, units made up of quasi-particles called phonons that transmit sound and heat waves.

“Light lasers and single photons are part of the field photonics, but soundwaves fall under the umbrella of phononics, or the study of phonons,” Deymier said. “In addition to being stable, classically entangled acoustic waves are easy to interact with and manipulate.”

The materials to demonstrate such a complex concept were simple, including three aluminum rods, enough epoxy to connect them and some rubber bands for elasticity.

Researchers sent a wave of sound vibrations down the rods, and then monitored two degrees of freedom of the waves: what direction the waves moved down the rods (forward or backward) and how the rods moved in relation to one another (whether they were waving in the same direction and at similar amplitudes). To excite the system into a nonseparable state, they identified a frequency at which these two degrees of freedom were linked and sent the waves at that frequency. The result? A Bell state.

“So, we have an acoustic system that gives us the possibility creating these Bell states,” Deymier said. “It’s the complete analog to quantum mechanics.”

Demonstrating that this is possible has opened the door to applying classical nonseparability to the emerging field of phononics. Next, the researchers will work to increase the number of degrees of freedom that can be classically entangled – the more, the better. They also want to develop algorithms that can use these nonseparable states to manipulate information.

Once the system is refined, they plan to resize it from the tabletop down to the microscale, ready to deploy on computer chips in data centers around the world.

This work was supported by the W.M. Keck Foundation and the National Science Foundation Emerging Frontiers in Research and Innovation Program.