In fact, Son’s graduate students are known for winning top awards from their professional community and establishing careers with highly respected companies and institutions. In three of the last four years, Son’s students took home the Graduate Research Award from the Industrial Engineering Expo, and his former PhD students are employed at the Indian Institute of Technology Bombay, the University of Miami, Samsung, FedEx, and John Deere. 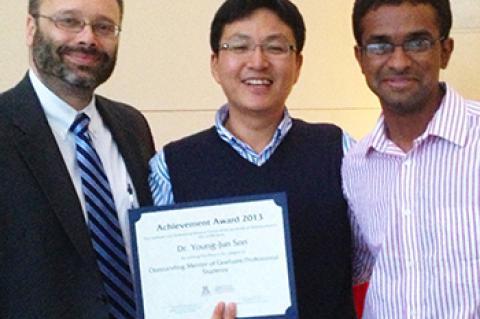 Young-Jun Son -- who takes his role as mentor seriously, and it shows -- with PhD student Sai Srinivas Nageshwaraniyer, Son's nominator, and Cody Nicholls, assistant dean of students, receives his award at the Achievement Awards Ceremony.

Besides being an outstanding role model, one of the things that draws students to Son is his wide range of research projects. Son’s research – funded by the National Science Foundation, Air Force Office of Scientific Research, National Institute of Standards and Technology, U.S. Department of Transportation, U.S. Department of Agriculture, Boeing, and Science Foundation of Arizona – focuses on the development of advanced computer simulation technologies for large-scale systems, such as manufacturing enterprises, transportation, distributed energy networks, mining logistics, social networks, and unmanned vehicle coordination.

“These research accomplishments would not have been possible without significant contributions and all the hard work of my former and current graduate students,” said Son, who now has nine students in his research group and has supervised six doctoral students and 24 master’s students to completion since joining the UA in 2000.

“All of my group members understand how to work as a team and are willing to help each other, creating a truly healthy academic environment.”

Son holds master's and PhD degrees from Pennsylvania State University and a bachelor's degree from Pohang University of Science and Technology, or POSTECH, in Korea. He has earned a number of awards for his contributions in systems and industrial engineering and as an educator.