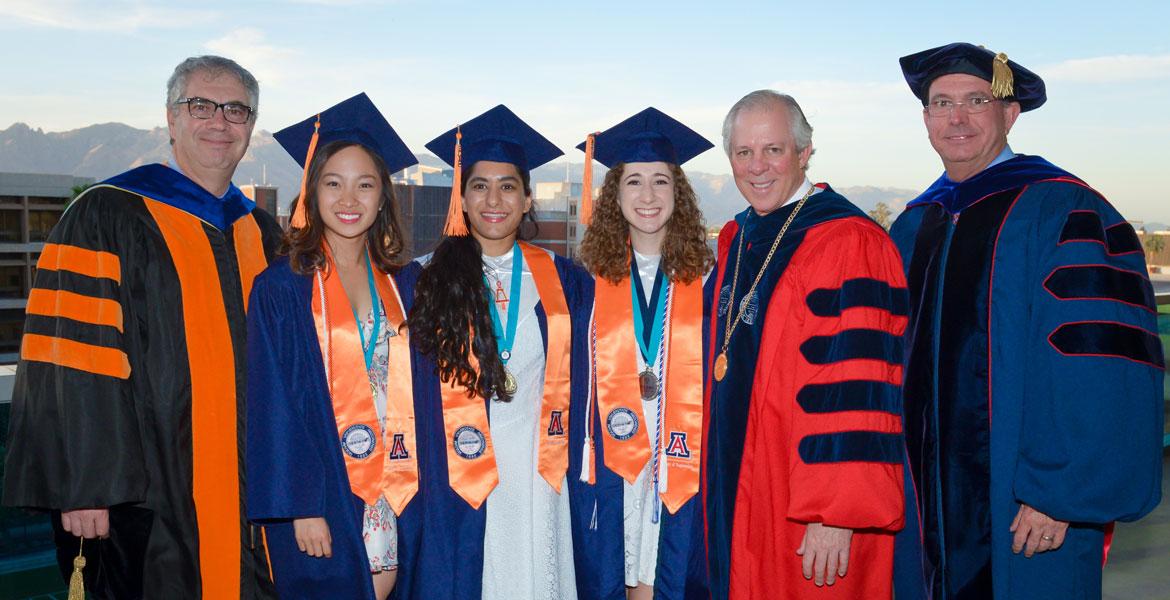 By
Emily Dieckman
Time to read
4 minutes
Print
a- a+
Read so far
These seniors have gone beyond academic excellence -- they’re dedicated volunteers, aspiring diplomats and exceptional researchers.

Each year, four categories of senior awards are given to some of the University of Arizona’s most outstanding graduating seniors. This year, three young women from the College of Engineering are among the recipients of these prestigious honors.

Meagan Tran, a biomedical eng­ineering student, is a 2018 recipient of the Robert Logan Nugent Award, given to students who are actively and enthusiastically engaged in community and University service.

Tran is an honors student at UA who speaks three languages and maintains a 4.0 GPA.

During her four years of college, she has not only been involved with the Engineering Student Council, Tau Beta Pi, the Undergraduate Biology Research Program and the American Society for Engineering Education, but she spent much of her time giving back to the community. She volunteered as a crisis counselor for Crisis Text Line, which connects individuals dealing with mental health crises, for two years.

Now, she volunteers with Tu Nidito, a local nonprofit that offers support to children dealing with grief and bereavement. Every week, she­­­­­ sits down with 3- to 7-year-old children and their families who are dealing with the loss of loved ones.

“I get a lot of fulfillment out of working with people,” Tran said. “I want to make a career out of that service-oriented activity.”

For Tran, this means pursuing a medical path. As a research assistant in two campus labs, she assisted in the local medical community’s shift to computerized data entry and is helping develop microfluidic devices including a “lung on a chip” and a “prostate on a chip.” She founded the UA’s Medical Device Club for students like herself who are interested in device fabrication. During her time as its president, she created partnerships with faculty and researchers, and today the club is working on several projects, including building a prosthetic hind leg for a faculty member’s disabled dog.

The best thing about UA for me is the people I met here. Without those people, I wouldn’t have the opportunities I did.”

Tran was accepted to multiple medical schools but accepted a two-year deferral from the Mayo Clinic School of Medicine in Scottsdale, Arizona, during which she will be teaching secondary biology at an underserved high school in San Jose, CA through Teach for America.

Kaplan is part of the Flinn Scholars program, which funds the cost of in-state tuition and at least two study-abroad experiences for only 20 outstanding Arizona high school students each year. She serves as treasurer of the Arizona Model United Nations and president of the UA branch of Tau Beta Pi, the National Engineering Honor Society. She has also been involved with the Society of Women Engineers and the Honors College Ambassadors program. When the UA held a Science Diplomacy Conference during Kaplan’s junior year, she found her passion for science diplomacy.

“’Oh my gosh, people do this?’” she remembered thinking. ““I thought it was a miracle in a sense, because this was happening at the UA. Not in DC, not in in New York -- in Tucson. This is something I never would have predicted having the opportunity to be involved in.”

Kaplan went on to act as a conference rapporteur at the UA conference. She was also the only undergraduate selected to attend the 2017 American Association for the Advancement of Science’s Science Diplomacy and Leadership Conference in Washington, D.C.

Kaplan has completed a supply chain operations internship at PepsiCo’s Gatorade facility in Tolleson, Arizona, and worked as a research assistant in two campus labs. During her senior year, she teamed up with a student from the UA’s Eller College of Management to win second place in the national Lockheed Martin Ethics in Engineering Case Competition. After graduation, she plans to work for an organization such as AAAS or a science policy committee in Washington, D.C., for one year, then pursuing a PhD in either chemical or environmental engineering.

Namrah Habib, a double major in chemical and aerospace engineering, is a recipient of the Robie Gold Medal Award, given to students who exhibit qualities such as integrity, humility and active participation in student affairs.

Earlier in her senior year, Habib was awarded a 2018 Churchill Scholarship by the Winston Churchill Foundation, which provides 16 science, technology, engineering and math students in the United States the funds to study abroad at Cambridge University’s Churchill College. She was also honored as one of the American Institute of Aeronautics and Astronautics 20 Twenties, a group of 20 students from across three continents who are recognized for outstanding scholarship, research or design projects and civic contributions.

Habib has worked as an image processing intern on NASA’s OSIRIS-REx mission since her freshman year. She has also completed internships or co-ops everywhere from NASA’s Glenn Research Center in Cleveland, Ohio, to MIT’s Lincoln Laboratory in Lexington, Massachusetts.

“Every place can teach you something new, and you have new opportunities, or even different perspectives on how to do the same thing,” Habib said. “I like adventuring and exploring and seeing all sorts of different experiences.”

As she sets off on her newest adventure overseas, she said it’s the friends and mentors she met

in college that she’ll miss the most.

“The best thing about UA for me is the people I met here,” she said. “Without those people, I wouldn’t have the opportunities I did.”

After graduation, Habib is headed off to Cambridge University in England to pursue an MPhil in astronomy at the Institute of Astronomy. After that, she’s leaning toward returning to the United States for her PhD. And after that? For someone who wants to stay involved in space missions, not even the sky is the limit.