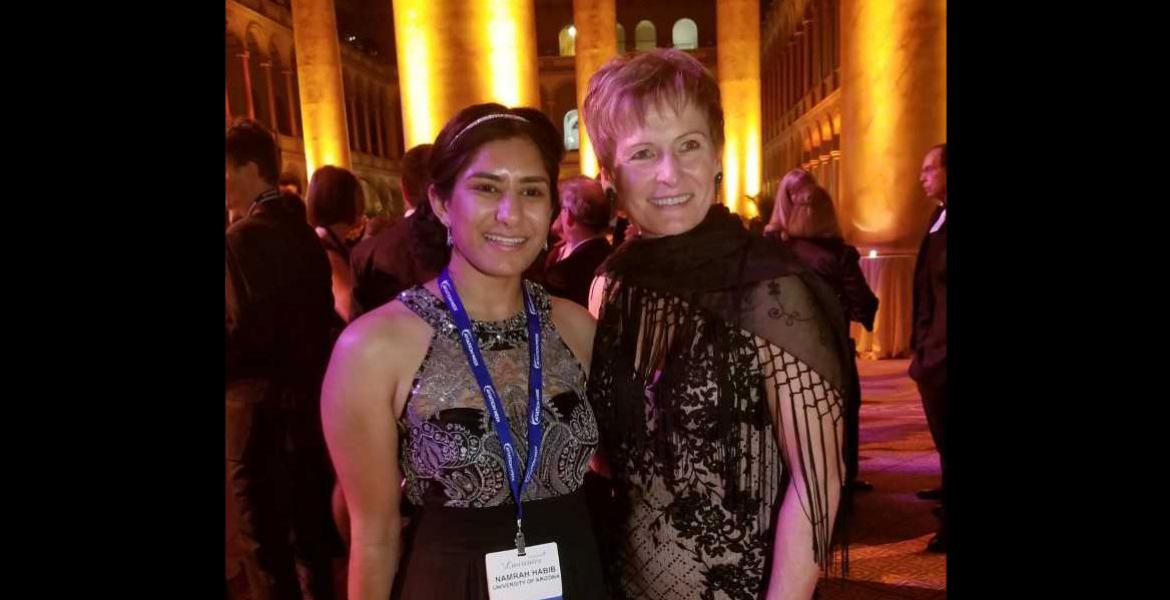 By
Emily Dieckman
Time to read
1 minute
Print
a- a+
Read so far
Passionate undergrad recognized for excellence in the lab, the classroom and the world.

Namrah Habib, a senior majoring in aerospace engineering and chemical engineering, has been recognized as one of the American Institute Aeronautics and Astronautics “20 Twenties,” a group of 20 students from across three continents who are recognized for their outstanding scholarship, research or design projects and civic contributions. She and the other awardees were honored during Aviation Week’s 61st Annual Laureates Awards in Washington, D.C., on March 1.

This comes hot on the heels of Habib’s designation as a 2018 Churchill Scholar by the Winston Churchill Foundation, an award that will fund a year of master’s study in astronomy at the Institute of Astronomy at Cambridge University.

In her not-quite five years at the UA, she has completed an internship at MIT’s Lincoln Laboratory and both an internship and a co-op with NASA. She’s has also interned at the UA’s Lunar and Planetary Lab since her freshman year, currently working as an image processing intern on the NASA OSIRIS-REx mission. She even had the opportunity to attend the spacecraft’s launch in September 2016, where she remembers the excitement being palpable.

“I felt like I was vibrating,” she said. “I could feel everybody’s excitement and energy.”

Her mentor on the OSIRIS-REx mission and senior staff scientist at the UA’s Lunar and Planetary Laboratory, Daniella N. DellaGiustina, said Habib is her go-to person for figuring out many tough-to-solve problems.

“Because she possesses problem solving skills that are on par with an early career professional engineer or scientist, I can really trust her to tackle something that no one else on our team has figured out yet,” she said.

Habib is also the recipient of the 2015 Universities Space Research Association Frederick A. Tarantino Memorial Scholarship Award and an Astronaut Scholarship from the Astronaut Scholarship Foundation. She is a member of the Tau Beta Pi engineering honors society and on the university’s Women in Engineering Programming Board. Not to mention she’s multilingual, likes to read books like Crime and Punishment in her spare time and that she practices Brazilian jiu jitsu. She’s passionate about encouraging other young women to pursue careers in STEM.

“Sometimes the best way to do that is to show how excited I get about science,” she said. “It doesn’t even have to be science. I try to tell them it’s not just solving a problem, not just doing math over and over again. You could be building, you could be programming, you could be experimenting, you could be operating a system. That’s what I try to show them.”