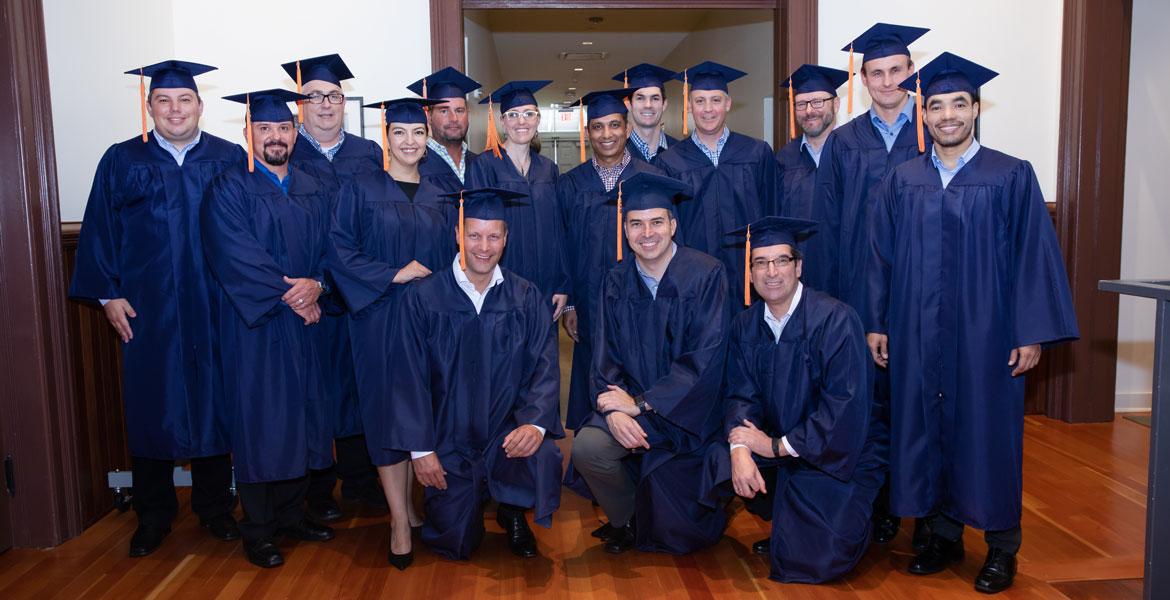 The third class of Mining 360 celebrates their graduation.

By
Emily Dieckman
Time to read
3 minutes
Print
a- a+
Read so far
Caterpillar workers from all over the world immerse themselves in the world of mining and earn University of Arizona certificates.

Caterpillar Inc. supplies equipment such as trucks, dozers and hydraulic shovels to both underground and surface mines across the globe. When some of these customers asked if there might be a way for Caterpillar employees, who don’t work in mines themselves, to have a deeper understanding of the mining industry, Jean Savage, the vice president of Caterpillar’s Surface Mining and Technology Division, turned to the University of Arizona.

Together, Caterpillar and the UA Department of Mining and Geological Engineering launched Mining 360, a one-year certificate program for Caterpillar employees to learn more about the economics and engineering of the industry. The program’s third class of 16 people, representing five countries, graduated in August 2019.

“This program gets better and better, and we have more and more people wanting to get in,” Savage said in her remarks at the ceremony. “I’m depending on you to implement what our customers are asking, and make sure that we take this knowledge into our work to improve the mining industry as a whole.”

Rosa Maria Rojas, lead professor and program manager for the Mining 360 program and assistant professor of practice in MGE, said the program provides Caterpillar employees a chance to “learn the language” of mining engineers.

“This has been an amazing journey where we have all learned from each other, both formally and informally,” Rojas told the graduating class. “We look forward to your contributions to the world of mining.”

The course, conducted mostly online, featured a weekly live discussion and was taught by 12 MGE faculty members, as well as industry guest speakers. It also included four one-week rotations to mines in the United States and Canada, including the UA’s San Xavier mine and the Pinto Valley Mine east of Phoenix. The visits provided a firsthand opportunity to learn about geology, blasting and coal and copper mining.

“Mining 360 is a world-class executive education program,” said class valedictorian Anshu Srivastava, an engineering specialist at Caterpillar. “I thank Caterpillar for choosing to invest in my growth.”

It’s these kinds of partnerships between the UA and our alumni and the companies that we’re working with that are going to make us great. As the dean of this college, I’m committed to mining.”

The employees-turned-students, who had nearly 200 years of experience supporting the mining industry among them, work at Caterpillar in areas ranging from machinery management to sales to surface mining. This year, there was even one specially invited participant from client company Freeport-McMoRan.

The participants agreed that the wide variety of viewpoints meant they all learned more.

“Great experiences made this period of time indescribable and unrepeatable,” said Edwin Daniel Galindo Meza, a process and laboratories chief at Colombian Caterpillar distributor RELIANZ Mining Solutions. “It definitely improved our understanding of the customer’s point of view.”

A Capstone for Capstone

Before they could officially graduate, the students divided into two groups to present final projects. Their task was to provide a mine schedule to maximize the net present value, a measure of profitability, of the Pinto Valley Mine in Miami, Arizona. Capstone Mining Corp., the Canadian-based metals mining company that owns the mine, provided the outline and constraints of the project -- making the project a Capstone capstone, so to speak.

Students learned the myriad factors mine operators must consider to keep a mine running smoothly, from how to apportion available trucks to how to avoid geotechnical disasters like landslides to where and when to transport waste. They also learned about how much factors like the price of copper affect a mine’s profit margin, and how much ore gets lost in processing. Both groups came to similar conclusions about how to maximize the net present value, and Capstone representatives said they were impressed by the students’ presentations.

“It really speaks to the value of diversity of opinion,” said Mike Wickersham, Capstone’s general manager. “This opened up my eyes to some ideas we could us in the operation beyond just my mine.”

The new dean of the College of Engineering, David Hahn, presided over his first commencement at the Mining 360 graduation ceremony in Old Main on Aug. 9. When he decided to take the next step in his career journey with a new leadership role, he explained, he was looking for colleges with just such unique features as UA MGE.

“It has world-class recognition, and that’s something we can leverage to really make MGE the best department in the world,” he said. “It’s these kinds of partnerships between the UA and our alumni and the companies that we’re working with that are going to make us great. As the dean of this college, I’m committed to mining.”

John Kemeny, head of the department, spoke about its long history – the College of Engineering was formerly the College of Mines, one of the earliest parts of the University of Arizona. Programs like Mining 360, he said, help MGE stay abreast of industry demands and keep course curriculum across the department relevant.

The program’s impact reaches far beyond the department where it began, however. Becky Freeman, a representative from Arizona Governor Doug Ducey’s office and UA alumna, also spoke at the ceremony about the governor’s enthusiasm for Mining 360.

“It’s really been a game-changer for our community and the state,” she said, turning to face the graduates. “Welcome to the Wildcat family.”