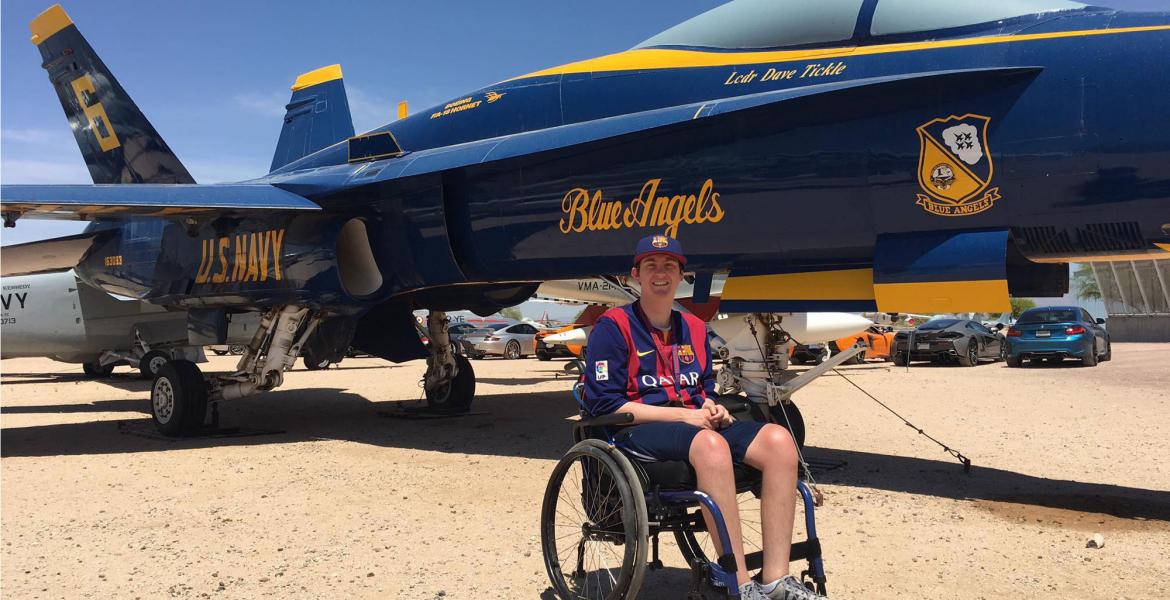 At the Pima Air & Space Museum in Tucson, Arizona, Alex Spartz poses in front of a McDonnell-Douglas F/A-18A Hornet that has the paint scheme of a U.S. Navy Blue Angel.

Alex Spartz spent countless hours as a child watching the planes take off from Sky Harbor Airport in Phoenix with his grandfather, who passed his love of aviation on to his grandson.

“Every Christmas and birthday present I ever got from him was an aircraft set or an aircraft carrier or WWII planes, or a Lego set -- definitely a lot of Lego sets,” Spartz grinned. “I still got presents like that up until my teen years.”

In some ways, Spartz hasn’t changed at all from his days as a Lego aircraft enthusiast. After taking an engineering class during middle school, joining the Arizona Wing of the Civil Air Patrol during high school, and immersing himself in calculus and physics courses, he decided he wanted to be an aerospace engineer.

It was also in his teen years that Spartz’s life changed in a way he never expected.

The summer after junior year of high school, he and his family went on vacation to Hawaii. The first week was incredible: He did an airplane tour of Kauai, and the tour guide let him sit in the co-pilot seat. The next week, he was swimming in the ocean at Kaanapali Beach in Maui and dived into a breaking wave. He underestimated how shallow the wave was, and the dive broke his neck and sent him to the intensive care unit, unable to move his legs or fingers.

It was a month before he was supposed to start his senior year of high school, where he was active on the soccer and swim teams. And he wasn’t about to miss it. He headed back to school in October after completing rehab -- his doctor and four therapists has never seen such a fast turnaround for a young person -- determined to finish his senior year with his friends and go on to college.

Kendall Church, a graduate student at the UA in speech, language and hearing sciences, has been friends with Spartz since his freshman year of high school. He’s always been determined, she said, but watching him learn to flourish in the days -- and the years -- following his accident has been impressive. Right after the accident, she recalled, his goal was to walk again.

“And then he changed his goal to pursuing his dream of being an aerospace engineer, which was even cooler,” she said. “To be able to decide your dreams so confidently has always been impressive to me.”

New Beginnings as a Wildcat

Spartz began looking into nearby universities, knowing that he didn’t want to go anywhere too far away from home while he was still adjusting to his new life.

“My parents met at the UA, so they were both Wildcats, and I’d always leaned toward going here,” he said. “But the main factor in me deciding to go here was the Disability Resource Center. The UA has the best disability community for a college campus definitely in the United States, and probably in the world.”

He headed to Tucson, enrolling in the College of Engineering as an honors student in 2015, going on to join the Department of Aerospace and Mechanical Engineering. During his time at the UA, Spartz has helped make the Disability Resource Center even better, acting as an informal mentor to incoming students.

“I tell them which places are accessible, where I like to hang out on campus and which dorms they should choose,” he said. “I’ve gone through a lot of struggles, and I don’t want to see anyone else go through those troubles.”

For several years after his injury, he used a power wheelchair because he didn’t have enough function in his arms and fingers to push himself around in a manual chair. So he spent his summers taking classes and paying visits to the Rehab Institute of Chicago, now called the Shirley Ryan AbilityLab, determined to overcome the stigma that he might not able to take care of himself because of his chair.

“That’s why I’ve tried my hardest during the summers -- not doing internships, but taking classes to try and diversify my academics, and to give potential employers or internship positions a better idea of who I am as a person, rather than who I am as someone with a disability,” he said.

Hard Work and a Bright Future

His work is paying off -- he’s now been getting around in a manual chair for more than a year, thanks to improved function in his hands and arms and the strength he’s built up through working out and physical therapy. He’s active in the college’s American Institute of Aeronautics and Astronautics club and serves on the advisory board for the Office of Diversity and Inclusive Excellence to help spread awareness about issues faced by the disability community. He’s considering applying for his UA master’s degree in aerospace engineering as well, and hopes to work for a company like Boeing, NASA, Lockheed Martin or Honeywell.

Spartz said he’s grateful to have a support system that has been with him since day one. In fact, many of his friends from high school are at the UA as well. He’s also gained some new fans along the way, like Jeff Goldberg, interim senior vice president for academic affairs and provost of the University of Arizona and former dean of the College of Engineering.

“Alex has had hundreds of opportunities to give up, become bitter and simply feel sorry for himself, but, instead, he did just the opposite,” Goldberg said. “His dedication and drive to be a leader have overcome these feelings, and he is a role model of what can be done when you really set your mind and heart to a task.”