By
Jill Goetz
Time to read
2 minutes
Print
a- a+
Read so far
Geomechanics expert and industry veteran plans to expand curriculum and boost research and tech transfer.

John Kemeny, a longtime faculty member in the University of Arizona department of mining and geological engineering, or MGE, became chair of the department on Jan. 5, 2015. 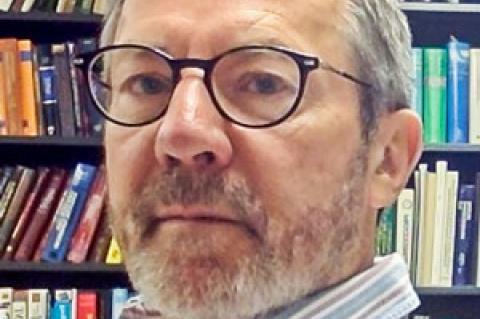 He succeeds Mary Poulton, who chaired the MGE department for 14 years and is director of the UA Lowell Institute for Mineral Resources.

“Obviously, succeeding Mary Poulton is a hard act to follow,” Kemeny said. “Her achievements are unbelievable -- building the diversity and visibility of our department both on campus and nationally, strengthening our undergraduate program, improving infrastructure in our rock lab and the San Xavier Underground Mine, and engaging the mining industry, to give just a few examples. I want to thank her and associate department head Moe Momayez for their leadership and for a department that is in excellent shape.”

Kemeny researches technologies that better characterize rock and more efficiently fracture rock (such as blasting, crushing and grinding), particularly for the mining industry. In his research, for example, he and his students are using light detection and ranging, or LIDAR, remote-sensing systems to evaluate rock characteristics; wireless sensors to measure slope stability; and digital image processing to predict rock fracturing and improve efficiency of mine-to-mill operations.

Kemeny’s goals for the department include building the curriculum and expanding cross-disciplinary and cross-cultural research initiatives, to increase opportunities for students and faculty and to tackle the global problems of sustainable resource use.

His ideas include a new master’s degree in tunneling, a multidisciplinary research center in geomechanics, and expanding online and distance-learning offerings, all in collaboration with other UA departments, such as civil engineering and engineering mechanics, chemical and environmental engineering, systems and industrial engineering, and geosciences.

“The focus of this department should always be mining engineering, where we have a long history and many strengths and collaborations,” Kemeny said. “But our College stands to gain much by pursuing new directions in teaching and research.” Such gains could include increased enrollment and research and scholarship funding.

From the Theoretical to the Commercial

After earning a bachelor’s degree in geology and mathematics from the University of California, Santa Barbara, and master’s and doctoral degrees in materials science and mineral engineering at UC Berkeley, Kemeny worked as a math analyst at a geomechanics firm and as a postdoctoral research fellow at UC’s Lawrence Berkeley Lab. He joined the UA College of Engineering in 1989.

It was early in his UA career that Kemeny, working with three graduate students on imaging of rock fragments, developed software to help mining companies better assess the size distribution of rock fragments after fracturing.

“We joined with students in the Eller School of Management, who drew up a business plan that was ultimately successful,” he said.

As a direct result of the UA effort, in 1997 Kemeny and his students founded Split Engineering, a Tucson-based systems and software company. Split has offices in Chile and South Africa, with clients that include some of the world’s largest mining companies and annual revenues exceeding $2 million. Kemeny said his extensive industry contacts should enhance the department’s reputation and job opportunities for its students and alumni, who already enjoy a job-placement rate nearing 100 percent.

Kemeny said he also looks forward to helping fellow faculty and graduate students advance their research goals and bring their ideas to market, by assisting with writing collaborative grant proposals and securing funding. The Lowell Institute’s Mary Poulton, whose projects include helping develop a new UA Mining Innovation Hub in collaboration with Tech Launch Arizona and Tech Parks Arizona, said that Kemeny is a great asset for students and for researchers with entrepreneurial aspirations.

“I have known John Kemeny since he joined our department, and we have worked together closely, team teaching and collaborating on research,” she said. "He has always been innovative in his teaching, and his research has spanned the theoretical to the commercial.”

As department head, Kemeny will continue teaching courses on geomechanics, conducting research, presenting at conferences of the American Rock Mechanics Association and many other national and international professional organizations, and keeping tabs on his company.