By
Pete Brown
Time to read
2 minutes
Print
a- a+
Read so far
More than 500 alumni, faculty, staff, students and friends of the College of Engineering packed into the student union ballroom Nov. 9 for the 49th annual Engineers Breakfast. 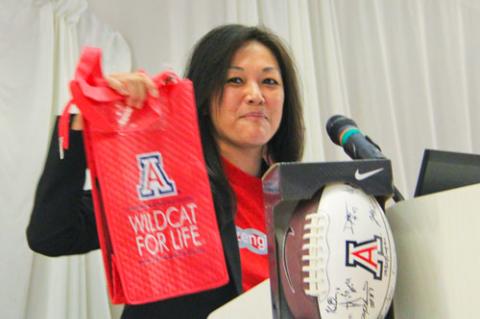 Bear Down Award winner Cindy Klingberg at the 2012 Engineers Breakfast.

Norling's talk focused on the woeful state of the U.S. healthcare system, or, in his words, lack of system, which he said was encapsulated in a quote by "Missouri philosopher" Yogi Berra: "If you don't know where you're going, you're likely to get there." Engineers, Norling said, have crucial roles to play in healthcare, particularly in the areas of informatics and analytics, process improvement, design of environments, reliable execution and automation, and translational research.

University of Arizona President Ann Weaver Hart introduced the UA Engineering alumni being honored this Homecoming. "We recognize the tremendous legacy that our alumni pass on to us," she said, acknowledging that the faculty, staff and students of the College "understand what it means to preserve and advance that legacy."

The 2012 Alumnus of the Year award went to Dave Crawford. Before he earned his bachelor's degree in civil engineering from the UA in 1972, Crawford worked as a concrete laborer with The Sundt Companies Inc., headquartered in Tucson, Ariz.

Since then, his degree and professional talents have launched a stellar career. Today, he is president and CEO of Sundt Construction Inc., one of the largest and most respected general contractors in the nation.

Throughout his career, Crawford has represented his Wildcat roots well. He is a registered professional civil engineer in three states -- Arizona, Colorado and Texas -- and is considered one of the nation's leading experts on alternative project delivery methods in construction. He is actively involved in this effort in several states and on the federal level.

Crawford has advocated for and supported his alma mater by hiring fellow Wildcats, and by playing a key role in Sundt's philanthropic investments in the UA, including support for the colleges of Engineering, Architecture and Landscape Architecture, Fine Arts, Medicine, and Science, and Arizona Athletics.

Crawford's passion for his field is evident, as he also gives of his time to a number of professional organizations and boards. He is a member of the Arizona Builders' Alliance, the American Concrete Institute, and the Alliance for Construction Excellence, and is on the board of directors for the Design Build Institute of America. He finds time to sit on the boards of several community organizations, including the Crisis Nursery and the YMCA of Phoenix.

Bear Down Award winners Cindy and Dan Klingberg are known for their tireless support of the UA's College of Engineering and are model alumni. Not only have they achieved success in their own careers, but they also find ways to connect with the University that gave them the foundation for that success by giving back through their time, talents, and treasure.

Jeff Goldberg, dean of the College of Engineering, said the couple shows their support in numerous ways, including "by establishing an endowment in the College, organizing their colleagues from Raytheon to attend various College events, and devoting time to serve on alumni boards."

Cindy is particularly active in Raytheon's campus recruitment efforts, and serves as a judge at Engineering Design Day. Both are active with the da Vinci Circle, the annual giving society of the College of Engineering whose funds support faculty and students.

Michael Arnold, chair of the da Vinci Circle board, has called the Klingbergs' support "unwavering," adding they not only contribute financially, but also by serving as board members and on the selection committee for da Vinci Scholars. Dan even took the extra time to develop a quantitative scoring system for the committee to remain entirely objective during the selection process.