By
Jill Goetz
Time to read
2 minutes
Print
a- a+
Read so far
The expert in water contamination, who has advised a number of organizations at home and abroad, expands his work with the U.S. Environmental Protection Agency.
In the latest of several high-level positions, Shane Snyder, professor of chemical and environmental engineering at the University of Arizona, is serving a three-year term on the Safe and Sustainable Water Resources Subcommittee of the U.S. Environmental Protection Agency’s Board of Scientific Counselors.

“Dr. Snyder’s expertise in the measurements and quantification of human health and ecosystem vulnerability to chemicals and pathogens, as well as his research interests in identification, fate and health relevance of emerging water pollutants, will assist the EPA Office of Water in addressing their programmatic challenges,” said environmental scientist Cindy Roberts, the subcommittee’s designated federal official. 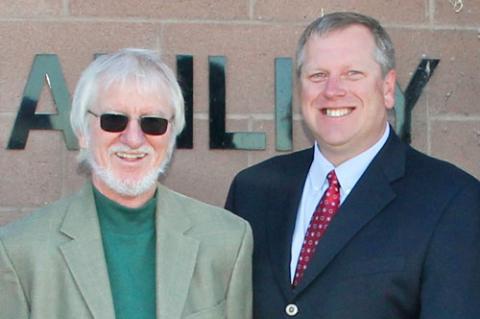 Ian Pepper (left) and Shane Snyder co-direct the UA WEST Center.
The Board of Scientific Counselors -- which is made up of science and engineering experts from academia, industry, government and nongovernmental groups -- advises the agency’s Office of Research and Development. Snyder’s appointment took effect January 12, 2015.

A Font of Knowledge and Experience

Snyder co-founded and developed the Applied R&D Center for the Southern Nevada Water Authority before joining the UA College of Engineering in 2010. He holds joint appointments in the department of soil, water and environmental science and the Mel and Enid Zuckerman College of Public Health and co-directs the University’s Laboratory for Emerging Contaminants and the Water and Energy Sustainable Technology, or WEST, facility.

Snyder also serves on the Drinking Water Committee of the EPA’s Science Advisory Board and the Drinking Water Advisory Group and Water Reuse Guideline Development Expert Panel of the World Health Organization. He was a member of the National Academy of Sciences’ National Research Council Committee on Water Reuse and has testified three times before the U.S. Congress on water quality issues.

In the last year alone, Snyder, who is a visiting professor at the National University of Singapore and an adjunct professor at the Gwangju Institute of Science and Technology in South Korea, has presented at professional and academic conferences in more than a dozen countries. He is board certified by the American Academy of Environmental Engineers and Scientists, was listed as one of the “30 Leading Water Researchers” by Lux Research in 2013, and won the Best Paper Award from the Journal of the American Water Works Association in 2012.

Much of Snyder’s work is supported by the WateReuse Research Foundation, and he is one of the principal investigators on the team behind a major initiative by the foundation to build public support for reusable drinking water. The team has just released a communications and outreach plan in support of the foundation initiative: “Model Communication Plans for Increasing Awareness and Fostering Acceptance of Direct Potable Reuse.”

On campus, Snyder and College of Agriculture and Life Sciences professor Ian Pepper, an internationally known microbial water contamination expert, co-direct the UA WEST facility, which is scheduled to open in early April 2015.