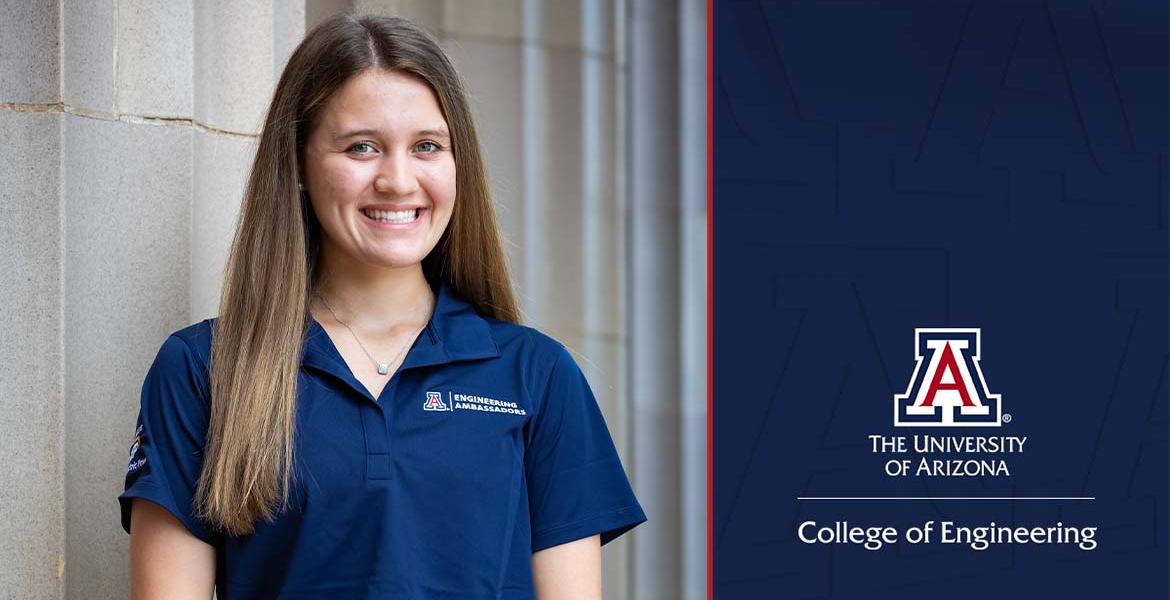 During Katelyn Rees’ first semester at the University of Arizona, she found her vector calculus class challenging at first. So she worked hard to master the material. Not only did she earn an A, she impressed her instructor, senior lecturer Mariamma Varghese, so much that Varghese hired Rees as a teaching assistant, citing her organizational skills and efforts to help her classmates.

“Although my purpose was to help other students learn, it also reinforced the material for me, and I’m grateful because I’ve used vector calculus in a lot of my following classes,” said Rees, a junior double majoring in mechanical engineering and computer science.

Now Rees is taking her drive and desire to serve to the statewide stage. She’s been appointed to a two-year term as one of two student regents for the Arizona Board of Regents, the governing body presiding over the state’s three public universities.

For the first year, Rees will not cast votes, giving her time to learn about ABOR processes and establish communication pathways with the students she will represent and her board colleagues.

“In the first year, I hope to gain experience and confidence as a decision maker,” she said.

Once she is a senior, Rees will have full voting rights. Her priorities include increasing transparency between students, regents and lawmakers. She’d also like to play a role in better promoting in-state options to Arizona students choosing universities. Though she acknowledges it’s a difficult task, Rees hopes to help increase the number of women and other underrepresented populations who pursue STEM degrees.

“It’s important to encourage students to pursue majors they’re genuinely interested in, even if they’re challenging, and give them the support necessary to do so successfully,” she said.

“In class, when we are doing group work, Katelyn makes an extra effort to make everyone feel included. She is always willing to help any of her classmates,” he said.

Papajohn also noted Rees’ volunteer work as an Engineering Ambassador, a group of students who represent the college at recruitment and alumni events. They also give campus tours to prospective students and their parents.

“As an Engineering Ambassador, Katelyn seeks to connect with students from a variety of backgrounds. She wants everyone to feel welcome in the College of Engineering,” Papajohn said.

Rees’ road to ABOR began with a nomination from her ambassador peers. Her application was then selected by the Associated Students of the University of Arizona and sent to Gov. Doug Ducey. The governor interviewed Rees and chose her for the role. Finally, she was confirmed by the Arizona Senate, joining Northern Arizona University student Rachel Kanyur on the board.

“Katelyn is a dynamic and driven student leader,” stated Ducey in a news release. “She is an influential member of many university programs and community organizations, and I’m sure her achievements will only continue to grow. As the Board of Regents’ newest member, Katelyn has the skills and experience to represent Arizona’s university students in this critically important role.”

Rees is also a member of Chi Omega sorority, a student of the W.A. Franke Honors College, and was granted early membership into the national engineering honor society, Tau Beta Pi. She hopes to pursue a career that combines math and science with creativity and is considering options in software engineering, robotics, autonomous vehicle design, or perhaps even becoming a Disney Imagineer.

Rees, as a future engineer and demonstrated leader, has much to offer as an ABOR student regent, according to College of Engineering Craig M. Berge Dean David W. Hahn.

“Engineers make a big difference in the world, and Katelyn is off to an impressive start. Her priorities are well-aligned with those of the College of Engineering, where we highly value diversity and inclusion, and we’re proud she is representing the college during our period of significant expansion, as well as the university as a whole,” Hahn said.

Papajohn expressed confidence in Rees’ ability to make the most of the opportunity, for her future and for the students she will represent.

“This is an opportunity for Katelyn to be around experienced leaders. She will grow her own leadership skills in the process and bring that back to her campus involvements and into her engineering career,” he said.