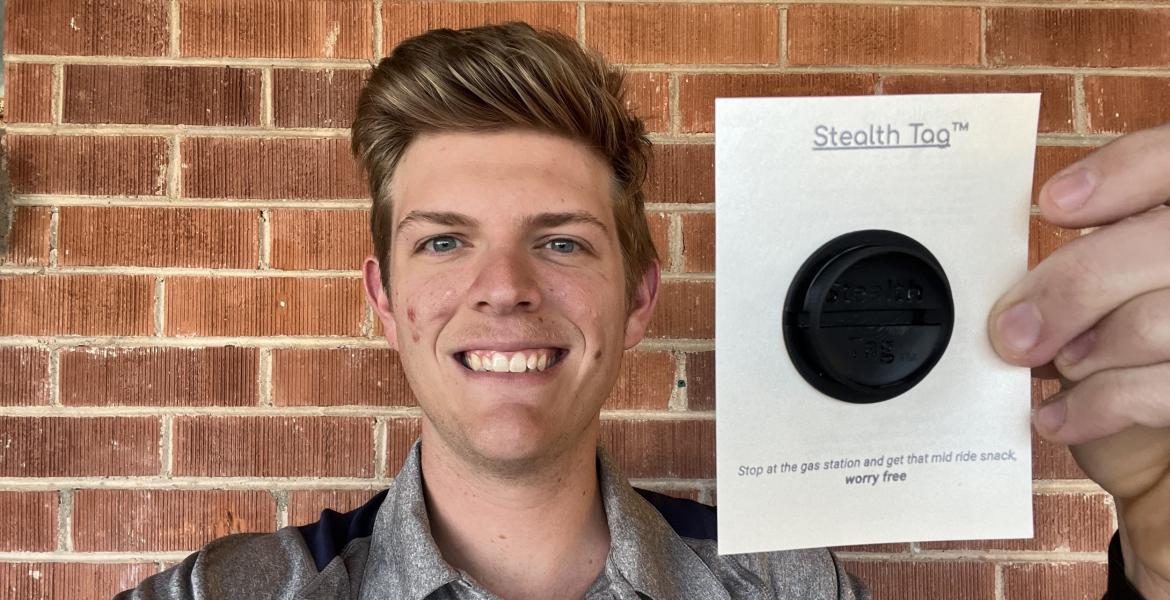 By
University of Arizona College of Engineering
Time to read
3 minutes
Print
a- a+
Read so far
Biomedical engineering senior launches a company to combine his passions for cycling and additive manufacturing.

For the first few years of college, Spencer Ciammitti raced mountain bikes professionally around the country as part of the Bear National Team. Now, he’s a biomedical engineering major and the vice president of the University of Arizona cycling team, where he helps with the mountain bike program. He is also a member of the Medical Device Club, formerly serving as the outreach coordinator.

During the pandemic, Ciammitti took a BME course that involved using 3D printers in the Peter and Nancy Salter Medical Device Design Lab. He was fascinated by the process of going from computer design to a physical object so quickly, and – stuck inside during the pandemic – bought his own printer for a few hundred dollars to experiment with at home.

He recently designed a product called Stealth Tag, which allows cyclists to track the location of their bikes if they are stolen. About the size of a bottlecap, StealthTag is designed to hold an Apple AirTag, a small tracking device released in 2021. It allows users to secure and hide the tracking device in the bike’s steerer tube. Ciammitti began selling the 3D-printed device for $15 in January 2022.

How did the idea for Stealth Tag come about?

The idea really came to me a couple years ago when I got my racing bikes stolen. Us cyclists have expensive bike computers that tell us where we are on the roads and trails. I found it interesting that no one had implemented that technology into a hidden device in the bikes to track them in case they were stolen. When I got into 3D printing, the Apple AirTag system had just been released and, conveniently, they were the perfect size to hide away in a bicycle fork.

What has the reception for the product and company been like so far? Do you have future plans for the device?

Reception has been great for the product. I never expected such a big response, so fast. I sold over 400 tags in the first month, and had to buy two new printers to keep up with production. I even started an LLC, S3D Manufacturing, to make some money back from what started as a hobby. I got to work my first expo booth at the legendary 24 Hours of the Old Pueblo, and it was a really humbling experience to see how people thought it was so cool and innovative. I am currently expanding the Stealth Tag line and making it work with any type of bike (road, mountain, commuter, etc.).

In the future, I really hope to continue selling and growing the company and the products and services I can offer, until a larger bicycle company acquires it. As it’s a one man show right now, I can only do so much, and a larger partner would really help spread Stealth Tag across the world!

Why did you choose to major in biomedical engineering at the University of Arizona?

I chose the University of Arizona after looking at a couple schools for engineering, due to the amazing faculty, opportunities for extracurriculars, and the cycling community in Tucson, as I used to race professionally. The UA also offered a generous scholarship, which helped entice me to move. I hopped around a few different colleges at the UA before landing in biomedical engineering. I loved the math side of engineering, and the biology and chemistry of physiology. BME is the perfect blend of those two fields, and I could not be happier now that I chose it!

What advice would you give to a student starting out as an engineering major, or considering a major in engineering?

The major piece of advice for students starting out or wanting to join the College of Engineering is to know that your first two years are going to feel hard. There is light at the end of those two years, but it really comes from learning how to fail, and what you need to do to succeed. I almost failed out of my first semester in the College of Engineering simply because I was too proud to go to the amazing faculty and resources the college had to offer, like ThinkTank, SI sessions and engineering clubs.

Don’t be like me: Take the resources they offer seriously, and use them! It's super cliche and everyone tells you to do this, but there is a reason. With that being said, engineering is a lifelong learning process, and the only way to grow is through failure and what you do to fix it. Failure is different for everyone, but it will come in some shape or form while you are here at the UA. It is just up to you on how you deal with it.