Home / Stories / Engineering Student Digs In to the Finances of Mining

Engineering Student Digs In to the Finances of Mining

By
Jill Goetz
Time to read
2 minutes
Print
a- a+
Read so far
A UA undergraduate determined to learn the business side of mining crafts the perfect experience -- an internship with global mining consultant Behre Dolbear.

University of Arizona mining engineering students are known for their passion about mining, commitment to learning, and resolve to get where they are headed. One such student eager to learn the financial aspects of mining has been particularly tenacious. 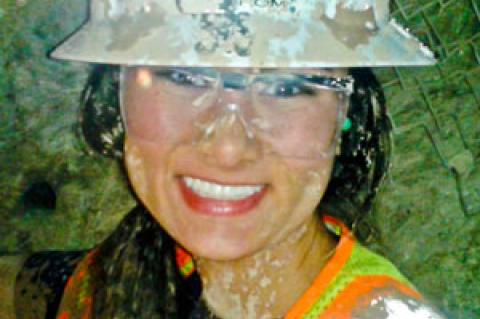 Alyssa Hom is no stranger to the muck of mining.

No particular internship had been advertised, but Alyssa Hom found Behre Dolbear’s CEO Karr McCurdy on LinkedIn and messaged him several times last winter about working with the company’s financial advisers.

“BD has mining industry experts working around the world, and I was hoping to learn from them,” said Alyssa Hom, who is scheduled to receive her BS in mining engineering in December 2016.

Finally McCurdy set up a meeting with her in Denver at the company’s booth during the March 2015 annual conference of the Society of Mining, Metallurgy and Exploration. Hom is a member of the UA’s award-winning SME chapter.

Behre Dolbear moved its conference booth at the last minute, and Hom thought she’d missed her chance. But McCurdy sought her out later at a conference social event, and after a brief chat, he offered her a summer internship at the company’s Denver headquarters.

“I am just an undergraduate,” Hom thought, “and a CEO is asking to talk to me!”

“Alyssa was actually offered three internships this past summer, from different companies around the country,” he said. “Our department enjoys a diverse student population that seeks challenges well outside their comfort zone. Employers value our students’ positive attitude, skills and outlook toward both life and the mining industry.”

Hom helped produce and market Where to Invest in Mining 2015, Behre Dolbear’s latest annual ranking of countries’ investment potential for the mining industry. She conducted research and collected input from 200 Behre Dolbear employees around the globe who assessed investment potential based on countries’ political and economic systems, currency stability, permitting, taxation, corruption and social license (public acceptance of foreign-operated mining operations). As in most of its previous rankings, the company named Canada, Australia, the United States, Chile and Mexico the top five best bets for mining investors.

“My UA classes provided a general understanding of the U.S. mining industry, but it wasn’t until I completed my internship that I understood the financial aspects of global mining,” Hom said. “I remember reading a commodity analysis and having no idea what it meant. Karr McCurdy explained the relationship between the strength of the U.S. dollar and the price of commodities. He taught me the importance of understanding how volatile commodity prices are, and how we can best predict future prices based on older price trends.”

Back at the UA, Hom is doing research in Momayez’s lab on chemical processes to break rocks more efficiently, training math tutors in the department of mathematics, volunteering at the UA’s San Xavier Underground Mine, and representing the College as an Engineering Ambassador. She looks forward to pursuing new opportunities at the SME annual conference in Phoenix in February 2016.

“The business aspect of mining is very interesting and exciting,” Hom said. “However, I hope to have a more technical-oriented internship next summer to get a taste of the other side of mining.”