By
Karina Barrentine
Time to read
1 minute
Print
a- a+
Read so far
Appreciation for a man who has been described as an Edisonian engineer, a one-man whirlwind, homegrown entrepreneur, and the quintessential industry partner, was universally apparent on the faces of alumni and friends of the University at the recent dedic 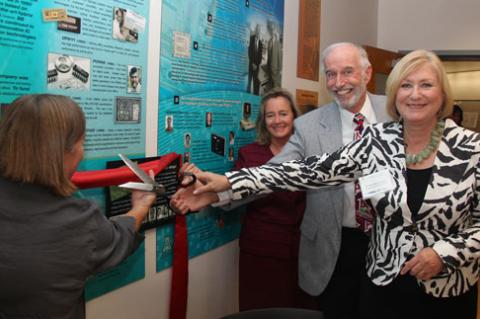 In a fitting tribute to Brown, who with a lot of hard work and a bit of good luck morphed a garage startup into one of Arizona's most successful high-tech electronics firms, UA President Ann Weaver Hart, in her inaugural visit to the electrical and computer engineering building, described the Burr-Brown years as a time when the "real rubber hit the road."

The ongoing public-private relationship between the University and the Brown family, Hart said, shows how we achieve dreams through shared resources. Tom Brown "truly understood the importance of that type of partnership: in recruiting and retaining the best faculty, in being able to give financial aid to the best students, and in building programs."

The Thomas R. Brown Foundations has endowed numerous professorships and student scholarships in the UA's College of Engineering, College of Science, and Eller College of Management.

Brown, who died in 2002 at the age of 75, founded Burr-Brown Research Corp. in 1956 with friend Page Burr, whom Brown later bought out. The company, one of world's largest suppliers of high-performance analog semiconductors, was sold to Texas Instruments 12 years ago in a stock deal worth more than $7 billion, the semiconductor industry's largest-ever acquisition at the time.

On hand for the Aug. 29 dedication were trustees of the Thomas R. Brown Foundations, including Brown's daughters Mary Brown Bernal and Sarah Brown Smallhouse, UA faculty and staff, retired Burr-Brown employees, and former and current Texas Instruments employees. Many in attendance not only were longtime Burr-Brown employees, but also they were graduates of the UA College of Engineering.

"My father's success in business prospered because of the close relationship he developed with the UA. The UA gave Burr-Brown its competitive edge to rise to global excellence," Smallhouse said.

The conference room, which has been more than a year in the making, shows the close ties between Burr-Brown and the University over the years. Colorful graphic panels chart the Burr-Brown history decade by decade, and one panel highlights the work of Linda Powers, who holds the Thomas R. Brown Chair in Bioengineering.

Retired Burr-Brown and Texas Instruments engineer Paul Prazak, who managed the room's design with the help of former colleagues, and Jerzy Rozenblit, former head of the electrical and computer engineering department, spearheaded the project.