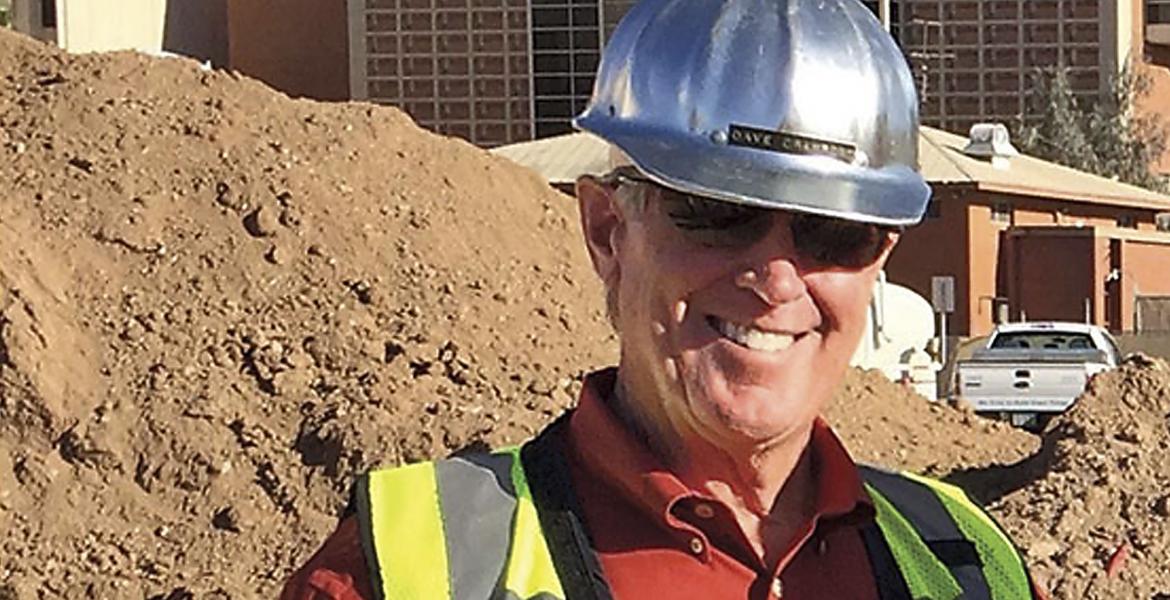 Dave Crawford where it all began, as a laborer on a construction site.
Home / Stories / Construction Magnate Set to Take Students’ Questions at UA Engineering Leadership Q&A

By
Jill Goetz
Time to read
2 minutes
Print
a- a+
Read so far
Civil engineering alumnus Dave Crawford grew Sundt into one of the nation’s largest construction firms and changed the industry for the better. On Feb. 26, students can quiz him on what it took and what they might expect in their own careers.

Dave Crawford knows what it takes to advance to the top in a competitive and volatile industry. He started out at Sundt Construction working as a laborer while earning a BS in civil engineering and became the company’s CEO in 2011.

“When he walks through a room, people want to talk to him,” Bel-Aire Mechanical president and CEO Jim Dinan said in an ENRSouthwest article about Crawford’s Engineering News-Record’s 2017 Southwest Legacy Award.

During his rise to the top, Crawford transformed how construction projects are delivered, from traditional design-bid-build models to more team-based approaches that span all phases of building.

“Alternative delivery enables you to create a circular table, and everybody contributes to the success of the project,” Crawford has said.

UA students will have the chance to question Crawford on Feb. 26 at his talk, “From Construction Site to Corner Office,” from 5:30 to 7 p.m. in the Student Union Memorial Center’s Union Kiva. The event, part of the College’s Lessons in Engineering Leadership speaker series, is free and open to the public, but registration is required. Participants are encouraged to submit questions when they sign up. Refreshments will be served.

Breaking Ground and Breaking the Mold

Crawford earned his bachelor’s degree in 1972. To help pay for his UA education, he did construction work for Sundt on the UA’s McKale Center and other notable projects on and off campus. From his freshman year until he retired nearly 50 years later, he remained with the company, rising to ever-higher levels of responsibility.

Under his leadership the 100-percent employee-owned company expanded its work far beyond Arizona and the UA to international locations like Riyadh, Saudi Arabia, and Moscow. Sundt has been widely honored as one of the best places to work, by business publications like the San Diego Business Journal in 2012, and for its safety record -- it is the only company on record to twice win the Associated General Contractors Grand Award for Safety, in 2006 and 2016.

Crawford helped draft and lobby for legislation passed in the Arizona State Legislature in 2000 favoring alternative project delivery methods. He continues advocating for team-based solutions to construction challenges in Arizona and the nation.

He’s also been an avid philanthropist, serving on the board of the Sundt Foundation, which has given more than $7.6 million to hundreds of nonprofits across the U.S. He is active with state and local organizations including Greater Phoenix Leadership, CEOs Against Cancer, the Real Arizona Coalition, YMCA of Phoenix and Expect More Arizona.

For his professional contributions and charitable work, the University of Arizona College of Engineering named Crawford Alumnus of the Year in 2012.

Register today to join the conversation with Dave Crawford on Feb. 26.

On March 28, Laura McGill, Raytheon Missile Systems vice president of engineering, will present the final talk in the Lessons in Engineering Leadership spring series. Register now, and be sure to submit your questions!

The series kicked off on January 29, with a presentation by Microsoft executive and UA engineering alumnus Kurt DelBene.