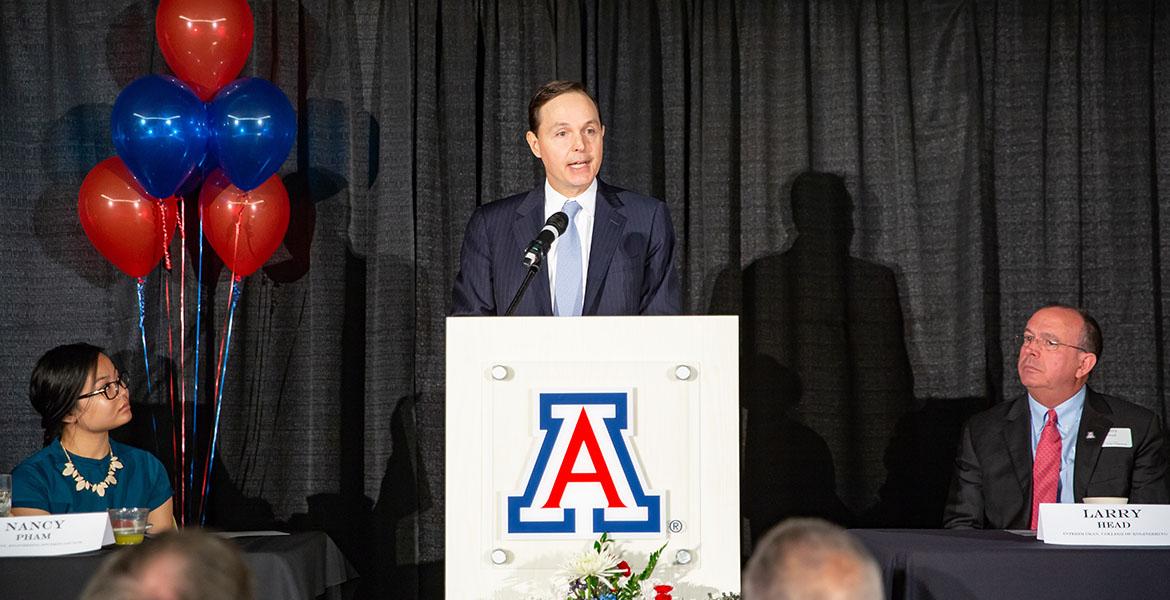 Dylan Taylor accepts the College of Engineering Alumnus of the Year Award at Homecoming 2018. Taylor and his wife, Gabrielle, are making a $1 million gift to create the Patrick R. Taylor Endowed Department Leadership Chair in Materials Science and Engineering.

Dylan Taylor grew up spending time in his father's laboratories at the University of Idaho. When he was ready to attend college for materials science and engineering, his dad, Patrick R. Taylor, made a few recommendations. Among them, the University of Arizona.

In honor of his father, and his alma mater, Dylan Taylor and his wife, Gabrielle, are making a $1 million gift to create the Patrick R. Taylor Endowed Department Leadership Chair in Materials Science and Engineering. Endowed chairs help the university attract and retain distinguished faculty members, as the annual payout from the endowment provides its recipient with unrestricted funding for scientific pursuits.

"My dad has always been a great example of someone who really loves what he does," said Dylan Taylor, adding that the endowed chair was a perfect way to commemorate his father's lasting impact in the field and on his family. "He's been a source of inspiration to me my whole life."

He told his dad about the endowment on Sunday, as a Fathers' Day gift.

"MSE is the department I graduated from, so that's near and dear to my heart," said Dylan Taylor, an Honors College student who earned his bachelor's degree as a Tau Beta Pi in 1993. "The education was first class, and the overall experience was fantastic. I feel a deep sense of gratitude to the university."

The University of Arizona ranks in the top 4% of all U.S. universities in research and development expenditures, according to 2021 data from the National Science Foundation. MSE researchers are working in diverse areas including space mining, quantum science, additive manufacturing and artificial intelligence.

"This gift is remarkable for so many reasons," said University of Arizona President Robert C. Robbins. "Whenever an alumnus chooses to give back, they not only affirm the value of a University of Arizona education, but they also leverage their post-graduation success to benefit the institution in perpetuity. Dylan Taylor has gone one step further by honoring his dad with an incredible Father's Day gift. I am inspired and grateful for this generosity."

Patrick Taylor has had an illustrious career in mining and materials engineering. He currently is the George S. Ansell Distinguished Professor of Chemical Metallurgy, Metallurgical and Materials Engineering and the director of the Kroll Institute for Extractive Metallurgy at the Colorado School of Mines. Previously, he was the Fred N. Peebles Professor and head of the Department of Materials Science and Engineering at the University of Tennessee, and professor of metallurgical engineering and head of the Department of Materials, Metallurgical, Mining and Geological Engineering at the University of Idaho.

Dylan Taylor hopes the endowment will enable the university and college to recruit an internationally known chair with an extensive background in advanced materials. Someone who emulates his father's ability to balance excellence in teaching, research and service would be an especially strong addition to the university, he said.

Creating endowed leadership positions in each of the college's departments is a high priority, said David W. Hahn, the Craig M. Berge Dean of the College of Engineering.

"We are grateful to Dylan and Gabrielle for their generosity in funding this endowed chair, and to Patrick for his exceptional contributions to the field of materials science. I can't think of a better namesake for this chair than Patrick," Hahn said.

Not only would such a hire advance the reputation of the department, but it also would aid in attracting top students who go on to successful careers. Dylan Taylor himself is a global business leader, philanthropist and active pioneer in the space exploration industry. He is chairman and CEO of the global space exploration company Voyager Space Holdings, and was the College of Engineering's 2018 Alumnus of the Year.

"When I chose to study engineering, I knew early on that I wasn't necessarily going to work as an engineer," he said. "But as a base degree, it's phenomenal, because it teaches you how to think critically and how to be a problem solver."

The search for the inaugural Patrick R. Taylor Endowed Department Leadership Chair in Materials Science and Engineering is underway. The new chair will succeed Pierre Deymier, who has served in the position since 2011 and is stepping down and returning to the faculty.