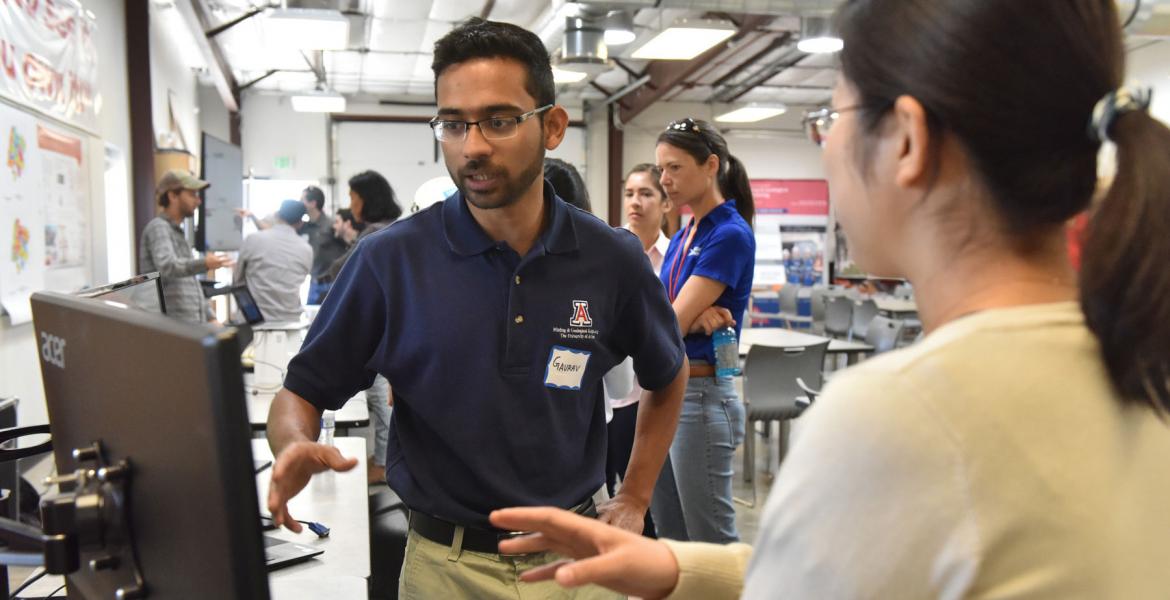 Gaurav Gupta graduated with a master's degree in mining and mineral engineering in 2018.

By
Emily Dieckman
Time to read
3 minutes
Print
a- a+
Read so far
The Freeport-McMoRan Foundation invests in workforce development and innovations in modern mining at the University of Arizona.

A $2.5 million award from the Freeport-McMoRan Foundation will help the University of Arizona advance responsible mining and use of materials through workforce development, research and industry solutions.

"This support is an expression of confidence in and commitment to the UA's mineral resources programs, which reflect the university's unique character – a special location in a world-class mining region, the lead university in one of the world's top mining technology centers, and an exceptionally broad and collaborative university," said Mark Barton, professor of geosciences. Barton is co-director of the Lowell Institute along with Mary Poulton, professor emerita of mining and geological engineering.

The Lowell Institute works to connect the mining and geological engineering program and the economic geology program with other disciplines on campus – such as environmental science, law and public health – to provide solutions to challenges facing the mining industry. The latest example of such a collaboration, for which this award also provides funding, is the Geotechnical Center of Excellence. The center works to ensure the safety and sustainability of mining by developing solutions to mitigate mining risks such as slope failure and underground collapse.

"To me, this support is an investment that the industry is making into helping build stability in the future of mining and academic research," said Brad Ross, director of the Geotechnical Center of Excellence and professor of practice in mining and geological engineering. "This type of investment makes us much stronger and more able to meet the needs of the ever-increasing demand on minerals and mineral resources in our society today."

Researchers in geology, hydrogeology, computer science and multiple engineering fields work on these issues, often in partnership with graduate students, and the center shares research advancements through professional development to bring these innovations into practice.

This type of investment makes us much stronger and more able to meet the needs of the ever-increasing demand on minerals and mineral resources in our society today."

"This generous support from the Freeport-McMoRan Foundation will help advance essential UA priorities: supporting student success, growing the workforce pipeline, and strengthening our global leadership in sustainability and compatible mining," said UArizona President Robert C. Robbins. "This investment in our already outstanding mining engineering, geosciences and geology programs will help the UA make an even bigger impact in an industry that plays an important role in Arizona's economy."

UArizona is home to one of only 13 mining engineering programs in the nation accredited by the Accreditation Board for Engineering and Technology Inc. Thus, it plays a critical role in preparing future mineral resource professionals for a world focused on sustainably sourced materials and technological advancements. The QS World University Rankings place the UArizona mining engineering program as third in the United States and 19th in the world. U.S. News & World Report ranks the UArizona geosciences graduate program as third among U.S. geology graduate programs.

John Kemeny, mining and geological engineering professor and department head, said Freeport-McMoRan's support will be a game-changer for the program.

"Freeport-McMoRan is helping us set up a way to recruit more students and assess the effectiveness of our programs," he said. "They employ a lot of our students, and they want us to continue producing mining professionals at both the undergraduate and graduate levels."

The funding supports scholarships for graduate students in the economic geology program and the mining, geological and geophysical engineering program. It will also help the minerals program pilot new strategies for attracting students and for increasing both philanthropic and research funding.

Richard C. Adkerson, president and chief executive officer of Freeport-McMoRan, explained that UArizona provides a pipeline of well-prepared graduates to the industry.

"As the private sector increasingly competes for STEM graduates, the universities that maintain their mineral-related programs have become critically important in producing a future workforce for the industry," he said.

"The University of Arizona has been a premier partner in this pursuit, preparing and producing the largest percentage of our new graduate hires each year. This new partnership signifies the institution's ongoing and outstanding commitment to supporting an industry that remains a critical part of the American and global economies."

Freeport-McMoRan has partnered with UArizona for more than a decade, having donated more than $6 million to the university since 2005. The company's support of the college goes back even further – Phelps Dodge, a company Freeport-McMoRan acquired in 2007, has been contributing to the university since the 1940s, when it helped fund the construction of the Mines and Metallurgy building. This gift is given specifically through the Freeport-McMoRan Foundation, which is dedicated to supporting the communities where the company operates.