By
Jill Goetz
Time to read
3 minutes
Print
a- a+
Read so far
UA College of Engineering expert in artificial vision systems honored for his inventive and interdisciplinary research and teaching.

Like many men of science, Wolfgang Fink works in diverse disciplines and enjoys eclectic avocations. He’s a physicist, an engineer, an educator, an inventor, a licensed helicopter pilot and a classically trained pianist. You might call him a Renaissance man. 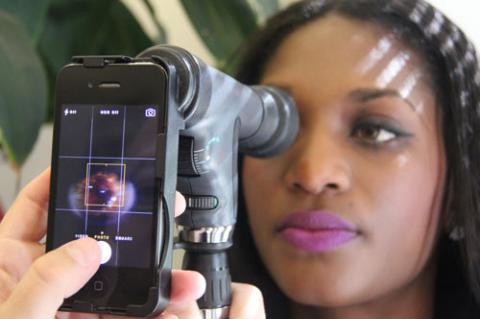 Professor Wolfgang Fink is developing ophthalmic examination devices similar to the one shown here that attach to smartphones for health care providers to conduct eye exams in the field.

Each year, the College selects one member of the Engineering faculty as a da Vinci Fellow in recognition of excellence in teaching or research excellence. The award includes a one-time grant of $10,000 for teaching and research.

“I am very humbled to be named da Vinci Fellow for 2015,” said Fink, who holds joint appointments in the UA departments of systems and industrial engineering, aerospace and mechanical engineering and ophthalmology and vision science. “This award will enable me to pursue bold new ideas that might be considered speculative by funding agencies or are beyond their purview.”

“Through his pioneering work on artificial vision technologies, Wolfgang Fink is taking College and University research initiatives in exciting directions with profound implications for human health,” said Arthur F. Gmitro, the new head of the department of biomedical engineering. “I know Wolfgang to be a committed mentor to students both inside the classroom and out. He is richly deserving of the da Vinci Fellowship, and I look forward to working with him in the department.” 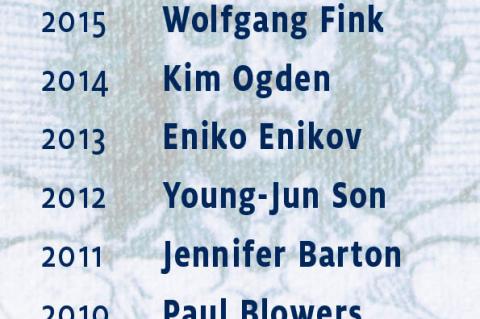 Fink is the founder and director of the Visual and Autonomous Exploration Systems Research Laboratory, where he and his students are building and testing autonomous robotic rovers designed to explore planetary surfaces. He has also developed retinal implant technologies that have helped restore partial sight to the blind. He is now developing “smart ophthalmoscopes” that will allow health care providers to conduct eye exams in remote areas, potentially detecting early symptoms of eye disease in time for patients to seek treatment and avert blindness.

He also teaches two new courses he created, Computational Techniques and Numeric Modeling of Physics and Biological Systems. Students learn the fundamentals of modeling a diverse set of systems in nature and the underlying numeric techniques. They then simulate these models on a computer to solve complex problems in physics, biology, artificial neural networks and other subjects.

Fink was a senior researcher at NASA’s Jet Propulsion Laboratory for nine years before joining the UA faculty in 2009 as associate professor.

Janet Meiling Roveda, UA associate professor of electrical and computer engineering, was part of the team that recommended hiring him.

“Wolfgang’s great passion toward his research in biological system modeling and vision immediately attracted my attention,” said Roveda, who also nominated him for the da Vinci Award. “There and then I knew that he would become a rising star in transdisciplinary research areas.”

“Professor Fink has made exceptionally innovative contributions to diverse areas of technology, ranging from biomedical research to systems for the autonomous exploration of extraterrestrial planetary surfaces,” Baker said. “He has been prolific in both the patenting of his many innovations and in the publication of research results. He is a delightful colleague and an outstanding scholar, well deserving of this recognition.”

Fink holds bachelor’s and master’s degrees in physics and physical chemistry from the University of Göttingen, Germany, and a doctoral degree in theoretical physics from Germany’s University of Tübingen. He is a Fellow of the American Institute for Medical and Biological Engineering, who has received several awards from NASA and won the International “Huygens Probe” Optimization Competition at the 2006 IEEE World Congress on Computational Intelligence in Vancouver. He holds 13 patents for inventions in autonomous systems and biomedical devices, and has visiting appointments at the California Institute of Technology and the University of Southern California.

In addition to his research and teaching, Fink is also the official faculty adviser to the UA student chapter of the National Society of Black Engineers. Earlier this year he coached the chapter to win a national robotics competition.

Top picture: Maria Keonjian and Wolfgang Fink at the 2009 reception announcing Fink as the first holder of the Edward & Maria Keonjian Endowed Chair.