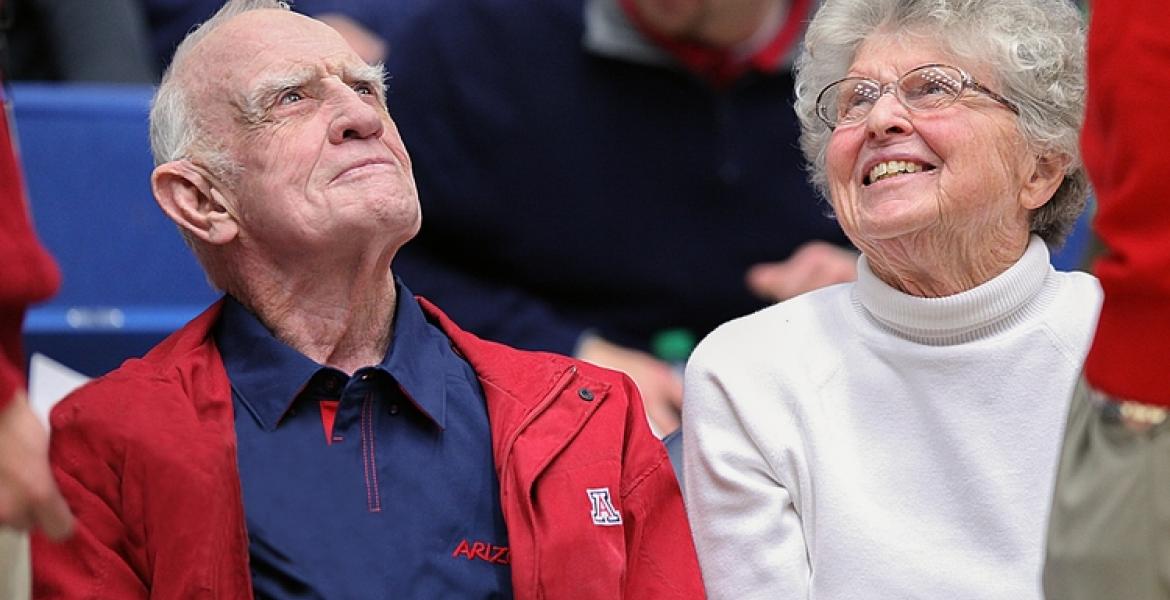 J. David Lowell and his wife, Edith, at a Wildcats basketball game.

By
University of Arizona Foundation
Time to read
2 minutes
Print
a- a+
Read so far
Alumni J. David Lowell and wife, Edith Lowell, named the Lowell Institute for Mineral Resources and co-named the Lowell-Stevens Football Facility.

University of Arizona alumnus and advocate J. David Lowell, considered one of the mining industry's most successful entrepreneurs, leaves a legacy of transformational generosity at his alma mater, where his passing has been met with recollections of his accomplishments and contributions.

Lowell died this past week at the age of 92.

Lowell and his wife, Edith Lowell, are members of the University of Arizona Founders Society, a distinction granted to supporters whose generosity has brought transformative impact.

Their gifts to the College of Science, the College of Engineering and Arizona Athletics have greatly expanded educational opportunities and helped the University of Arizona remain competitive with other Pac-12 teams.

The Lowells' major gifts include establishment of the Lowell Institute for Mineral Resources, which serves as a catalyst for mining innovation, housed in the College of Science. They also created an endowed chair in geosciences in the College of Science. Together with Jeff and Sharon Stevens and other donors, the couple helped make the Lowell-Stevens Football Facility a reality in 2013. Most recently, they created an endowed chair to support the head of the Department of Mining and Geological Engineering. Moe Momayez, associate professor and interim department head, is the first to hold the title.

Lowell, who played football at Arizona, earned a bachelor's degree in mining engineering in 1949 and a professional engineer degree 10 years later. He also earned a master's degree in geology from Stanford University. In 2000, The university awarded Lowell an honorary doctorate in geosciences.

"I'd decided to be a mining engineer as a child and never wavered," Lowell wrote in an Arizona Alumni Magazine article in 2013.

Lowell is credited with discovering the world's largest copper deposit, Escondida in Chile, as well as nine additional mines throughout Arizona and South America. He found several more with contributions from others. Most career explorationists never discover one viable mine.

"He has personally discovered more copper than anyone in history and developed multibillion-dollar gold and copper mines that have changed the economies of nations," Joaquin Ruiz, University of Arizona vice president of global futures and former president of the Geological Society of America, told GSA.

Lowell lived with his wife on a ranch west of Rio Rico, Arizona. He was elected to the National Academy of Engineering in 1999 and was inducted into the American Mining Hall of Fame in 2002 and the College of Engineering Hall of Fame in 2017. He received the Society of Economic Geology Silver Medal, the Mining and Metallurgy Society of America Gold Medal and the Society of Economic Geology Penrose Gold Medal. He wrote an autobiography called "The Intrepid Explorer," published by the University of Arizona Press. Lowell donated his papers to Special Collections at the University of Arizona.

"It was an honor to know David. People will remember his humility and his exceptional loyalty to his family and the university," said John-Paul Roczniak, president and CEO of the University of Arizona Foundation. "The effects of his generosity will continue to reverberate for countless generations to come."