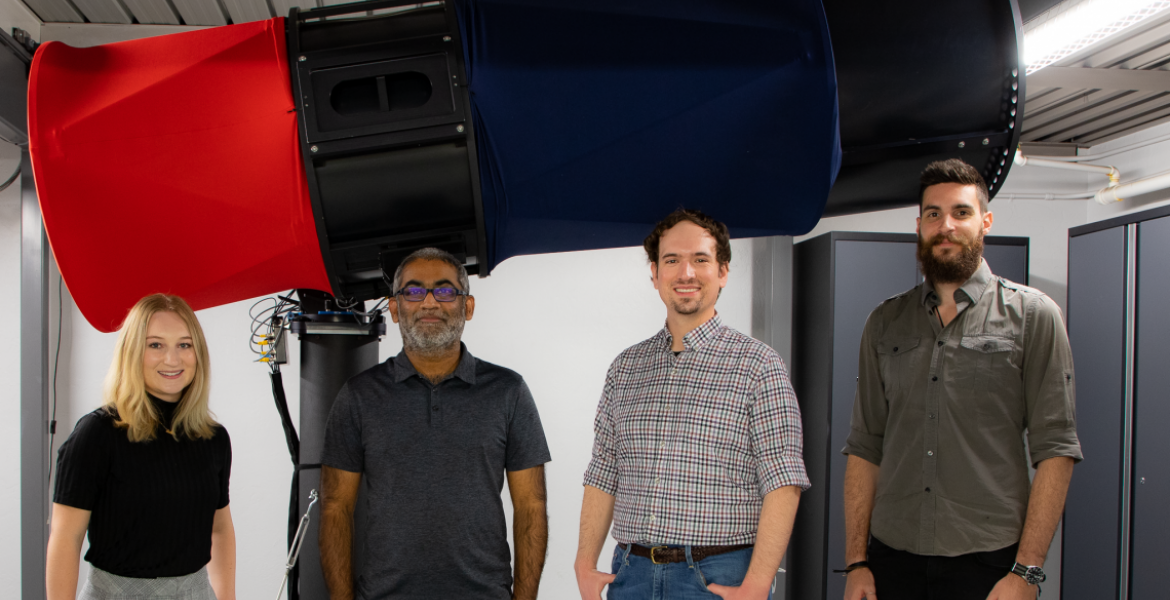 The UA Space Domain Awareness team - including Grace Halferty, Vishnu Reddy, Adam Battle and Tanner Campbell - stand in front of the RAPTORS-1 telescope on top of Kuiper Space Sciences Building. The team confirmed that the rocket booster slated to impact the Moon on March 4 is from the Chinese Chang'e 5-T1 mission and not from a SpaceX Falcon 9.

By
Mikayla Mace Kelley
Time to read
2 minutes
Print
a- a+
Read so far
Students studying the object's composition confirmed that it is most likely a Chinese booster and not a SpaceX booster, as previously reported.

The presumed SpaceX Falcon 9 rocket booster that's on a course to hit the moon March 4 is actually a Chinese booster from a rocket launch in 2014, a University of Arizona team has confirmed.

UA students in the university's Space Domain Awareness lab at the Lunar and Planetary Laboratory have had their eyes on the piece of space junk for weeks as they studied its rotation. They have been gathering other data as well, which they used to confirm its Chinese origin.

"We took a spectrum (which can reveal the material makeup of an object) and compared it with Chinese and SpaceX rockets of similar types, and it matches the Chinese rocket," said UA associate professor Vishnu Reddy, who co-leads the Space Domain Awareness lab with engineering professor Roberto Furfaro. "This is the best match, and we have the best possible evidence at this point."

Reddy and his students are providing observations to NASA's Jet Propulsion Laboratory to help pinpoint the location of the booster's upcoming impact on the moon, which could be imaged and verified by NASA's Lunar Reconnaissance Orbiter.

They estimate that it will hit somewhere in or near the Hertzsprung crater on the moon's far side. The UA is the only public university that has a dedicated academic program for space domain awareness. Its space science program was ranked No. 2 among public U.S. universities and No. 10 in the world in U.S. News & World Report's 2021 Best Global Universities rankings.

"We don't often get a chance to track something we know is going to hit the moon ahead of time," said Tanner Campbell, an aerospace and mechanical engineering graduate student who has worked with Reddy since 2017. "There is particular interest in seeing how impacts produce craters. It's also interesting from an orbital prediction perspective, because it's traveling between the Earth and moon unpropelled. It's just an inert rocket body tossed around by its own energy and by solar radiation pressure, so we can evaluate our models and see how good our predictions are."

Campbell focused on photometry of the object, meaning he determined how fast it spins. Rocket bodies have a distinct pattern of brightness that makes them easily identifiable.

This booster is just one of many pieces of space junk that the UA team and others around the world are tracking. There are roughly 3,500 active satellites orbiting Earth, and another 20,000 pieces of debris or space junk, according to Reddy. There is significantly less space debris surrounding the moon, however.

"While this isn't the most detrimental impact, the idea of so many objects in space with unknown orbits and identities is worrying," said Grace Halferty, an undergraduate student double majoring in mechanical engineering and biology. She has, since September 2018, been studying SpaceX's Starlink satellites and their effect on ground-based astronomy. "We need better space traffic management."