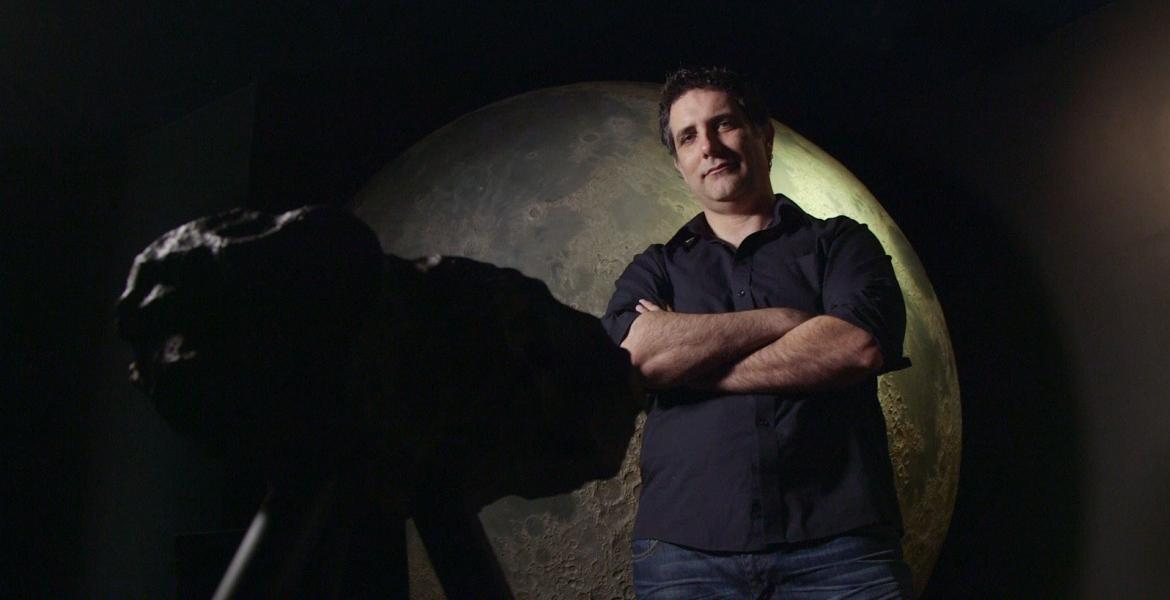 By
Emily Dieckman
Time to read
3 minutes
Print
a- a+
Read so far
Faculty from College of Engineering and Lunar and Planetary Laboratory take another step toward understanding meteor impacts on the moon.

Pink Floyd aside, there isn’t actually a dark side of the moon -- just a side you can’t see from Earth. That is, unless you’re a researcher like those at the University of Arizona and partnering institutions, who are setting out to investigate meteoritic impact on the far side of the moon.

The Lunar Meteoroid Impacts Observer, or LUMIO, project is headed by Francesco Topputo, an assistant professor in aerospace systems at Polytechnic University of Milan in Italy.

Roberto Furfaro, associate professor in the Department of Systems and Industrial Engineering and Department of Aerospace and Mechanical Engineering, and Vishnu Reddy, assistant professor at the Lunar and Planetary Laboratory, make up the UA team of the LUMIO mission study.

The project aims to use an advanced camera to monitor meteorites striking the moon. Combined with existing Earth-based monitoring, these observations could create a more complete picture of what happens when meteorites hit the lunar surface, and of the spatial distribution of these impacts. Understanding where meteorites that hit the moon come from and when they hit helps us understand the debris environment in near-Earth space.

“LUMIO will enable us to answer some key questions about small object population around the Earth-Moon system,” Reddy said. Reddy came up with the science justification for the mission.

SysNova, a European Space Agency initiative that uses technology challenges to attract the best proposals from European companies, universities and research centers, first asked for proposals for its Lunar CubeSats for Exploration competition in late 2016, and about 60 teams answered the call. In spring 2017, four teams were selected as finalists, and received grants of about $100,000 and six months for initial studies. LUMIO was selected as the winner in December 2017.

CubeSats are miniature satellites made up of 10-by-10-by-10-centimeter cubic units called U’s. Originally used in university settings so students could design and run their own missions, CubeSats’ low cost, low weight and increasingly powerful processing capabilities have been receiving more attention from national space agencies in recent years. Roger Walker, a project manager for educational satellite projects at the European Space Agency, compared the standard satellites of today to PCs and CubeSats to smartphones.

“Now, agencies are exploring the feasibility of sending these cubes out not just around earth, but to explore other areas,” Furfaro said.

Kevin Jacquinot, who earned his master’s in aerospace systems at UA in 2017, designed a CubeSat for an independent study course working for Furfaro. After graduation, he did some systems engineering for LUMIO.

“Because of LUMIO, I was put in contact with the European Space Agency, and I’m actually waiting for an answer from them about working on another lunar exploration project,” he said. “I would love to work on a project like this again.”

As director of the Space Situational Awareness Arizona initiative, Furfaro works with other UA faculty to understand and characterize the behavior of objects in space.

One aim of the LUMIO mission is to increase lunar situational awareness, or what might impact the moon. This could be particularly important for the U.S., in light of a directive President Donald Trump signed in December formally instructing NASA to send more astronauts to the moon.

“If we’re going to go back to the moon, like the president announced, we have to also have a better understanding of the moon environment,” Furfaro said.

As winners of the challenge, the LUMIO team will conduct a concurrent engineering study with ESA in the coming months.

“Then, if everything goes well, there’ll be a good chance we’re going to fly it,” Furfaro said.

Mission to the Moon

LUMIO would be about 12U (2Ux2Ux3U) and weigh about 50 pounds (roughly one-hundredth the weight of NASA’s New Frontier spacecraft). In phase one of its mission, it would be transported to the moon on another vehicle, then begin its lunar, or selenocentric, orbit.

In phase two, the transfer phase, LUMIO would travel beyond the moon to L2, a gravitational parking spot that astrodynamicists refer to as a “Lagrange point” (named for an 8th century mathematician), which will allow LUMIO to maintain its relative position to the moon as it orbits the earth.

In phase three, the operative phase, LUMIO would begin orbiting L2 in approximately 29-day rotations -- the same length as the lunar cycle itself.

In the two weeks surrounding the far side’s new moon -- a full moon from Earth’s perspective, the moon will be dark enough for LUMIO to observe and record meteoric impacts. The moon will be too bright to observe during the other two weeks, so scientists will use the time to recalibrate LUMIO’s navigation system and keep it on the right trajectory.

LUMIO would orbit L2 for about a year, followed by disposal, which may involve crashing LUMIO onto the lunar surface. Another spacecraft with the right instrumentation could gain valuable information about the moon’s subsurface by observing the debris and materials stirred up by LUMIO upon impact.