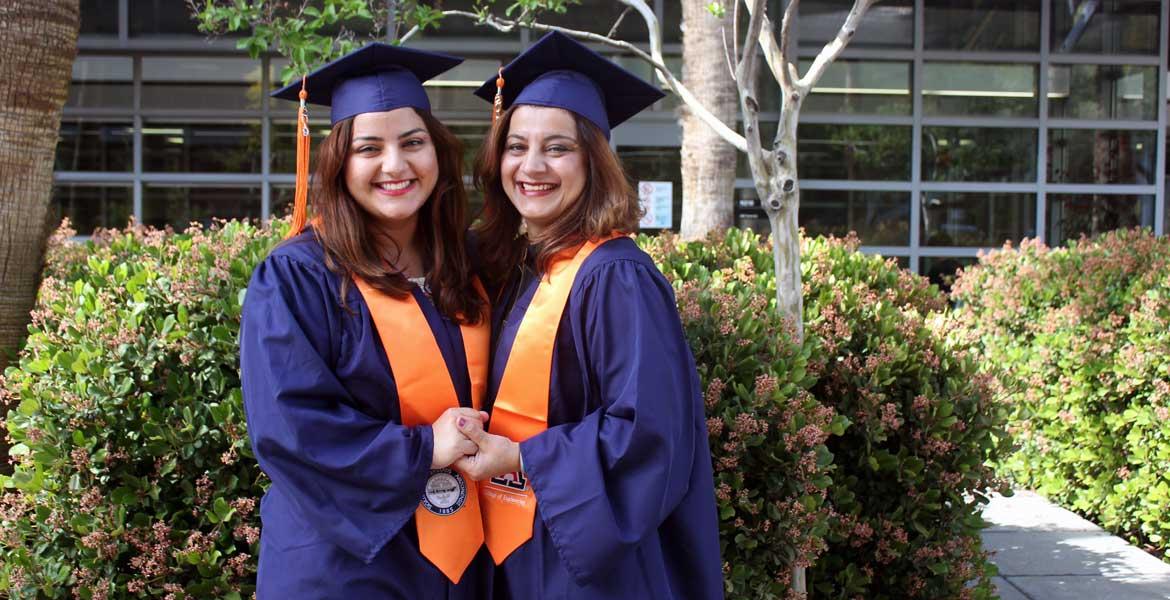 By
Emily Dieckman
Time to read
2 minutes
Print
a- a+
Read so far
For this dynamic duo, education is a lifelong journey. Mom started passing on a love of learning even before she welcomed her baby girl to the world.

Neda Ahmadi was pregnant with her daughter, Ghazal Moghaddami, while studying social sciences 23 years ago at a Payameh Noor University campus in her home country, Iran. Now the two women are both receiving their bachelor’s degrees in engineering at the University of Arizona’s 2019 Commencement ceremony May 10.

“I guess you could say it’s been 23 years of studying together,” said Moghaddami. “Sometimes, we think we’re really going to miss going to school with each other.”

The two started their engineering studies at Wichita State University in Kansas. Ahmadi chose mechanical engineering because she’s good at math and problem-solving. Moghaddami chose biomedical engineering to combine her interest in math with a chance to work with hospital patients. They came to Tucson to join Moghaddami’s father, who works as a nurse practitioner.

Whenever I learn things, I feel like I’m seeing a new aspect of the world, the same way that people who travel to Europe or Australia or Hawaii to see new places might feel.”

“If I get all the knowledge I can at a university, what should I do then?” she wondered. “I thought, ‘If I’m a scientist, I’ll always have something to study, to learn and to discover.’ So I made a promise to myself to spend my life learning in whatever way I can.”

Her family in Iran didn’t think math and engineering were appropriate for a woman, so she first pursued an education degree to help spread knowledge to others. Then when she and her husband moved to the United States to give Moghaddami and her brother, who is also an engineer now, a better life, more opportunities opened up for Ahmadi as well.

Thriving at the UA

Their first semester at the UA, the mother-daughter pair took a computer programming class together. Though their class schedules have since diverged, they still carpool, do their homework at the same time and help each other where they can. They’ve joined forces to work through tricky math problems and project challenges.

“Instead of going shopping together, we go to school together,” Moghaddami said.

The mutual support has paid off. They’ve both succeeded in their degree programs and shone at the UA College of Engineering’s annual Design Day on April 29, 2019. Moghaddami’s team built an instrument that measures the age of bruises to help solve child abuse cases. She was a member of the only all-woman team in Design Day’s 17-year history to win an award -- the Ball Aerospace Go Beyond Award for Pioneering Design. And Ahmadi’s team far surpassed sponsor Honeywell’s expectations with its device to measure the temperature of rotors.

Moghaddami and Ahmadi’s college convocation ceremonies are at the same time, in different places on campus. But they have a plan.

"We’re going to go to mine first, because it’s shorter, and then we’ll all get in a car and drive to my mom’s graduation,” said Moghaddami, who plans to apply to graduate school to become a physician’s assistant. “We’re super excited.”

Ahmadi hopes to get a job at Honeywell or a similar company, and then get even more schooling.

In the meantime, they’re considering a family cruise or vacation abroad this summer to celebrate their accomplishments. They haven’t nailed down their plans yet, but luckily for Ahmadi, education provides an experience that isn’t too far removed from a trip abroad.

“The learning process for me is like walking in a new world,” she said. “Whenever I learn things, I feel like I’m seeing a new aspect of the world, the same way that people who travel to Europe or Australia or Hawaii to see new places might feel.”