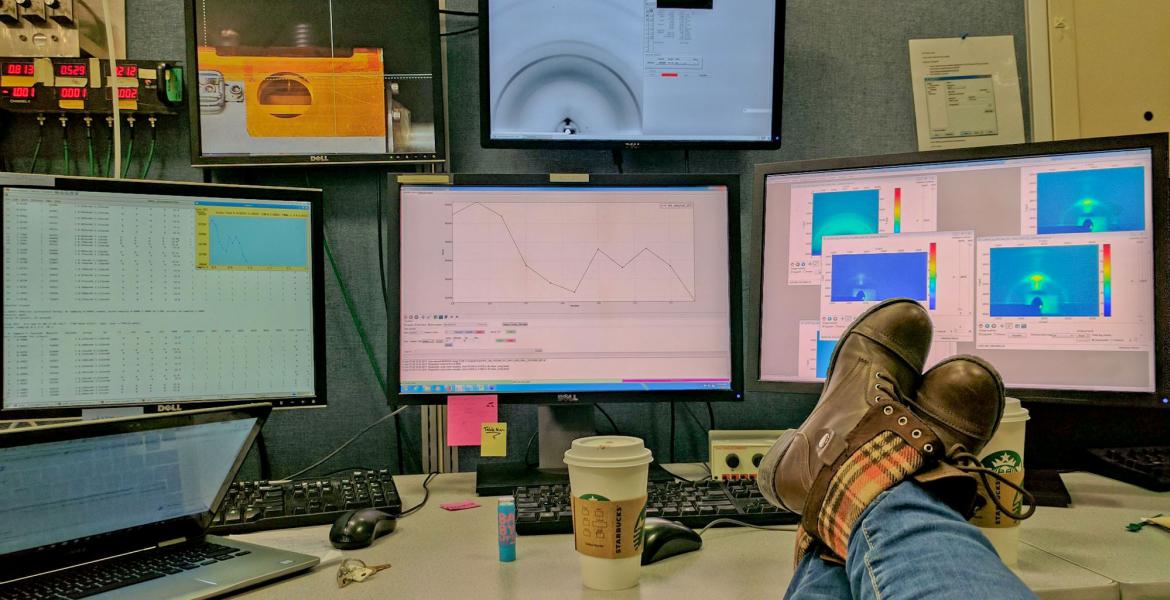 By
Emily Dieckman
Time to read
3 minutes
Print
a- a+
Read so far
PhD candidate Bharati Neelamraju, who is working on organic semiconductors and flexible electronic devices, progresses from physics and optics to materials science and engineering -- and Twitter!

She posted her first tweet at 1:23 a.m. one day in January 2017: a photo of her feet propped up on a desk with five data-filled monitors plus a laptop, two cups of coffee and a few sticky note reminders.

The caption read “When u r up all night running experiments #SciencingLikeAGirl,” and the tweet ended with an emoji rocking a pair of sunglasses.

Bharati Neelamraju, a materials science and engineering PhD student and graduate research assistant in assistant professor Erin Ratcliff’s lab, is one of 12 newly named Carson Scholars at the University of Arizona. At a recent communications retreat for the scholars, she learned Twitter is a good way to stay connected to the scientific community.

The late nights running experiments, however, are nothing new for Neelamraju, who researches organic semiconductors in Ratcliff’s lab. Melanie Rudolph, a former materials science and engineering postdoctoral associate in Ratcliff’s lab, traveled to Stanford University with Neelamraju in 2017 to use the school’s specialized X-ray equipment to test the organic semiconductor materials.

“She would perform X-ray measurements until 2 or 3 a.m. in order to get the data she wanted for her projects,” Rudolph said. “I could tell what kept her going that long was her curiosity and true excitement about the science.”

The Carson Scholars program provides environmental researchers with public communication skills crucial for sharing the value of research with the general public and nonscientists making decisions about funding. In addition to a $5,000 scholarship, the program provides a year of communications training and professional development opportunities. Carson scholars present their research at Borderlands Brewing Co.’s Science Cafe series, write about their research for online environmental magazine terrain.org, and create science communications projects -- exhibits, blogs or videos, for example.

“My first language is not English, so I sometimes have difficulties communicating science,” said Neelamraju, who earned her physics undergraduate degree in India. “You’re not allowed to use certain jargon words that I’m used to using every day. I thought the experience in the Carson Scholars Program would be good for me.”

The UA program has awarded $320,000 to 64 scholars across 20 disciplines since 2012. Support comes from the Institute of the Environment, the Agnese Nelms Haury Program in Environment and Social Justice, Biosphere 2, College of Science Galileo Circle and private donations. Neelamraju is also a 2018 Agnese Nelms Haury Fellow, a title granted to researchers working on projects promoting environmental conservation and social justice.

From Physics to Optics to Engineering

Neelamraju got her undergraduate degree in physics from the University of Hyderabad in India in 2014, then came to Tucson to earn a master’s degree through the UA’s world-renowned optics program, finishing up in 2016.

“I was doing a lot materials science, basically, but using optics as a tool to understand it,” she said. “I think that’s one benefit of being in materials science: It’s a pretty broad field. You’re basically doing physics, chemistry, engineering -- all of it put together. It’s pretty cool.”

These days, Neelamraju is working in Ratcliff’s lab developing organic semiconductor devices, which are more cost-effective, flexible and environmentally friendly than their inorganic counterparts. Flexible electronics could open up a world of possibilities. Think skin patches that do the same work as a FitBit or even measure stress by monitoring biomarker levels in sweat.

“We’re using organic materials to increase the functionality of the current generation of electronics, most of which are silicon-based,” Neelamraju said. “These are not commercially viable right now, but they will be. That part excites me -- we are working on things that will happen and have not exactly been done before.”

After she graduates -- hopefully, she says, by 2020 -- she’d like to work in industry, particularly in solar energy, where organic solar cells are becoming increasingly popular. She’s keeping her options open for now. But armed with a highly specialized knowledge of organic semiconductors and the communications skills to promote them, her future is bright.

“She is a natural born leader: quick on her feet, sensible in her reactions, mature and capable of handling whatever is thrown at her,” said Palash Gangopadhyay, co-adviser for Neelamraju’s master’s thesis, adjunct professor in the College of Optical Sciences and chief technology officer of URBIX Resources. “I expect her to be very successful in leading in the preparation of the next generation of scientists and professionals.”