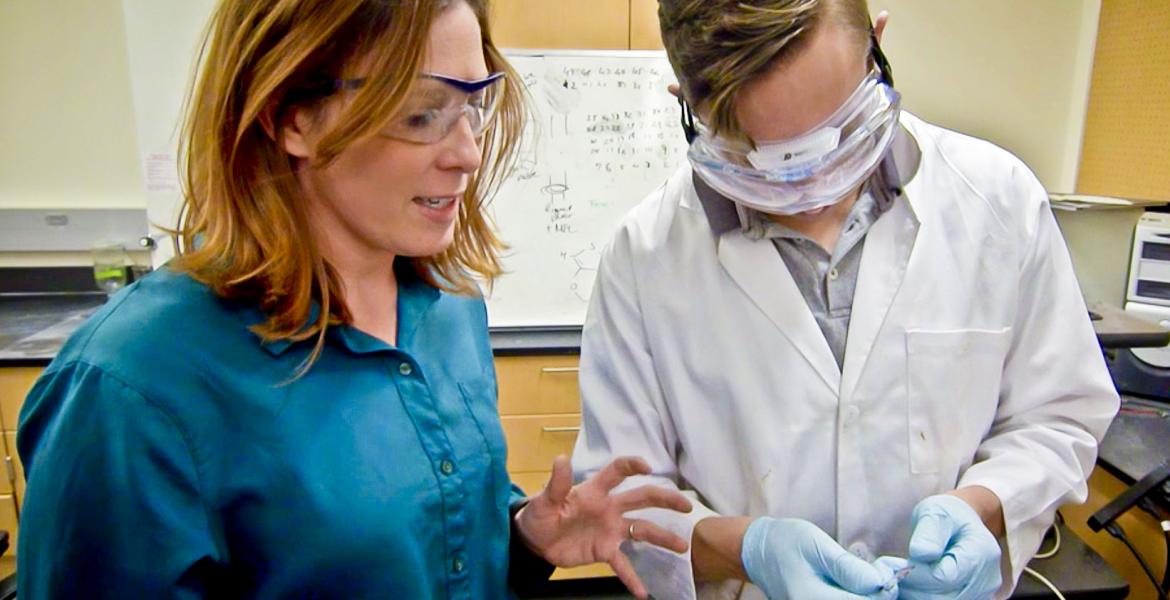 By
Jill Goetz
Time to read
3 minutes
Print
a- a+
Read so far
Erin Ratcliff’s experiments with organic polymers boost prospects for developing more sensitive wearable and implantable bioelectronics that can record, regulate and repair what ails us.

Engineers at the University of Arizona have experimentally verified the electrochemical processes that control charge transfer rate from an organic polymer to a biomarker molecule, using common materials and measurement techniques to make their results widely accessible and reproducible.

Their findings, reported in Nature Communications, will advance the field of organic bioelectronics, particularly in medicine, and have applications to energy storage technologies, such as batteries and fuel cells.

Electron transfer reactions are fundamental processes in biology, chemistry, physics and engineering in which an electron is transferred from one molecule to another molecule or substance. Electron transfer drives everything from photosynthesis and respiration to electronics. Understanding these reactions’ mechanisms and rates makes it possible to control the sensing capability and output signal of electronic devices, such as solar cells and biomedical sensors.

Co-authors Erin Ratcliff, assistant professor in materials science and engineering, and postdoctoral associate Melanie Rudolph have demonstrated new ways to achieve selectivity for biomarkers for designing better biosensors. Selectivity is accomplished by processing a polymer in such a way that it precisely controls the rate of charge transfer between itself and a biomarker molecule.

Most of today’s electronics are made from inorganic semiconductive materials like silicon. They are highly effective, but expensive to produce and have limited compatibility with biological systems.

“Traditional electronic materials are hard and brittle, and therefore prone to failure in flexible wearable structures,” Ratcliff said. “Existing implantable biomedical electronic devices like defibrillators have achieved remarkable success -- but the potential for wearable and implantable organic bioelectronics is breathtaking.”

In the fast-growing field of organic bioelectronics, engineers are using organic, or carbon-based, conductive polymers to produce electronics that are low-cost and lightweight, flexible and wearable, and easy to print.

Such organic bioelectronics might include soft, stretchable and transparent ion pumps for drug delivery; wearable bandages that zero in on one of the hundreds of biomarkers in sweat; or biological neural tissue implants that enable an amputee to manipulate a robotic arm, hand and fingers. The materials operate by charge transfer reactions between the organic conductive polymers and the surrounding environment. These reactions are very different than those between inorganic materials and electrolytes. By better understanding these processes, researchers can manipulate the properties of organic polymers to produce more biocompatible devices that blur the boundaries between human and machine.

In their paper, Ratcliff and Rudolph describe some of the first experiments to test a leading theory of electron transfer in electrochemical systems with organic polymers.

The researchers demonstrated the Marcus-Gerischer model, based on the work of theoretical physicist and Nobel Prize-winner Rudolph Marcus and the late electrochemist Heinz Gerischer. Marcus theory explains the rates of electron transfer reactions from one molecule to another; Gerischer expanded the theory to explain charge transfer reactions between molecules in solution (electrolytes) and solid materials with conductive properties, like metals and semiconductors.

The second, and more exciting, piece for the researchers was their demonstration of Marcus’ theory of inverted charge transfer, which states that as voltage applied to a chemical system increases, electron transfer rate at some point slows dramatically.

“In our experiments, we combined Marcus’ and Gerischer’s formulas and applied them to demonstrate unique, but predictable, electron charge transfer mechanisms at the interface of organic polymers and electrolytes,” Ratcliff said. “We produced almost exactly the same inverted curve we expected based on the Marcus-Gerischer model.”

“I understood inverted charge transfer in theory, but I was really surprised to obtain these results again and again in the lab,” Rudolph said.

A Framework for Future Research

Ratcliff and Rudolph used a model molecule, ferrocenedimethanol -- a standard of electrochemical research -- and the widely studied thin-film polymer material poly-(3-hexylthiophene), or P3HT. They affixed the thin-film polymer to a glass slide and exposed it to an electrolyte solution. By using a form of electrochemical spectroscopy, Ratcliff and Rudolph analyzed electron transfer and ion distribution in microseconds and seconds.

Their findings overall demonstrate that electron transfer at the interface of a conductive organic polymer and electrolyte is directly controlled by the polymer’s electronic structure, a major design guideline for future organic bioelectronics applications.

“We suggest things for materials scientists and engineers to look for so, using the tools of molecular engineering, they can synthesize advanced materials for desired outcomes,” Rudolph said.

“Any time you come up with a fundamental framework for experimentation, it pushes a field forward,” Ratcliff added.

Funding for this research was provided by the Defense and Security Research Institute through the Technology and Research Initiative Fund (TRIF) of Arizona.