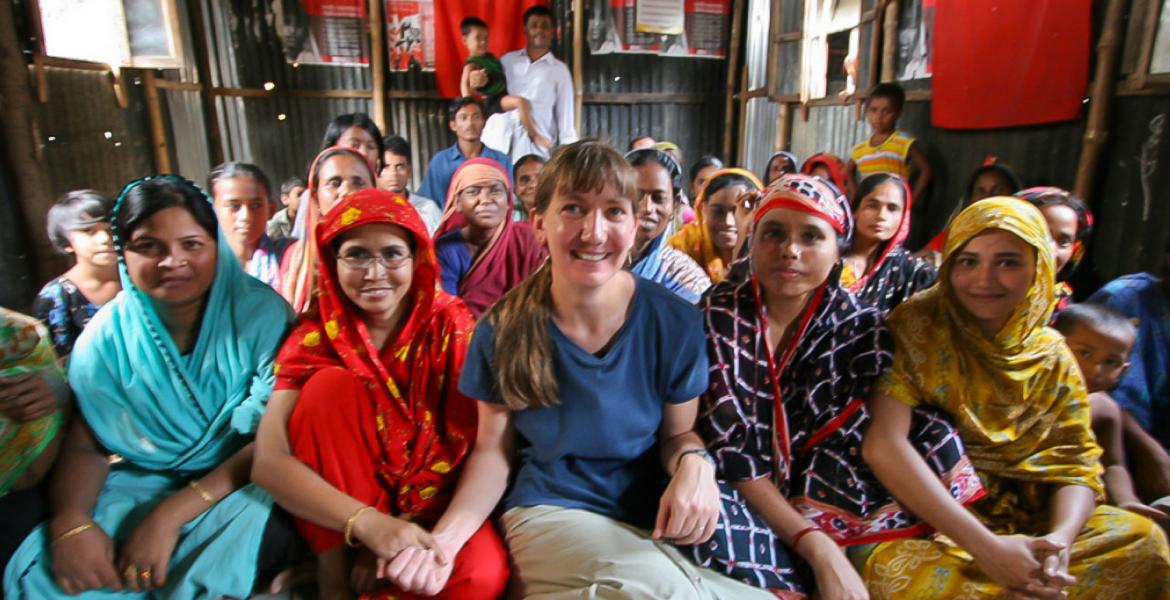 By
Emily Dieckman
Time to read
3 minutes
Print
a- a+
Read so far
Marla Smith-Nilson shares experiences with leading an international nonprofit and combating gender inequality.

When Marla Smith-Nilson was a teenager in Benson, Arizona, she used to go to a lake in Mexico for family vacations. While she spent her days camping, fishing and water skiing, she noticed local girls and women going down to the lake to collect water and carry it back to their homes. The image stuck with her.

Today, Smith-Nilson is the founder and executive director of Water1st International, a nonprofit that supports sustainable water and toilet projects for the world’s poorest communities. The 14-year-old organization has raised $22 million and completed almost 3,000 water projects in five countries, serving about 215,000 people.

“Literally being born two hours north of these girls, I had a completely different life,” Smith-Nilson said. “I saw that when your life has a really different starting point, it has a huge impact on what you can achieve. So, it wasn’t really about the water for me. From the beginning, it was about the equality -- gender equality -- and creating opportunities for other people that were the same as I had.”

The 1991 UA civil engineering alumna returned to her alma mater on Jan. 30 to talk to students, faculty, and alumni about her experiences leading a nonprofit, making her way as a woman in the male-dominated field of engineering and collaborating with groups all over the globe. Her conversation with interim College of Engineering Dean Larry Head was the first in the college’s spring speaker series, Lessons in Engineering Leadership.

Smith-Nilson was on the UA campus often as a child, spending her days in the library while her mother earned her master’s degree. The whole family were also huge UA sports fans.

“When it came time to select a college, I didn’t look anywhere else,” she said. “There were no other options. I wanted to come to the University of Arizona.”

While she flipped through the course catalog, the classes in civil engineering -- particularly in water systems and hydraulics -- caught her eye. A gut reaction that engineering seemed interesting paid off: After earning her UA degree, Smith-Nilson went on to the University of North Carolina at Chapel Hill, where she earned her master’s degree in environmental engineering.

During graduate school, she traveled to South America to study the water use habits of residents of a forest city who purchased water each morning from a centrally located kiosk. She also connected with a group working to provide running water to homes in Lempira, a rural region of Honduras.

“These people all had pipe water to their homes, they had toilets and the community was able to independently operate this system,” she said. “They were doing all these things that just made sense.”

Smith-Nilson started raising money for the organization when she got back to North Carolina, and went on to found a nonprofit that would become the inspiration for Water1st International. To this day, she continues working with that same Honduran organization with the mission of creating locally led sustainable projects that provide running water to resident homes.

Carving Out Her Path

Being a woman in engineering isn’t always easy, Smith-Nilson said. She’s faced everything from rude comments to harassment to being told she’s “passionate” and “full of heart” while her male counterparts are praised for their leadership skills and strong ideas.

Surrounding herself by other strong women has been key, she said. She and the few other women in her undergraduate classes worked hard and got involved in organizations like ASCE, and she keeps in touch with all of them to this day. In her experience, her education has earned her respect in the communities she’s worked in all over the world, including those where gender inequality is even more entrenched.

“I think being an engineer gives you credibility anywhere,” she said. “I think it’s a respected profession, not just in this country, but even more so internationally and in lower-income countries.”

Smith-Nilson said she makes it a point to be honest and vulnerable as a leader, unafraid to admit when she doesn’t have the answers. She also values the input of the people who work with her -- even their criticisms. Having diversity on her staff and in the organizations she works with is also key, she said, because complementary skill sets mean better problem-solving abilities.

“When something is successful, it’s because of all of us,” she said. “I try to deliberately say ‘we’ a lot and include everybody in the successes we have.”

Empowering people -- particularly women -- is one of Water1st International’s most important missions. Because women and children are often tasked with water collection, many don’t have time to pursue education, and this prevents them from being equals in their homes and societies.

“Once they have running water, their lives are totally transformed,” Smith-Nilson said. “They’re healthier. They’re happier. But what I mostly see is women becoming a lot more confident in themselves. I’m seeing women in Honduras, where I’ve worked the longest, being elected as mayors, and some women from the communities we work with are even holding national office.”

Registration is also open for a Wednesday, March 27, talk with Jerry Hunter, BS and MS systems engineering, 1988 and 1990, senior vice president of engineering at Snap Inc.