By
Jill Goetz
Time to read
3 minutes
Print
a- a+
Read so far
University of Arizona civil engineering alumna Marla Smith-Nilson is delivering clean water and expanding opportunities in impoverished countries around the world.

Growing up 45 miles from Tucson, Marla Smith-Nilson always knew she would attend the University of Arizona -- especially after participating in a UA summer science camp at age 12. 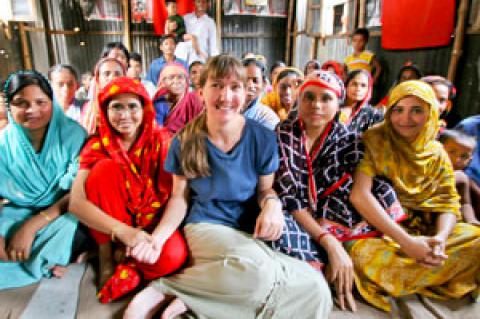 But she never imagined she would study engineering, or start a nonprofit organization that brings clean water to hundreds of thousands of people. She traces it all to something she witnessed later that summer.

“While on vacation with my family in rural Mexico, I saw a girl around my age fill a large container with water from a lake, put it on her back and walk off. It really made an impression on me,” recalled Smith-Nilson in presenting the UA civil engineering and engineering mechanics department’s 2016 Centennial Lecture on Oct. 28.

Some 2.5 billion people have no access to clean water or toilets in their homes and communities, and 5 million -- mostly children under 5 -- die every year from using contaminated water for drinking, cooking and bathing, she said.

To curb illness, save lives and lift the burden of water carriers, Smith-Nilson, who received a UA bachelor’s degree in civil engineering in 1991, founded Water1st International. The Seattle-based nonprofit has made safe water accessible to more than 165,000 people in Bangladesh, India, Ethiopia and Honduras.

“We intentionally work in only four countries, so we can really get to know the communities and our partner agencies,” she said. “By supporting local, on-the-ground organizations with a proven track record of implementing water and sanitation projects, and working with them consistently, we can provide water projects that last.”

In impoverished countries, millions of girls and women, most of whom are illiterate, walk for hours every day carrying empty five-gallon containers to water sources and then walk back home with 40-pound loads on their backs.

Mari Tuji, a young mother in Kelecho Gerbi, Ethiopia, was one of them. She woke up before dawn each morning to nurse her youngest child before setting out with her three children on a four-mile, two-hour trek to reach a small river with cattle and goats wading in it. Again and again, her children became ill from the water, but they had no other options.

“It broke my heart,” said Smith-Nilson, who accompanied Tuji on one such trip.

Water1st, working with a local Ethiopian organization, built a new water system in Kelecho Gerbi four years ago. The system pumps water to a 20,000-gallon reservoir, then pipes it by gravity to eight public taps. The team also constructed pit latrines in most of the community’s houses.

“Mari now has time and energy to participate in the community and take on a leadership role,” Smith-Nilson said. “And, now that they don’t have to carry water, she is determined that her daughters will attend school.”

Smith-Nilson started college without a clue what to major in.

“I was looking through the UA course catalog, when civil engineering caught my eye,” she said. “I saw that civil engineers build things -- like water systems -- and it brought back the memory of the girl in Mexico.”

She credits a Flinn Foundation Scholarship, which enabled her to travel to countries including Egypt, and her adviser, UA chemical and environmental engineering professor Robert Arnold, with steering her in the right direction.

“I’ll never forget seeing a young Egyptian mother carrying a child on her back and a bucket of water on her head, walking barefoot in the sand,” she said. “It was there I realized my passion was safe water.”

Arnold encouraged Smith-Nilson to apply for the master’s program in environmental engineering at his alma mater, the University of North Carolina-Chapel Hill.

“That was the only graduate school I applied to because I trusted and respected him so much,” she said.

Recognition is mounting for Smith-Nilson’s work. She won Self magazine’s Women Doing Good Award in 2013, was featured in an article titled “The Lifesaver,” and appeared on the “Today” show in a segment about women who make a difference. She received the 2007 UA civil engineering and engineering mechanics department’s Outstanding Young Alumni Award and a 2015 World Citizen Award from the World Affairs Council.