By
Pete Brown
Time to read
1 minute
Print
a- a+
Read so far
Tamal Bose is the new head of the UA Department of Electrical and Computer Engineering.

Bose will join the UA College of Engineering July 15 from Virginia Tech, where he is a professor in the Bradley Department of Electrical and Computer Engineering. 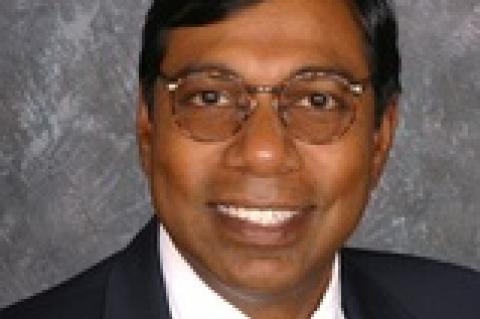 At Virginia Tech, he was director of the National Science Foundation's Wireless Internet Center for Advanced Technology, and associate director of Wireless@VT, a university wide wireless research group.

"I am honored and excited to become the next department head of electrical and computer engineering," Bose said. "The ECE department at the University of Arizona is top notch with eminent faculty and bright students."

UA College of Engineering Dean Jeff Goldberg described Bose as an accomplished educator and researcher. "We are thrilled to have Dr. Tamal Bose join our faculty as department head of electrical and computer engineering," Goldberg said. "His area of research -- wireless communications -- dovetails with existing strengths in the college and will be valuable in key areas of defense and biomedical systems."

Bose got his doctorate in 1988 and his master's in 1984, both in electrical engineering and both from Southern Illinois University. He got his bachelor's degree in 1982 from Jadavpur University in Calcutta, now Kolkata, India. Following a faculty position at the University of Colorado, he joined Utah State University in 2000 as a professor of electrical and computer engineering, and was head of Utah State's ECE department from 2003 to 2007.

Bose said he is looking forward to working closely with the ECE faculty and staff and the college administration to deliver the highest quality of education to prepare the next generation of electrical and computer engineers for careers in industry, government and academia. "I would also like to lead the department to greater heights in research productivity, national visibility and technology transfer," he said.

He wrote the 2004 textbook, Digital Signal and Image Processing, and co-authored Basic Simulation Models of Phase Tracking Devices Using MATLAB, published in 2010. He is the author or co-author of more than 150 technical papers.

Bose, who plays piano and is a member of Tau Beta Pi, said he is looking forward to enjoying Tucson's natural beauty. "I am an avid skier and hiker," Bose said. "I love the West and the mountains." He and his wife, Tammy, have two children, Cameron, 13, and Megana, 9.

Bose was associate editor for the IEEE Transactions on Signal Processing from 1992 to 1996. He is currently on the editorial board of the IEICE Transactions on Fundamentals of Electronics, Communications and Computer Sciences (Japan), and Research Letters in Signal Processing. He is an IEEE Engineering Accreditation Commission program evaluator and a member of the digital signal processing technical committee for the IEEE Circuits and Systems society.