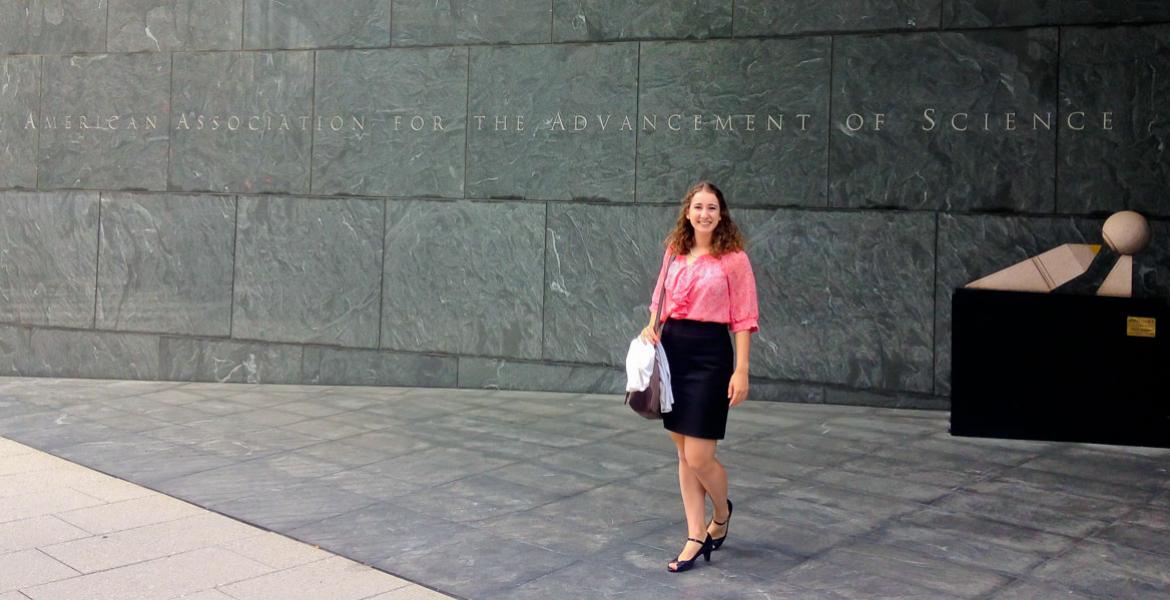 Leah Kaplan stands outside the American Association for the Advancement of Science building in Washington, D.C., during the science diplomacy and leadership conference she attended in 2017.

Leah Kaplan’s mom likes to tell the story of the biggest temper tantrum Kaplan ever threw.

“I had spent all day setting up this elaborate Lego town. I was probably about five years old, and I finished it -- my greatest masterpiece ever,” Kaplan said. “My mom thought I was done with it, so she cleaned it up, and when I came back, I just flipped.”

The little girl with a love of building has just been awarded the University’s 2018 Merrill P. Freeman Medal -- given annually to two UA seniors for outstanding moral force of character. It is one of four senior honors awarded at the University level. The college senior has also moved on from building Lego structures: Now, she's building a career in the world of science diplomacy.

Kaplan is part of the Flinn Scholars program, which funds the cost of in-state tuition and at least two study-abroad experiences for only 20 outstanding Arizona high school students each year. By the time she graduated from Chaparral High School in Scottsdale, she had already completed two engineering internships at Arizona State University. Armin Sorooshian, associate professor in the Department of Chemical and Environmental Engineering, is her mentor for the Flinn Scholars program.

“Leah has consistently stood out as both a student and a person since the day I met her,” he said. “I feel very lucky that she reached out to me in her first semester to be her mentor, especially because of our mutual passion for science diplomacy.”

Leah is a chemical engineering major with a minor in communications. She serves as treasurer of the Arizona Model United Nations and president of the UA branch of Tau Beta Pi, the National Engineering Honor Society. She has also been involved with the Society of Women Engineers and the Honors College Ambassadors program.

A Summer in Guatemala

The summer between her sophomore and junior years, Kaplan studied abroad in Guatemala through the UA’s IDEAS Program, hoping to experience something new and build on her high school Spanish skills. The first few weeks of not knowing the language, and living with a host family who didn’t know any English, were tough -- especially because she was volunteering to teach English to children. But eventually she found her groove with the language, and even took up salsa dancing.

A turning point in her studies came during her colloquium class about Guatemala’s history and culture.

This is an avenue where I can be the voice of science and technology, and bring in the voice of developing nations to make sure we’re helping everyone, not just a select group of people.”

Kaplan spent her summer reflecting on what it meant to be an engineer: They’re often praised as being people who help the world, but what if that meant helping the first world at the expense of the third world?

When she returned to the UA campus for her junior year and heard about the College of Engineering’s Science Diplomacy Conference, she said it was like lightning had struck. It was the first time she realized science diplomacy was a possible career field, and the fact the conference was taking place in Tucson seemed like fate.

“I felt it was almost tailor made for me,” she said. “This is an avenue where I can be the voice of science and technology, and bring in the voice of developing nations to make sure we’re helping everyone, not just a select group of people.”

Kaplan dived headfirst into science diplomacy, acting as a conference rapporteur at the UA conference. In fall 2017, she attended the 2017 American Association for the Advancement of Science’s Science Diplomacy and Leadership Conference in Washington, D.C. Out of the 90 international applicants to the conference and the 32 selected to attend, Kaplan was the only undergraduate.

Kaplan has also completed a supply chain operations internship at PepsiCo’s Gatorade facility in Tolleson, Arizona, and worked as a research assistant in two campus labs. Currently, she works in Kim Ogden’s Algae Biofuel Research Laboratory, after working in the Oland/Tolbert Neuroscience Laboratory for two years. Leslie Tolbert called Kaplan “an absolutely stellar student, with broad interests and an even broader intellect,” and said they were lucky to have had her in the lab.

“Leah undoubtedly will be a driving force for good in our world, having the tenacity, compassion, smartness, well-tuned sense of humor and general joie de vivre needed to do so,” added Lynne Oland.

Kaplan maintains a 4.0 GPA, was a resident assistant her sophomore year and, when she finds the time, enjoys hobbies like hiking and performing slam poetry. How does she do it? She cites her time management skills, keeping “a million planners,” frequenting her professors’ office hours, and surrounding herself with supportive friends. Weekends spent doing homework in the library aren’t so bad when they’re spent with friends, or when someone brings donuts, she said.

“With engineering, and with a number of programs, I was worried about there being a kind of hyper-competitive atmosphere,” said Kaplan, who is planning to attend a former lab mate’s wedding later this year. “That’s completely the opposite of the experience I have had. There’s so much camaraderie, and everyone’s trying to help each other learn and grow and master this material. We all want to see each other get to that finish line. I think I’m really lucky to have that at UA.”

After graduation, Kaplan plans to work in Washington, D.C., for a year, interning for an organization like AAAS or a science policy committee. Then she intends to pursue a PhD in either chemical or environmental engineering.