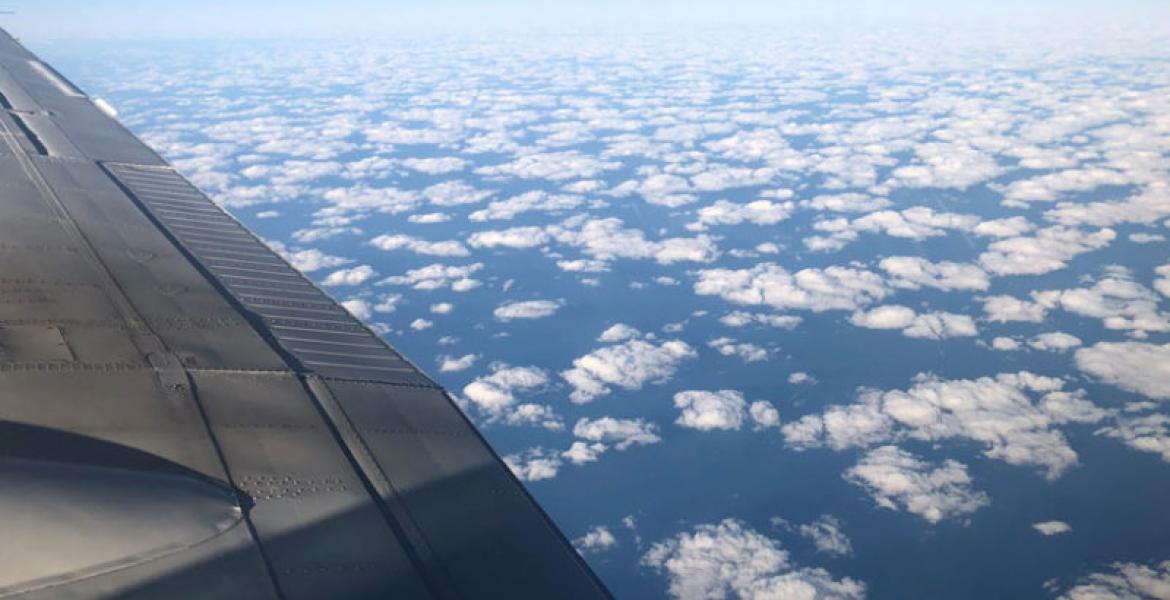 By
Armin Sorooshian, Joseph Atkinson, Richard Ferrare, Johnathan Hair, and Luke Ziemba
Time to read
2 minutes
Print
a- a+
Read so far
A new mission involving synchronized aircraft observations is collecting data vital for improving our understanding of how aerosol particles and clouds influence each other.

For centuries, the mysteries of clouds have intrigued philosophers such as René Descartes, who expressed the overwhelming challenge of explaining their nature. Clouds come in many shapes and sizes, governed by both the meteorological conditions of where they form and the properties of aerosol particles that seed them. The climate implications of diverse clouds, from wispy high-altitude cirrus to puffy marine cumulus, can vary widely depending on their location, altitude, and surrounding atmospheric environment.

Perhaps the clearest demonstration of interactions between clouds and aerosol particles dates to the 1960s, when NASA launched the Television Infrared Observation Satellite (TIROS) to determine whether satellites could be used to study Earth. TIROS imagery revealed bright lines in the sky that we now refer to as ship tracks. These bright lines are clouds that form from various particles emitted by ships that can act as cloud condensation nuclei (CCN). Water vapor in the atmosphere condenses around these CCN, which are also produced by many different natural and anthropogenic sources, forming large numbers of small cloud droplets [Twomey, 1974].

That ship tracks are complex phenomena is well documented. For example, even though there are ships at sea all the time, these bright cloud lines are not always observed. (In a similar manner, contrails do not always appear behind jet aircraft when they are aloft.) So although ship tracks provide a striking illustration of aerosol-cloud interactions, the detailed interplay of anthropogenic aerosols, natural continental and marine emissions, clouds, and meteorology that determines their behaviors and traits—and, indeed, the behaviors and traits of most clouds—is more subtle and not well understood.

This lack of understanding of clouds and their interactions with aerosols represents the largest source of uncertainty in climate models, creating an urgency to study them more thoroughly. Now a major NASA airborne science campaign has set out to illuminate elusive details about these atmospheric enigmas to better inform projections of human-caused climate change.

Improving model simulations of clouds requires a deeper understanding of how they form and evolve. To guide this understanding, researchers have developed airborne sampling strategies that target air in and around clouds during brief, intensive field campaigns. However, this episodic approach produces only small numbers of discrete samples and limited coverage of the variety of cloud behaviors.

For instance, field studies usually last only a few consecutive weeks in a small geographic region, which reduces the range of aerosol and cloud types that can be studied. And single aircraft missions cannot simultaneously capture all of the information relevant to aerosol-cloud interactions throughout the column of the lower atmosphere, especially because clouds evolve on timescales of only minutes and because atmospheric particles and meteorological conditions can vary from one side of a cloud to another.

Thus, data from such intensive, short-duration campaigns are typically insufficient for disentangling influences of meteorology (e.g., wind and humidity) and aerosols on cloud behavior, as well as for understanding how clouds, in turn, affect particles. These limitations hamper efforts to improve how aerosol-cloud interactions are represented in global models.

The NASA Aerosol Cloud Meteorology Interactions over the Western Atlantic Experiment (ACTIVATE) was born of the recognition of these past challenges and from the need for sustained long-term aircraft measurements to tackle specific Earth science questions [Sorooshian et al., 2019].

The NASA LaRC HU-25 Falcon collects measurements of gases, aerosols, clouds, and meteorological conditions (e.g., temperature, humidity, winds) in the lowest layer of the atmosphere (called the boundary layer) below about 2 kilometers in altitude, to which surface aerosol emissions are mostly confined. When the plane is in a cloud, specialized instrumentation enables collection and chemical characterization of cloud water and the elusive CCN particles.