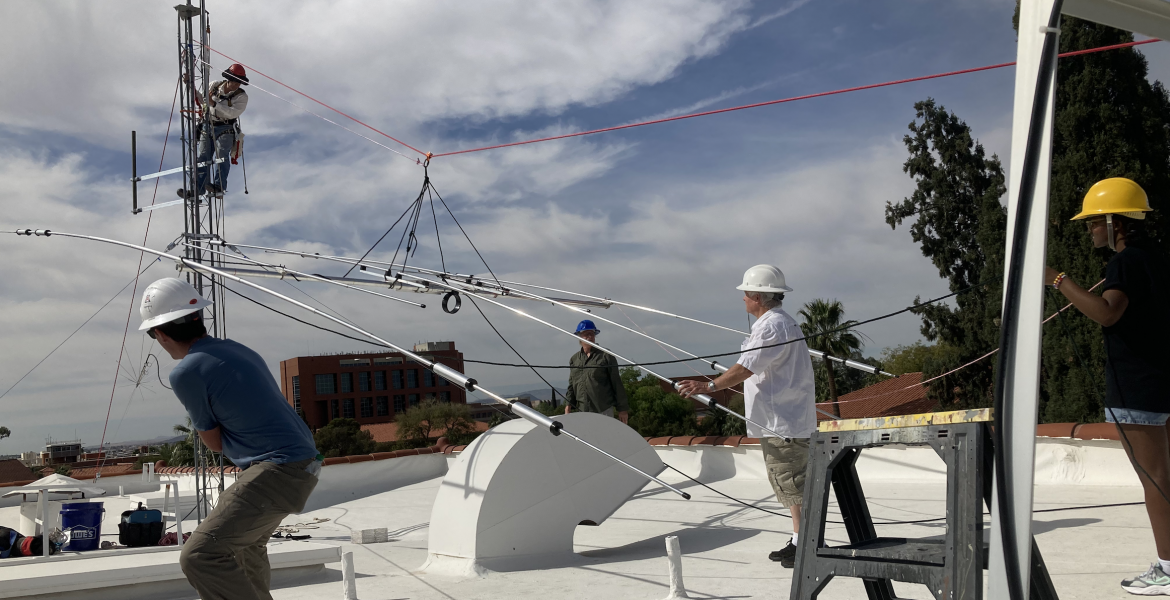 Home / Stories / Students HAM it up on Roof of Old Engineering

Students HAM it up on Roof of Old Engineering

By
Emily Dieckman
Time to read
2 minutes
Print
a- a+
Read so far
Members of the local university-community amateur radio club install a new antenna on the roof of Old Engineering, greatly expanding the club’s communications capabilities.

In the age of the internet, almost anyone can talk to people from all over the world. But most of us use technologies like cellphones and WiFi without much understanding of how they work. Members of the K7UAZ Amateur Radio Club meet several times a month to learn all about the ins and outs of wireless communication and to connect with like-minded people across the world.

“What I like about the nature of amateur radio is taking ownership and understanding how wireless communication works day to day,” said Sarah Li, a molecular and cellular biology major who is in the process of changing her major to systems engineering. “It’s easy to just take advantage of it, like, ‘Oh, of course I can just call someone,' or 'Of course I can use the map app on my phone.’ But this is about building an understanding of the world around you and how it works.”

Another highlight for Li, and for other club members, is the chance to connect with such a tight-knit global community. Because amateur radio enthusiasts share an interest in the communication medium itself, they know they’ll have something in common with every person they connect with. One of the events Li enjoyed most was participating in the North American QSO Party/Collegiate Championship, in which teams used a digital communication mode called radioteletype, or RTTY, to make as many contacts as possible in a 12-hour period.

For the past few years, the group has been upgrading radios and transmission lines for the antennas they use to communicate, including replacing safety wires securing the antenna tower. But they took a major step forward in March, when they raised a 15-foot by 30-foot, 60-lb antenna onto the roof of the Old Engineering building.

“We had antennas up there that were probably 20 or 25 years old,” said Curt Laumann, a research engineer and technology programs advocate in the Department of Electrical and Computer Engineering who manages the club. “It was a nice mix of teamwork: We had ropes, we had pulleys, we wore gloves, we wore hard hats.”

The old antennas could communicate only at 14 and 21megahertz, while the new one can communicate anywhere between 14 and 50 MHz. Club vice president Hilliard Paige, a systems engineering major with a minor in aerospace engineering, explained that this will open up new communications opportunities for the club. For example, they now have the ability to bounce signals off the trails of meteors.

“We wanted an amazing new antenna so the next 20 years of students who come into the club can really spread their wings a lot and experiment and talk with people around the world,” he said, adding that the opportunity for constant learning is a key part of the club’s mission. “We’re really different in that our main goal is to educate and to teach people about radios, and to also help the community.”

Li said one reason she joined the club was to gain knowledge about a technical topic. The learning-first mission of K7UAZ made it a perfect choice for her and for others interested in learning more about wireless communications. Anyone can join and learn about how to make voice, digital or Morse code contacts with radio enthusiasts all over the world. Paige said one of the most interesting experiences he’s had with the club is using radios to look for a lost satellite.

“This is one of the only clubs you can join where we can just take you in if you have no knowledge and teach you what you’re passionate about,” Paige said. “Also, it’s a fantastic way to network. I’ve received two internship offers and even a job offer one year out for after I graduate.”