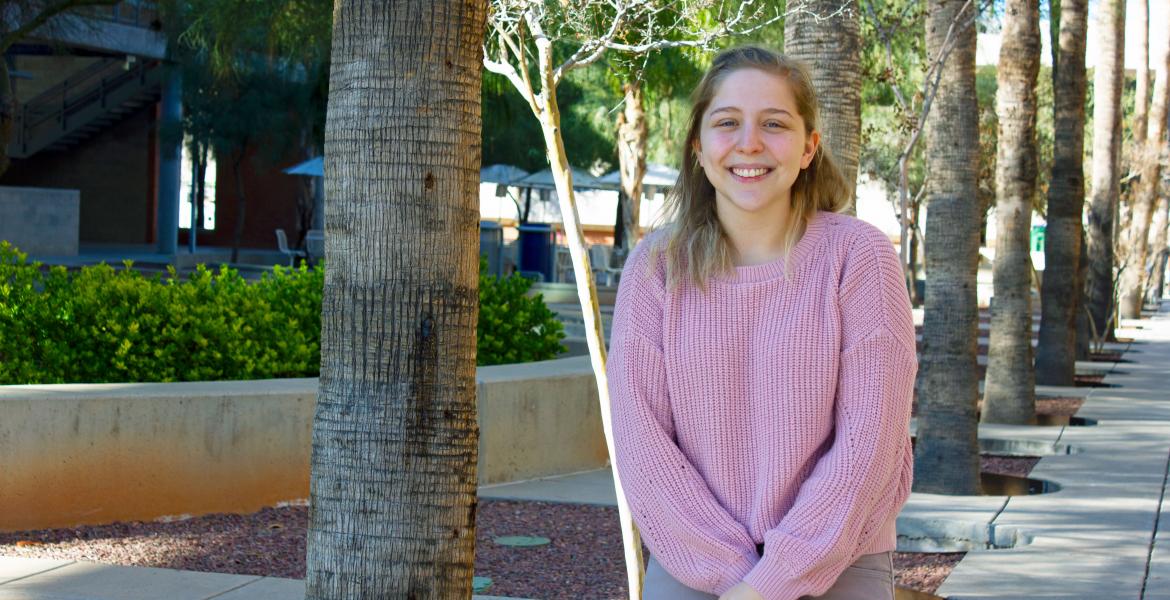 As a Brooke Owens Fellow, Lindsey Koelbel will complete a summer internship with HawkEye 360, a radio frequency data analytics company that operates a first-of-its-kind constellation of commercial satellites.

By
Emily Dieckman
Time to read
2 minutes
Print
a- a+
Read so far
University of Arizona junior Lindsey Koelbel will intern at HawkEye 360 for the summer as part of a program for women and gender-minority students in aerospace.

Lindsey Koelbel has known she wanted to be an aerospace engineer since she was in eighth grade, but she has a wealth of other interests, too: She bakes, she paints, and she plays video games and the flute. So as a first-year University of Arizona student, she jumped at the chance to be in a focus group for a solar system exploration board game.

The game’s inventor was Dante Lauretta, professor of planetary science and cosmochemistry in the Lunar and Planetary Laboratory and principal investigator of NASA’s OSIRIS-REx mission. One thing led to another, and before long, the aerospace engineering major was working as an undergraduate employee for Lauretta on the space mission.

Her latest achievement is being named a Brooke Owens Fellow, an honor which provides top internship and mentorship opportunities for students counted among genders historically underrepresented in the aerospace industry.

“The class of 2020 promises to be our strongest yet,” said Lori Garver, former NASA deputy administrator, CEO of Earthrise Alliance and one of the founders of the Brooke Owens Fellowship. “These fellows have unquestionably earned some of the choicest jobs available for young professionals, and we are thrilled to help them start what are sure to be successful and fulfilling careers.”

More than 550 students from across 15 countries applied for 40 positions. Many were from universities such as the Massachusetts Institute of Technology, Stanford and Princeton. This is Koelbel’s second time applying for the fellowship, after making it to the final round the first time she applied. This time she submitted a video detailing ways she’d grown in the last year.

Koelbel explained how, at an internship last summer at the NASA Goddard Space Flight Center, she not only built her programming for machine learning skills, but gained a new sense of independence. After attending the Women in Space Conference, she felt inspired by all of the options her future held. She even talked about how getting her first-ever B in one of her engineering classes made her consider changing majors, but how her passion for space exploration made her stick with it.

A Role Model for Younger Generations

Koelbel was among 70 finalists who were each matched with one or more companies. Among organizations that partner with the Brooke Owens Fellowship are Boeing, Northrop Grumman, SpaceX, and the National Air and Space Museum.

She found herself juggling seven interviews with four companies during finals week in fall 2019. Just after her last final, she got the call from her top pick: HawkEye 360, a radio frequency data analytics company based in Virginia that operates a first-of-its-kind constellation of commercial satellites. She’ll intern there this summer.

“The work they do is mostly humanitarian in nature, like providing emergency support to search and rescue teams, or for first responders providing aid in natural disasters,” she said. “I like the idea of using what I’ve learned to better the planet.”

At the University of Arizona, Koelbel’s work with Lauretta includes data analysis and visualization support for the OSIRIS-REx mission. The spacecraft is scheduled to bring home pieces of the carbon-rich asteroid Bennu in 2023. On a related project, she is helping develop a machine learning system for spacecraft to navigate asteroid surfaces. She creates 3D virtual realities out of 2D images of asteroid features, such as boulders and craters, so the system can practice navigating.

“Lindsey is in the top 1% of undergraduate students I have worked with during my 19 years at the University of Arizona,” Lauretta said. “She is a role model for young women across campus and around the country.”

On a recent trip to New Jersey to visit family over the winter break, Koelbel had a chance to act as a role model when she spoke to her cousin’s sixth-grade glass about her career in space.

“It was exciting to feel like I had done something that little kids would look up to and be inspired by,” she said.