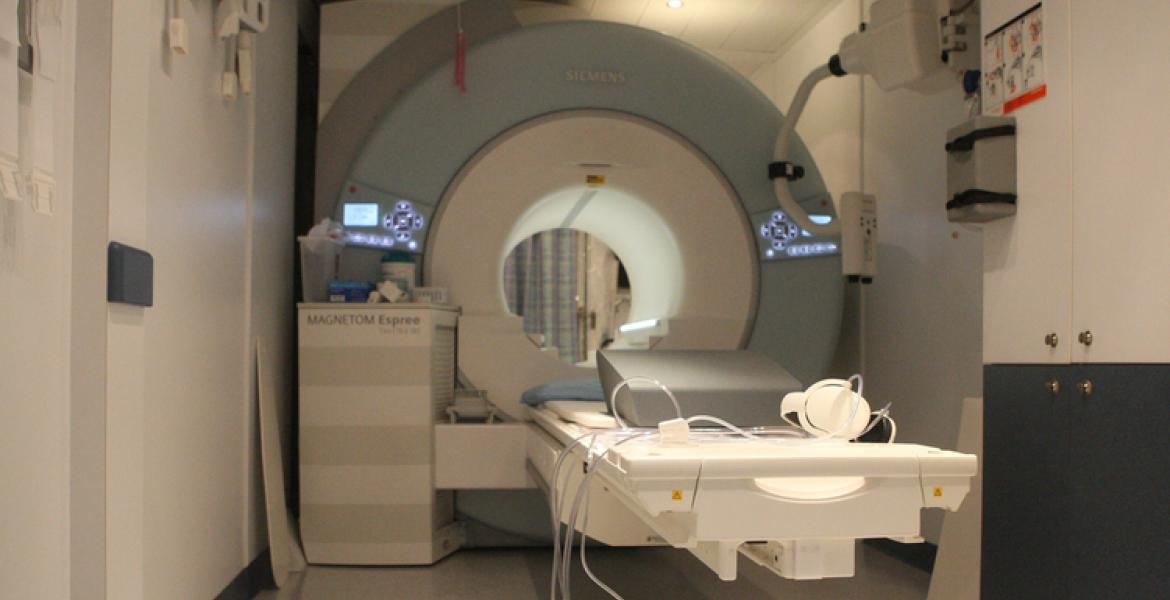 Traditional MRI machines require patients to stay still for extended periods of time, which can be difficult for some people, such as individuals with Parkinson's disease, stroke patients and children. UA researchers are hoping to decrease scan times to 15 minutes or less while also producing better results.

By
Emily Dieckman
Time to read
4 minutes
Print
a- a+
Read so far
UA engineers are using a $2.1 million grant to improve scanning technologies for challenging patient populations.

Lying perfectly still for an hour in a magnetic resonance imaging, or MRI, machine isn’t anyone’s idea of fun. But for some patient populations, such as those suffering from the tremors that come with Parkinson’s disease, it’s practically impossible.

Using a $2.1 million grant from the National Institute of Neurological Disorders and Stroke, a team of University of Arizona researchers from the College of Engineering are creating faster MRI technologies to accommodate challenging patient populations, including individuals with Parkinson’s disease, stroke patients and children. Scan times will be reduced from about 40 minutes or an hour to around 15 minutes -- or even shorter if a patient’s condition necessitates it.

In addition, scans will provide higher-resolution images with richer information, giving health care practitioners more information about the stage of a disease, and even allowing for earlier diagnosis of conditions like Parkinson’s.

The pre-motor stages of Parkinson’s, which can include rapid eye movement sleep behavior disorder and hyposmia, or a reduced sense of smell, often begin setting in 10 to 15 years before the disease is diagnosed. By the time of diagnosis, 60 to 70 percent of dopamine-releasing neurons are already damaged -- dopamine deficiency is the cause of most Parkinson’s symptoms -- and treatment options are limited.

“We want to address the boundaries of existing MRI protocol,” said principal investigator and associate professor in the Department of Biomedical Engineering, or BME, Nan-kuei Chen, who is also a member of the BIO5 Institute. “With this research, MRI scans will be faster and higher quality and will produce richer information, so we can be better informed on the stage of disease or will even be able to see if there’s any brain signal abnormality before the disease is diagnosed. With earlier detection, we might be able to delay the disease’s progress.”

The technique is building upon the multiplexed sensitivity encoded, or MUSE, MRI and diffusion tensor imaging technology developed by Chen himself. MUSE improved upon traditional scan methods, which had voxels, or 3D pixels, that were too large to allow researchers to see certain subregions of the brain.

Enhanced MUSE advances the imaging modality in two key areas. First, it reduces motion artifact -- or inconsistencies created in an image when the subject of a scan moves.

“Even if you have a high-quality camera, a lot of patients cannot stay still,” Chen said. “The cameras in the Enhanced MUSE system will trace the person’s movement pattern so the image produced will still have good quality.”

Enhanced MUSE will also be able to incorporate multiple types of MRI data, such as information on iron levels, grey matter volume and white matter connectivity.

“The goal is to integrate them in a coherent way so that in 15 minutes, rather than an hour, we can produce high-resolution, motion artifact-free and multicontrast data,” Chen said.

Obtaining such high-resolution images can come with a cost. In order to gather enough data, the MRI machine must take long-exposure images, the equivalent of taking a photograph using a low shutter speed to let in as much light as possible. However, as many photographers know, a long exposure can mean introducing noise, or a grainy quality, into an image. To address this, Enhanced MUSE includes a “denoising” process, which researchers have already found can reduce noise-related errors by up to 90 percent.

Another trade-off for these high-resolution images is that they come out geometrically warped due to the asymmetric scanning pattern used by the equipment. This is problematic because doctors often advise treatments -- including surgery, intervention and deep brain stimulus -- based on these scans, so precision is key.

The result of all of this? A high-resolution image that’s free from motion-related blur, geometric distortion and noise, all thanks to Enhanced MUSE and the researchers behind it.

"By refining existing technologies to better inform the diagnosis of people suffering from neurologic disorders, Dr. Chen and his colleagues are a great example of the potential that lies at the nexus of technology and biology," said UA President Robert C. Robbins. "To improve the quality of an MRI, while also cutting the time it takes to do the imaging, would be a major step forward for physicians and patients. The second aspect of this research, which will see whether this enhanced technique can help with earlier diagnosis, could mean earlier intervention for the people who suffer from these conditions. I look forward to following their progress, and seeing the contributions they will make in the field of biomedical engineering."

A Timeline for Progress

In phase one of this five-year project, researchers will test their new methods on healthy patient populations, and then verify the accuracy of their results using a method called transcranial magnetic stimulation, or TMS. They will then evaluate and compare data from patients at high risk for Parkinson’s and in early and late stages of the disease.

“The techniques that are being developed in this grant will have application to many other neurologic disorders, from Alzheimer’s disease to cerebral palsy, and will help in their diagnosis, treatment and treatment evaluation,” Trouard said. “Having more accurate and faster MRI techniques will push many fields forward.”