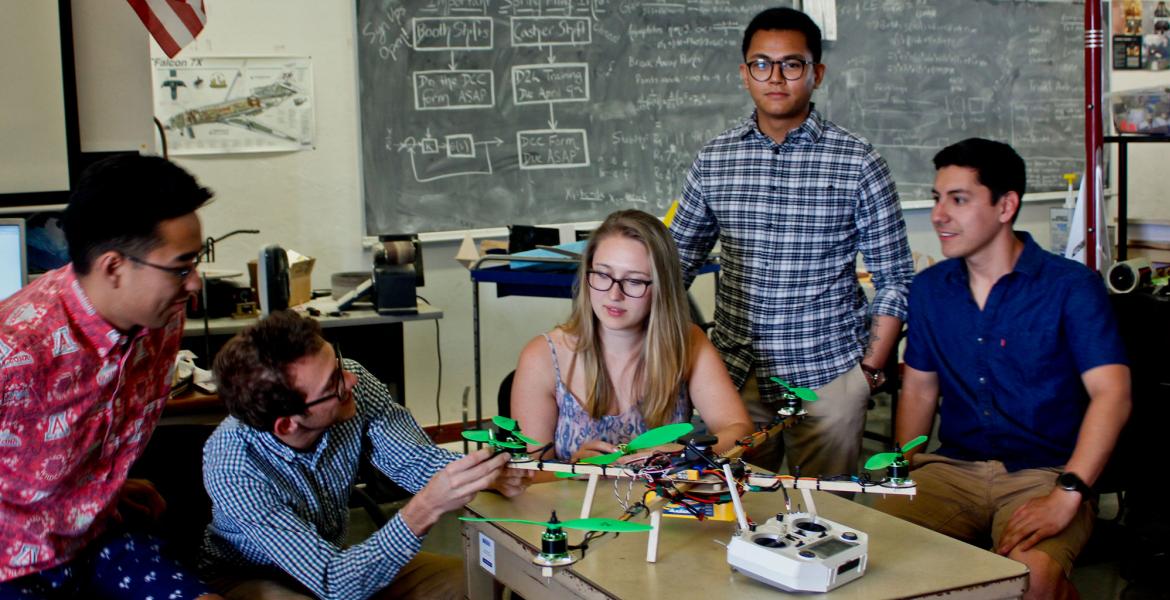 Members of the Terrestrial Exploration project work on their aerial photography vehicle, which blends the vertical takeoff capabilities of a drone with the smooth sailing and endurance of a plane.
Home / Stories / Rescue Drones, Rocket Science and Aerial Photography: A Special Preview of Engineering Design Day 2018

By
Emily Dieckman
Time to read
3 minutes
Print
a- a+
Read so far
On April 30, nearly 600 senior engineering students will display a search and rescue drone, a device to protect people from the aftereffects of snakebites and more than 100 other projects with the potential to save lives, time and money.

This year’s senior teams have designed projects to help mining companies dig deep into the earth and to allow astronauts to breathe on missions far from it. There are apps to help you keep everything from your stress levels to your electricity bill under control and biomedical devices taking steps toward treating lung disease, macular degeneration and even cancer.

“Engineering Design Day is the best day of the semester,” said Larry Head, acting dean of the College of Engineering. “It’s great to showcase our students’ enthusiasm, creativity and teamwork to our industry partners, the public and university and community leaders.”

More than 60 companies and university affiliates -- including Caterpillar, Raytheon Missile Systems, Tucson Electric Power, Honeywell Aerospace, Ventana Medical Systems, Microsoft and General Dynamics -- have partnered with teams on projects that turn designs into prototypes and prototypes into a brighter future.

UAVs to the Rescue

After a major fire or earthquake, rescue professionals or firefighters have to enter hazardous areas if anybody needs help. In 2016, more than 60,000 firefighter injuries were reported in the United States. One senior design team is out to reduce that number by improving the efficiency of search and rescue missions with drone technology.

Their project, sponsored by BAE Systems, involves a drone that will fly over a disaster area and send live video to a laptop workstation monitored by search and rescue workers. Not only does this keep rescue workers from going into dangerous situations blind, but it sets them up with a plan.

“You can see the damage to structures and see if people need help,” said team lead Anthony Masucci. “Then, a report is automatically generated with what you need to do next.”

The team built two drones for their project, complete with software that allows users to input automated missions and hardware that captures video and shares it with a remote computer. With two drones, rescuers can scope out two areas at the same time, or two views of the same area.

A Drone with a View

What do you get when you cross the vertical takeoff capabilities of a drone with the smooth sailing and endurance of a plane? The team of students behind the Terrestrial Exploration project, sponsored by Jekan Thangavelauthum of the Department of Aerospace and Mechanical Engineering, hopes to create the ideal unmanned aerial vehicle for nature photography.

“It will transfer from a vertical takeoff and landing aircraft to a horizontal aircraft,” said team lead Marcos De Rose. “Cruising, it’s like a fixed-wing aircraft. At destination, it will act more like a quadcopter, taking images and first-person view footage.”

The drone has the traditional four-rotor design, but it also has an airfoil across one of the arms, which acts like a wing and enhances the aerodynamics of the device. The drone also boasts a 30-minute flight time and soft propellers designed to keep sound levels down. The team plans for their final model to fly autonomously.

“The idea is to push what we have, and maybe make something that sparks inspirations for future unmanned aerial vehicles as a whole,” De Rose said. “Our sponsor really wanted us to focus on something that hadn’t been done before.”

An Improved Sense of Swell

A team sponsored by Marvin J. Slepian of the UA Department of Biomedical Engineering has created a wearable device designed to monitor limb swelling.

Swelling can be a dangerous sign, especially after a snakebite or as a result of edema, or excess fluid trapped in body tissues.

The device looks a bit like a bionic arm -- it wraps around an arm or leg like a sleeve and monitors changes in temperature, tension and circumference of a swollen area. It connects to a smartphone app via Bluetooth, which allows doctors to monitor the progression of swelling -- including the spread of swelling along an appendage, a common occurrence after a snake bite -- without personal 24-hour surveillance. This information can help them make important decisions about treatment.

“It’s really hard for physicians to see swelling,” said David Johnson, a double major in biomedical engineering and physiology. “And not only is antivenom very expensive, but too much can cause an adverse reaction. There isn’t anything that really does this clinically, where you can measure this ambiently and leave a patient alone.”

A lot of work goes into keeping the fuel in space vehicles cool once they launch. But on the launchpad, fuel can heat up when it’s in a conductive vehicle beneath the hot sun.

“We were tasked with creating a device to cool the propellant, or the fuel to the rocket, and keep it at a steady temperature over the time that it sits on the launch pad,” said Yulian Chulovskiy, a chemical and systems engineering major.

Sponsor company Vector Launch is a Tucson, Arizona, aerospace startup with a focus on keeping flight costs down by constructing smaller vehicles, allowing for more frequent launches. While cooling propellant isn’t a new concept in rocketry, a stipulation for this project was that the cooling system be mobile, so that it can be hauled across the country for launches throughout the year.

The team has developed a scale model system to cool rocket fuel -- and cool it quickly. Not only does the fuel tank need to be filled while a space vehicle sits on the launch pad, but fuel already in the tank needs to be continually pumped back out, recooled and pumped back into the tank to keep it at a sufficiently low temperature until it’s time for launch. The system has the capacity to run for about three hours at a time.