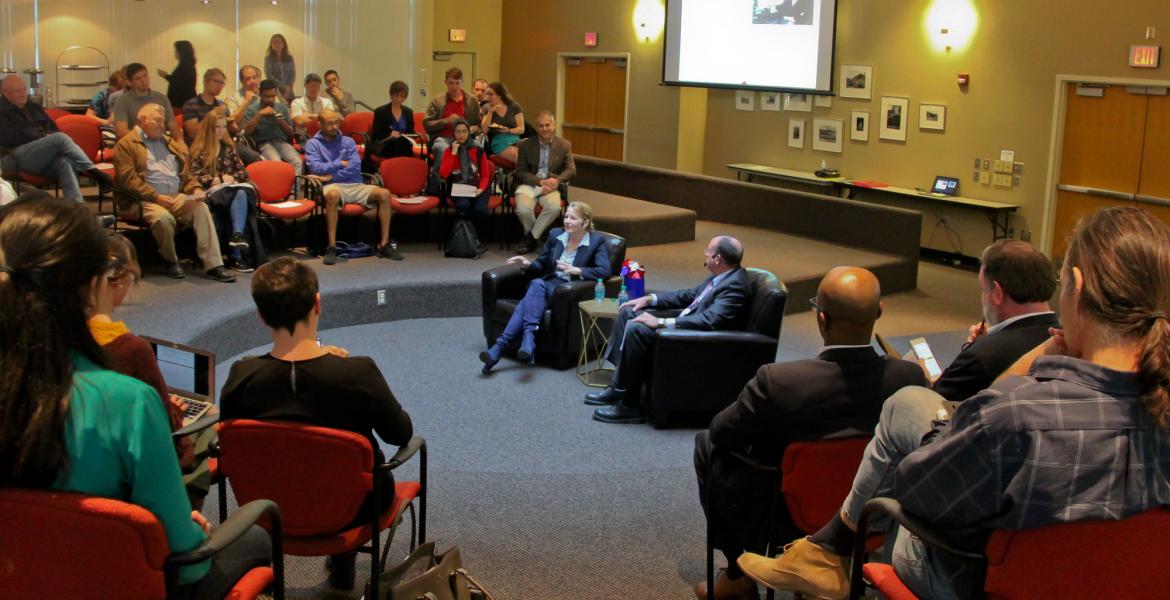 At an intimate gathering in the University of Arizona student union, Raytheon VP of engineering Laura McGill talks about the massive challenges of managing 5,000 engineers and billion-dollar budgets.

By
Emily Dieckman
Time to read
3 minutes
Print
a- a+
Read so far
Laura McGill explains why she loves her career, and what others can do to follow a similar trajectory.

According to Laura McGill, vice president of engineering at Raytheon Missile Systems, being an engineer is the best job in the world.

As a child, McGill attended air shows with her parents. She was always set on a career in science and technology, and it seemed to her that all of the most interesting and fun research was happening in aircraft work.

Even 10 years ago, she said she never would have imagined becoming VP of engineering.

“Every job I’ve had seemed like the most fun job in the world, and I was really reluctant to move on to whatever was offered to me because I loved what I was doing so much,” she said.

Engineering is going to continue to grow for the foreseeable future, and I don’t just mean the next few years -- I mean decades.”

McGill said she thinks of her work like a system where all the parts are connected: Not only is she responsible for keeping track of hundreds of engineers from different disciplines, but she has to coordinate everything from training and development to infrastructure investments to keeping high-performance technology up to date.

“If you’ve played around with Sim City, it’s kind of like that,” she said, to a chorus of laughter. “There are just a lot of pieces, and if you miss any one of those, the city’s not going to work very well. But if you think of it as a systems problem, you can think about how all of the different interfaces have to work together.”

The fact that a company like Raytheon requires so many interfaces to be successful bodes well for aspiring engineers: McGill said that Raytheon needs engineers from every single discipline.

“Engineering is going to continue to grow for the foreseeable future, and I don’t just mean the next few years -- I mean decades,” she said. “You’re in a great time to be embarking on an engineering career, and I hope you find it as fulfilling as I have.”

Her advice to students pursuing careers in engineering was straightforward: Be good at your job, and be curious about what you can do to make it better.

“To me, I think the most successful engineers we have are those who are always wanting to understand more: ‘How does this work? Why does this work? Why did we design it that way?’” she said. “One of the things I’m looking at when I’m looking at resumes is how you talk about your contributions. I don’t want to hear what you were assigned to. I want to hear what you did.”

She added that, even for early-career engineers, there are plenty of ways to gain leadership experience. For example, she suggested taking initiative to create a better work environment for both yourself and your coworkers. She also recommended involvement in professional societies -- she herself is a fellow of the American Institute of Aeronautics and Astronautics and has served as chair of several national technical committees. She even suggested volunteering at a school, with a church or on a children’s sports team to practice leading groups of people with authority.

“Those kinds of volunteer opportunities are great opportunities to build your leadership skills because they let you lead by influence,” she said. “You’ve got to get people engaged in and excited about what you’re trying to accomplish.”

McGill admitted she’d faced some challenges as a woman in engineering, but to her, the benefits balanced out the detriments. Early in her career, she often stood out as being the only woman in a roomful of men, and being memorable was often beneficial.

“There were definitely times in my career where I was assigned to a project, and they took one look at me and told me I was probably not capable of doing that job,” she said. “What I did in those cases was I put my head down and did the job. You don’t think about ‘What if they don’t like me?’ or ‘What if they think I’m incapable of doing the job?’ You just do the job.”

For an engineer, “doing the job” can often be challenging, but facing challenges and overcoming obstacles are part of why McGill said she loves her career so much.

“The university is producing outstanding engineers,” she said. “By choosing to be in an engineering program, you’ve already chosen to do something hard. So, you have already distinguished yourselves among your peers, and I hope that you will continue to do that throughout your career, because that’s what we need.”