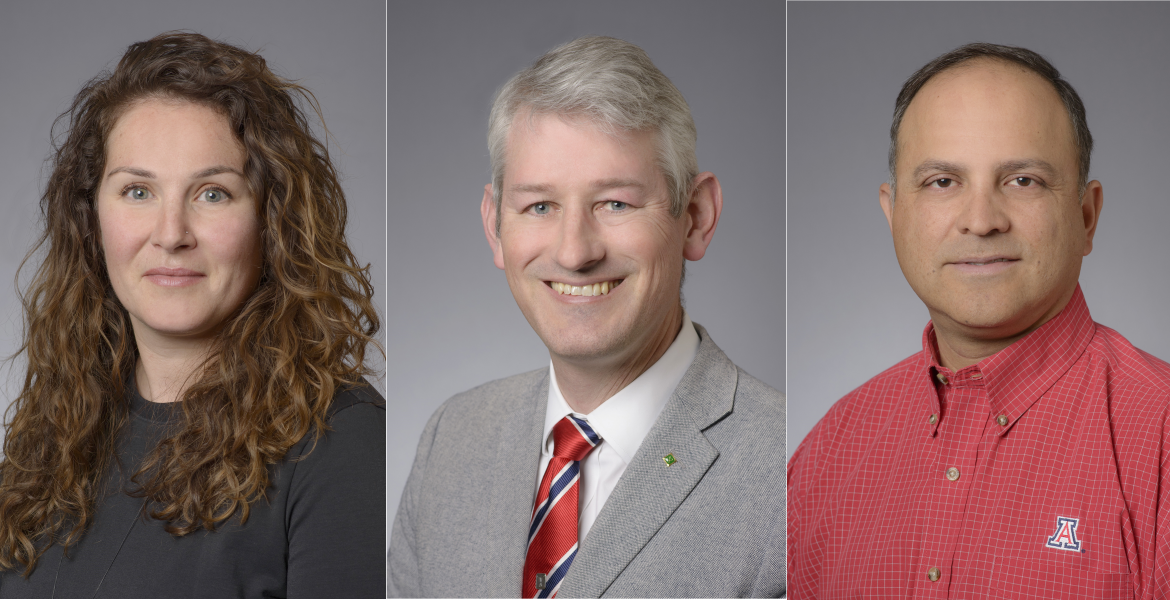 By
Emily Dieckman
Time to read
3 minutes
Print
a- a+
Read so far
Faculty members win university awards for their excellence in research, teaching and outreach.

The University of Arizona Office of the Provost selected three engineering faculty members for university-wide awards, which recognize excellence in research, teaching and outreach. The awardees -- Vicky Karanikola, Jonathan Sprinkle and Ricardo Valerdi -- teach undergraduates how to program autonomous vehicles, purify drinking water for indigenous communities and engage middle schoolers across the country in STEM.

“In my first year at the University of Arizona, I have been continually impressed by the outstanding quality of our faculty – in research, in teaching, in outreach, and as people,” said David W. Hahn, Craig M. Berge dean of the College of Engineering. “Jonathan, Vicky and Ricardo represent excellence in the college and are well-deserving of this prestigious recognition.”

Vicky Karanikola earned her MS and PhD degrees in environmental engineering at the UA, then stayed on to work as a research professor for a year. After completing a postdoctoral fellowship at Yale University, she returned as an assistant professor in chemical and environmental engineering for the UA in fall 2019. Her work in water purification research, particularly in the context of indigenous nations, earned her an Early Career Scholars Award. The award recognizes faculty who are at the forefront of their disciplines and making significant contributions to the priorities laid out in the university’s strategic plan.

Some of her current projects in the newly formed Karanikola Optimization Research for Environmental Sustainability Laboratory, or KORES Lab, focus on using novel materials to remove contaminants like per-and polyfluoroalkyl substances, or PFAS, and ammonia from drinking water. She’s also collaborating with the university’s Indigenous Food, Energy and Water Security and Sovereignty initiative, or Indige-FEWSS. The program aims to address challenges faced by indigenous communities, and Karanikola’s project is focused on waste stream management of water contaminated with uranium.

“Once you filter the uranium out of water to make it potable, then you have another waste stream with an even higher uranium concentration,” she said. “We’re working with graphene to see if we can effectively absorb uranium to further remove it from groundwater.”

Much of Karanikola’s previous work involved indigenous communities as well. Since 2012, she has been working with Engineers Without Borders, an organization that partners with disadvantaged communities to help them meet their basic human needs. She's served as the vice president of the Mountain Region steering committee for the organization since 2016.

“It feels really good when your interests and passions are aligned with the university’s ideas and strategic plan,” she said. “It’s an honor to be a part of that larger mission and to be recognized for it.”

Jonathan Sprinkle, the Litton Industries John M. Leonis Distinguished Associate Professor of electrical and computer engineering, received the Distinguished Scholars Award, which recognizes mid-career faculty who are leading experts in their field. His research into autonomous vehicles examines systems of cars, rather than individual vehicles -- which, at the outset, seems counterintuitive for many drivers.

“When I’m a driver, it feels like the best thing I can do is pass everyone, but if I give up a little bit of that control, it’s better for me in the long run,” he said. “Not only is it better for traffic overall, but it’s better for energy if we maintain a constant speed, instead of speeding up and slowing down.”

Sprinkle set up the Cognitive and Autonomous Test Vehicle, or CAT Vehicle, shortly after he arrived at the UA in 2007. Originally, he used it just for research in his Compositional Systems Laboratory, but he quickly went on to co-found the CAT Vehicle Research Experience for Undergraduates, or REU. The program provides research experience for students across the country, many of whom don’t have such opportunities at their own institutions.

While the undergraduates get a taste of graduate school, UA graduate students act as program mentors and get a chance to experience what it’s like to be professors. Sprinkle provided mentorship for an REU program while he was a postdoctoral scholar, and still keeps in touch with some of the students he worked with. He said the experience contributed to making him the professor he is today.

“I have tremendous respect for the faculty who have received this award in the past, and to be listed alongside them is a tremendous honor,” he said.

Ricardo Valerdi, professor of systems and industrial engineering and faculty athletics representative for the PAC-12 and NCAA, received the Distinguished Outreach Faculty Award for his Science of Sport program, which engages children in STEM activities through sports. The program has directly taught and supported more than 300,000 students and 3,000 teachers across 13 states.

Valerdi was living in Boston, a proud season ticket holder for the Red Sox, when he read “Moneyball,” a book about how statistics are used in baseball.

“This lightbulb went off in my head, thinking, ‘Wow, this stuff that I use for engineering is the same stuff people are using for baseball. What a fantastic connection.’ And I’m a huge baseball fan. The second thought that came to my mind was, ‘Why aren’t we using baseball to teach kids about STEM?’”

He started a Saturday morning program for middle schoolers when he came to the UA in 2011. Before he knew it, he was working with the Arizona Diamondbacks to take the program statewide, then connecting with the Padres, the Angels, the Royals and the Braves. To date, Valerdi has developed programs for 12 major league baseball teams, three NBA teams, and four major league soccer teams, while also developing curricula for sports such as gymnastics, track and field, and swimming. He remains astounded that a project he started in a small classroom in the Old Engineering building has grown into an international program.

“The Science of Sport has really given me an opportunity to have an impact on millions of kids,” he said. “Nothing I had done before had that level of impact.”