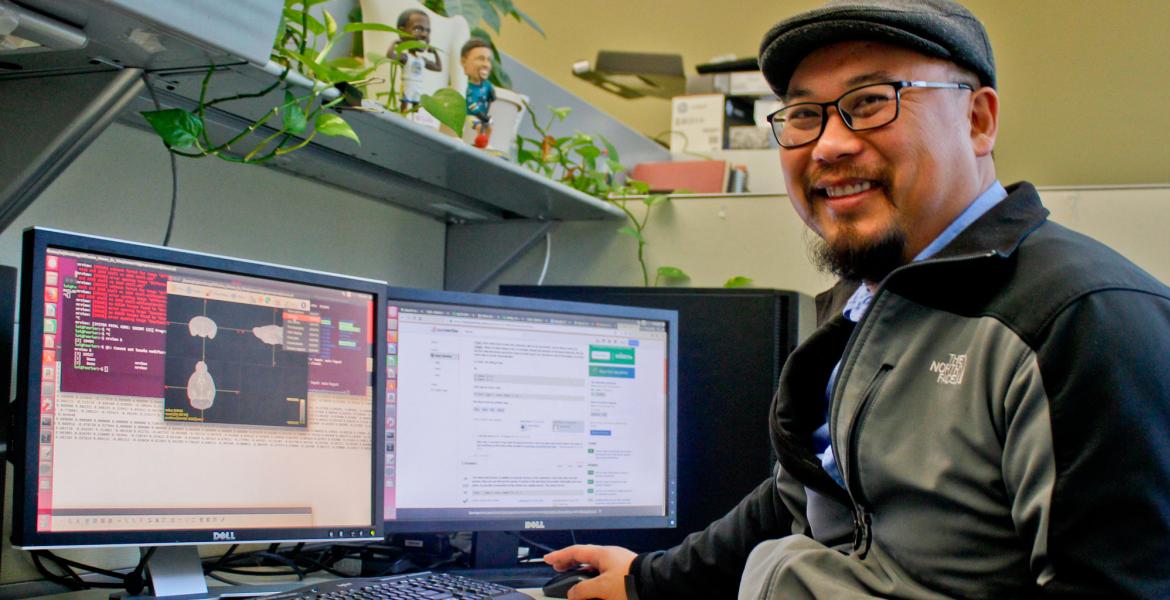 By
Emily Dieckman
Time to read
3 minutes
Print
a- a+
Read so far
Award-winning graduate student Loi Do’s parents wanted him to have a better future. Now, he’s paying it forward with his STEM outreach efforts and Alzheimer’s research.

On a Saturday morning, you might find biomedical engineering graduate student Loi Do helping autistic children and adolescents conduct science experiments, or mentoring his fellow graduate students on how to acclimate to the rigors of a PhD program. In high school, he spent his free periods -- which he’d earned by taking courses at local community colleges every summer -- at a nearby elementary school, teaching math and science to second graders. While he was earning his undergraduate degree in bioengineering at the University of California, Berkeley, he also took courses in education.

“Teaching has been part of my life for my entire life, and being a graduate student in Ted Trouard’s lab has given me opportunities I wouldn’t otherwise have had,” said Do, a winner of the 2018 Centennial Doctorate Degree Award, established by the UA Graduate College to recognize outstanding achievement in the face of social, economic and educational obstacles.

Do’s parents fled communism in China and Vietnam, leaving an Indonesian refugee camp for the United States when Do was just 15 months old. After a few years in Indiana, they moved to San Diego. Do fell in love with science, especially biology, and soaked up as much knowledge as he could with Advanced Placement classes and college courses, and then headed off to the University of California, Berkeley for his undergraduate studies.

The summer after his sophomore year, he did some research in an evolutionary biology class, studying a parasite that lives in the intestinal tracts of raccoons without any harm to the animals, but which can be dangerous to humans.

“If you get one in you, they’ll multiply, and crawl up your body and over your eyeballs and into your brain and eat your brain,” Do said. “That was my first experience with research. I was like, ‘I like this stuff.’”

After college, he got a job at the University of California, San Francisco, where he spent 10 years gaining a mastery of research before setting his sights on a doctoral degree. He was already interested in the UA for its high volume of interdisciplinary research, but a visit to campus for a recruitment event sealed the deal.

“Everyone here seemed like they collaborated well with each other,” he said. “People were so nice, and it seemed like all the people I met, including the students, were helping each other out wherever they could.”

The Tract of the Matter

Do’s research at the UA is fittingly interdisciplinary, combining pharmacology, psychology and bioengineering. He is a fourth-year PhD student studying under biomedical engineering professor Ted Trouard. Do’s primary focus is using magnetic resonance imaging, or MRI, to image the connections in the brain. In his collaboration with Roberta Diaz Brinton, professor in the pharmacology and neurology departments and inaugural director of the UA Center for Innovation in Brain Science, and Aarti Mishra, PhD candidate in the Brinton Lab, he’s studying the correlation between Alzheimer’s disease and ApoE 4, a fat-shuttling protein indicated in Alzheimer’s disease.

"The ApoE 4 gene is a risk factor for Alzheimer’s because it affects the brain’s ability to use glucose as its primary fuel,” Do said. “Brain imaging research by our group has led to advances in treatment for Alzheimer’s patients with this gene.”

He’s also collaborating with Carol Barnes, Regents’ Professor in the Department of Psychology and director of the Evelyn F. McKnight Brain Institute, to study brain connections in a different context: evaluating connections in the brain and how they correlate with intelligence of rodents over time.

“My research with Trouard allows us to noninvasively explore how the brain’s connections change as we age,” Do said. “The long-term translation of this research is to develop therapies that will preserve the important connections to maintain a high quality of life in old age.”

While Loi excels academically, he continues to make time for mentoring others. He’s a graduate student rep for the biomedical engineering department’s graduate studies committee and was on the admissions committee last year. He also works as a grader for a senior medical imaging class, and he has helped design orientation and peer mentorship programs to assist first-year PhD students transition into the program. When he heard the UA Biomedical Engineering Society might not be hosting a booth at the Tucson Festival of Books’ Science City one year, he jumped in to make sure it happened, because he believed it was important. Now, he’s the club’s vice president.

“He doesn’t stop at doing the minimum in terms of coursework and his research,” said Marissa Pier, a fellow PhD student. “He also does club work and serves on committees. He has overcome a lot, and I think he’s great. I pretty much consider him family.”