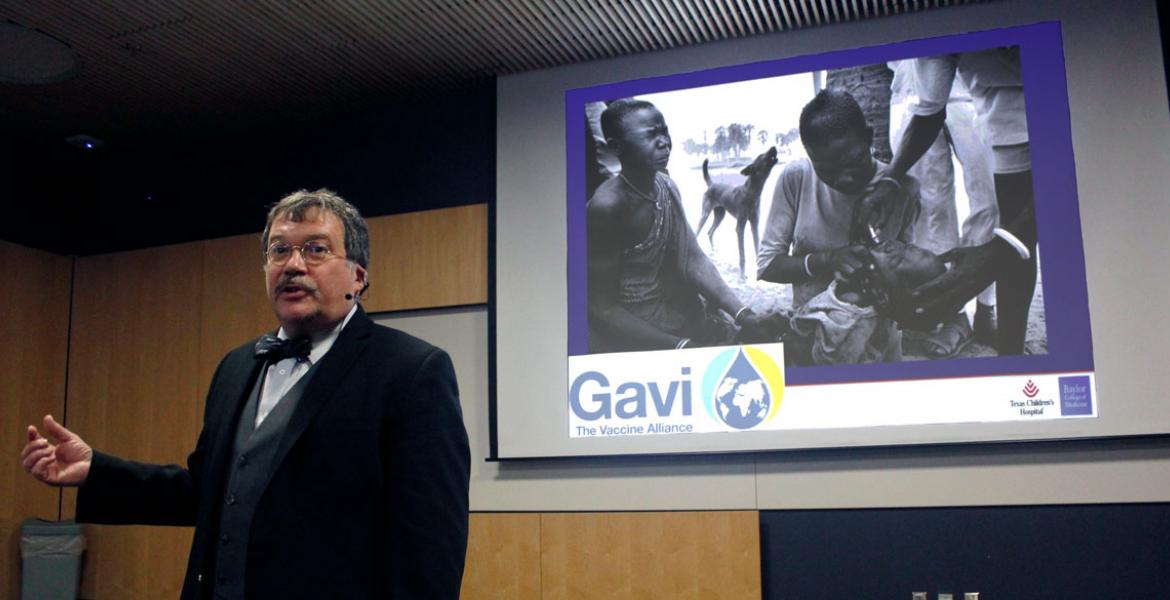 Peter Hotez, dean of the National School of Tropical Medicine and Texas Children's Hospital Endowed Chair of Tropical Pediatrics, speaks about vaccine diplomacy at the University of Arizona

By
Emily Dieckman
Time to read
3 minutes
Print
a- a+
Read so far
Prominent scientist talks about the dangers of the anti-vaccine movement, the nature of science diplomacy and why universities are more important than ever.

Peter Hotez, professor of pediatrics and molecular virology & microbiology and director of the Texas Children’s Center for Vaccine Development at Baylor College of Medicine, Houston, is firm in his stance that vaccines do not cause autism. And he’s no stranger to the disorder – his youngest daughter Rachel is autistic.

“I’m uniquely positioned -- because I’m a vaccine scientist and an autism dad -- to explain why vaccines don’t cause autism,” he said.

Hotez, who is also dean of the National School of Tropical Medicine and the Texas Children’s Hospital Endowed Chair of Tropical Pediatrics, spoke at the University of Arizona April 27 about his vaccine research, science communication and vaccine science diplomacy.

His speech was the final event in a series of science diplomacy talks sponsored by the Science, Health, and Engineering Policy and Diplomacy initiative led by Hassan Vafai and Kevin Lansey in the Department of Civil Engineering and Engineering Mechanics.

“The results suggest that there’s 2.5 million childhood lives saved every year through these initiatives,” he said. “At one point over the last few years, we even talked about the elimination of measles -- one of the great killers of children globally.”

But then, in 2017, there were more than 21,000 cases of measles in Europe, a fourfold increase from the previous year. Likewise, the United States saw 23 measles outbreaks in 2014 and a multistate measles outbreak in 2015 that began in California.

Such outbreaks are the result of the now 20-year-old anti-vaccine movement. In 1998, a paper published in the Lancet medical journal claimed to have found evidence linking the measles component of the MMR vaccine to “pervasive development disorder,” now known as autism. After extensive investigations and a ruling by Britain’s General Medical Council, the paper was officially retracted in 2010, but the damage was done.

At the time of the 2015 measles outbreak, California was one of 19 states that allowed parents to opt out of vaccinating their children due to personal or philosophical belief, but after the outbreak, the state stopped offering the exemption.

“The California state legislature did the right thing,” Hotez said. “The problem was then everybody moved to Texas. There was a dramatic rise to more than 50,000 kids in Texas public schools not getting vaccinated.”

As a scientist, if you’re willing to take the time to make a difference, people will listen to you as a subject matter expert.”

The anti-vaccine movement continues to spread as well, in the form of political action committees, children’s books such as “Melanie’s Marvelous Measles” and documentaries such as “Vaxxed,” which was cowritten and directed by Andrew Wakefield, the author of the 1998 Lancet paper who has since been struck off the UK medical register and had his medical license revoked.

“I think part of that is our fault as researchers,” Hotez said. “We’re so fixed on our grants and our papers, and we’re not out there engaging people. “As a scientist, if you’re willing to take the time to make a difference, people will listen to you as a subject matter expert.”

What We Can Do

Hotez served as the US. Envoy for the Obama Administration from 2014 to 2016, with a focus on vaccine initiatives between the U.S. and countries in the Middle East and North Africa. He also has written several books for general audiences, including “Forgotten People, Forgotten Diseases” and the forthcoming “Vaccines Did Not Cause Rachel’s Autism.”

In 2003, he collaborated with David Molyneux, former director of the Center for Neglected Tropical Diseases at the Liverpool School of Tropical Medicine in the U.K., and Alan Fenwick, director of the Schistosomiasis Control Initiative at Imperial College London, to start a “marketing campaign” of sorts. The gist of it: They identified a group of tropical diseases that cause poverty due to their long-term effects on worker productivity and child development, and began collectively referring to them as Neglected Tropical Diseases, or NTDs.

The term “NTD” gave diseases most people haven’t heard of -- like leishmaniasis, schistosomiasis and soil-transmitted helminthiases -- a platform, and, hopefully, a chance to receive some attention and funding. In 2006, Hotez co-founded the Global Network for Neglected Tropical Diseases to help with this effort.

Vaccine production, Hotez said, tends to get stuck in its first stage: Scientists produce the pilot material, but can’t expand to industrial-scale production. The solution? Involve people with varying areas of expertise to ensure that scientists’ work is as far-reaching as possible.

“This is why we need universities like the University of Arizona and smart people from law school and the business community and international relations,” Hotez said. “The reason people love America is not for our military. It’s for places like the University of Arizona and Iowa State. It’s our land grant research universities where we’ve trained a whole generation of leaders across the globe.”