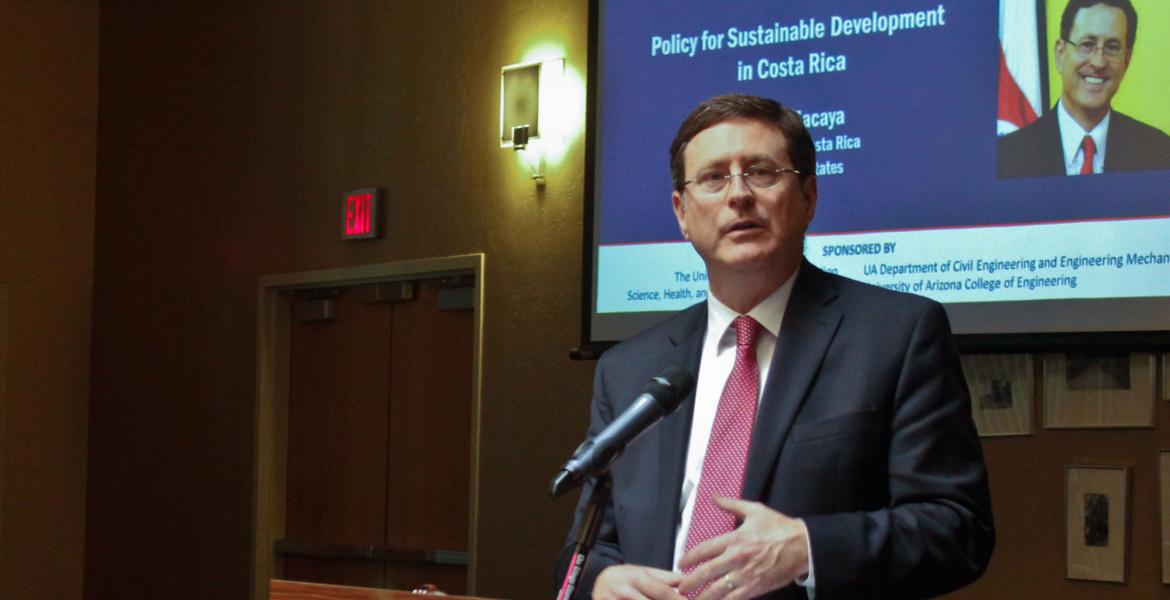 Roman Macaya, ambassador of Costa Rica to the United States, came to the University of Arizona on Friday, March 2, to speak about Costa Rica’s policies for sustainable development.

The event was part of a series of science diplomacy talks sponsored by Science, Health, and Engineering Policy and Diplomacy initiative led by Hassan Vafai and Kevin Lansey in the Department of Civil Engineering and Engineering Mechanics.

Macaya was sworn in as ambassador in August 2014. He earned his undergraduate degree in chemistry from Middlebury College, then a PhD in biochemistry from UCLA and an MBA from Wharton Business School. Before his role as ambassador, he served in positions ranging from senior scientist at a biotechnology company to the general manager of an agrochemical company based in Costa Rica.

He started the talk by providing some context for Costa Rica’s history: After gaining their independence, fighting off invaders to Central America and losing 10 percent of their population to a cholera outbreak during the 19th century, the people of Costa Rica took a collective breath and sat down to create a development model. In 1869, they decided to make education mandatory, free and paid for by the state -- for both boys and girls.

“With this policy, we wanted the daughter of a peasant on a coffee farm to have the same education as the son of the owner of the coffee farm,” he said. “And that was the start of a very horizontal society, and that persists even to this day.”

In 1948, a brief civil war struck Costa Rica, and as a result, the constitution was rewritten, leading to the birth of the second republic. One of the biggest changes for the new republic was the abolishment of the military.

“This year, we celebrate the 70th anniversary of Costa Rica having no army,” Macaya said. “This allowed us to invest what would normally go into a military into health and education at a sustained rate that would not have been possible if we had a military.”

“What all of these have in common is that they require an education,” Macaya said. “That sustained investment in healthcare starts to make itself seen in our exports. You could say medical tourism is our new coffee.”

“As a scientist by training, I thought combining science and diplomacy was a natural fit,” Macaya said. “Science can play a major role not just in generating solutions, but in really guiding policy.”

For example, Macaya admitted that, for a period in the 1960s and 1970s, Costa Rica had one of the highest deforestation rates in the world. The country’s legislators took action, instituting a national park system similar to that of the United States and taking advantage of a U.S. “debt-for-nature” swap, which forgave Costa Rica’s debt to the United States in exchange for a commitment to conservation.

To top it off, they added a tax on fuel, which goes into a fund for private landowners who agree not to deforest or farm on their land, creating an incentive to put the earth first.

“From 1986 to 2012, over a period of 26 years, Costa Rica went from 21 percent forest coverage to 52 percent,” Macaya said. “We became the first tropical nation to reverse deforestation, and we almost doubled our population and tripled our GDP per capita. So we had strong economic growth, we had population growth and we had a forest growth at the same time.”

When someone from the audience asked if Costa Rica ever has difficulty in coordinating efforts between different governmental departments, Macaya explained that the country has a minister of national planning whose job is to coordinate the efforts of other ministries. Not only that, but the ministries of the environment and of energy are combined into a single department, the Ministry of Environment, Energy and Telecommunications. Two factions that are often at odds are, in Costa Rica, one and the same.

“The same person that has to plan out and satisfy the energy needs of the country is also in charge of making sure that it gets done in an environmentally sustainable way,” he said.

Costa Rica is also home to one of only five “blue zones” in the world, areas where there are concentrations of people with unusually long life spans. Its biodiversity is the richest in the world on a square-mile basis, which opens up practically endless opportunities for scientists. Not to mention, Macaya went on, that it’s consistently ranked as one of the happiest countries in the world.

“I hope that all of you, at the very least, will make Costa Rica your next vacation destination,” he said.