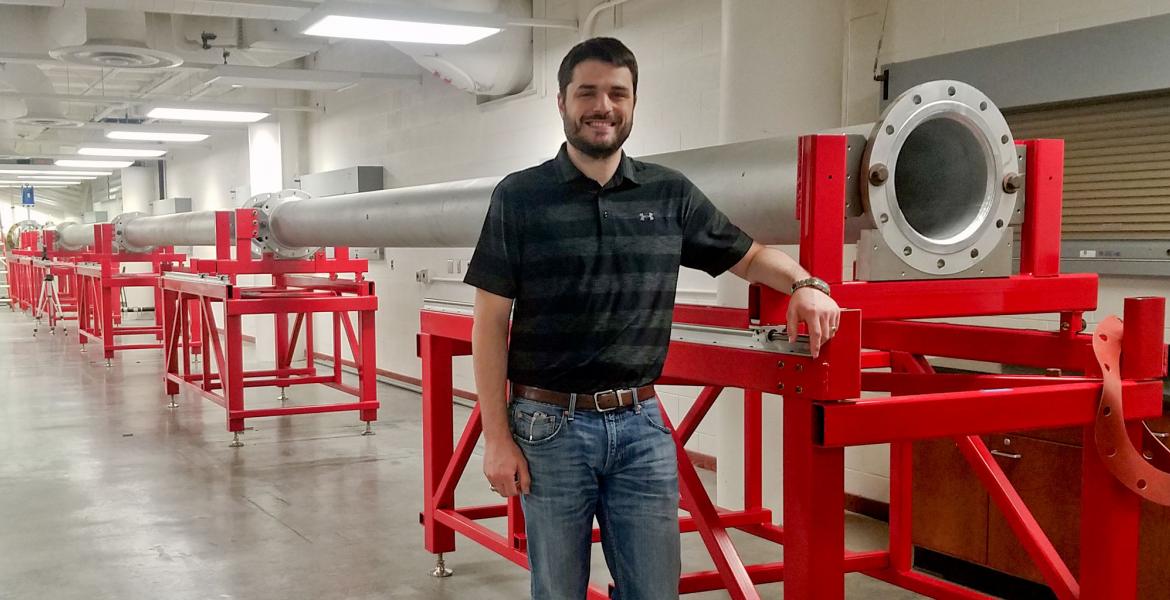 “MythBusters” debuted when University of Arizona Aerospace and Mechanical Engineering assistant professor Stuart “Alex” Craig was in middle school. By the time the show ended in 2016, he was doing postdoctoral work at Los Alamos National Laboratory and knew that the show didn’t always get its science right.

Between watching the show, seeing the movie “Apollo 13” when he was a kid and growing up with a dad who’s approaching his 40th year working at Boeing, the decision was made early: Craig wanted to be an engineer.

He's achieved that and more -- he was recently selected as one of 31 researchers in the United States to receive a Young Investigator Award from the Office of Naval Research. The Young Investigator Program is designed to support scientists who are on their first or second full-time tenure track or tenure-track equivalent position. He will receive approximately $637,000 over the course of three years to fund his research into hypersonics.

“We hired Dr. Craig after undergoing a national search for an assistant professor position in the area of experimental hypersonics,” said Jeff Goldberg, acting provost of the University of Arizona and former dean of the College of Engineering. “At that time, we believed that he was far better than the other candidates we had, and we have not been disappointed.”

Cone with the Wind

In 2017, Craig received another grant from the Office of Naval Research for experiments on cones “traveling” straight ahead at hypersonic speeds -- in a wind tunnel, objects stay still while the air moves around them. His research team uses cones because they are shaped roughly like the front end of an aircraft or missile, and because their simple geometry makes experiments in the wind tunnel easy to compare to computational experiments by other researchers. In a new set of experiments funded by this year’s grant, he will examine how cones travel through hypersonic conditions when tilted at a slight upward angle of attack.

When aircraft or missiles move through the air at such high speeds, they face several challenges, particularly when the airflow around a vehicle changes from laminar, or smooth like a faucet turned on at low power, to turbulent, or chaotic like a faucet turned on at full blast. Turbulent airflow can increase a vehicle’s drag by up to 10 times, for example. Air that doesn’t mix well with the fuel in a vehicle’s engine can affect its combustion. And, perhaps most importantly for vehicles moving at such high speeds, the air around the vehicle can get extremely hot.

“Understanding how fast that heat in the air around the vehicle transfers to the surface of the vehicle is a very big design challenge,” Craig said. “Essentially, we’re trying to come up with a better physics-based understanding of how these boundary layers transition from laminar to turbulent so that we can understand the heat load better and make vehicles safer and more efficient.”

The two tunnels being built in the UA Department of Aerospace and Mechanical Engineering are low-disturbance, or “quiet” tunnels, but that’s a bit of a misnomer -- they’re still loud enough that you’d need to wear ear protection if you were near them while they were running.

“Traditionally, a wind tunnel does a wonderful job at some things and not so great at others,” Craig said. “One of the things that they typically don’t get correct is free-stream fluctuations. In a wind tunnel, you’ll see velocity and pressure fluctuate by 1 to 3 percent, whereas if you’re flying in a plane through the atmosphere, there’s basically none of those fluctuations.”

These fluctuations drastically affect the research being done on laminar-turbulent transition of boundary layers, so low-disturbance tunnels are designed to reduce these fluctuations to about one one-hundredth of a percent or less.

“We’re pretty much building a new lab from the ground up, so it’s exciting to be right here at the start of it,” said John Flood, an aerospace and mechanical engineering grad student who works in Craig’s lab. “Dr. Craig is easy to work for and easy to believe in, because you can tell he has a clear vision for what he wants to do in the lab. I learn so much from him every day.”