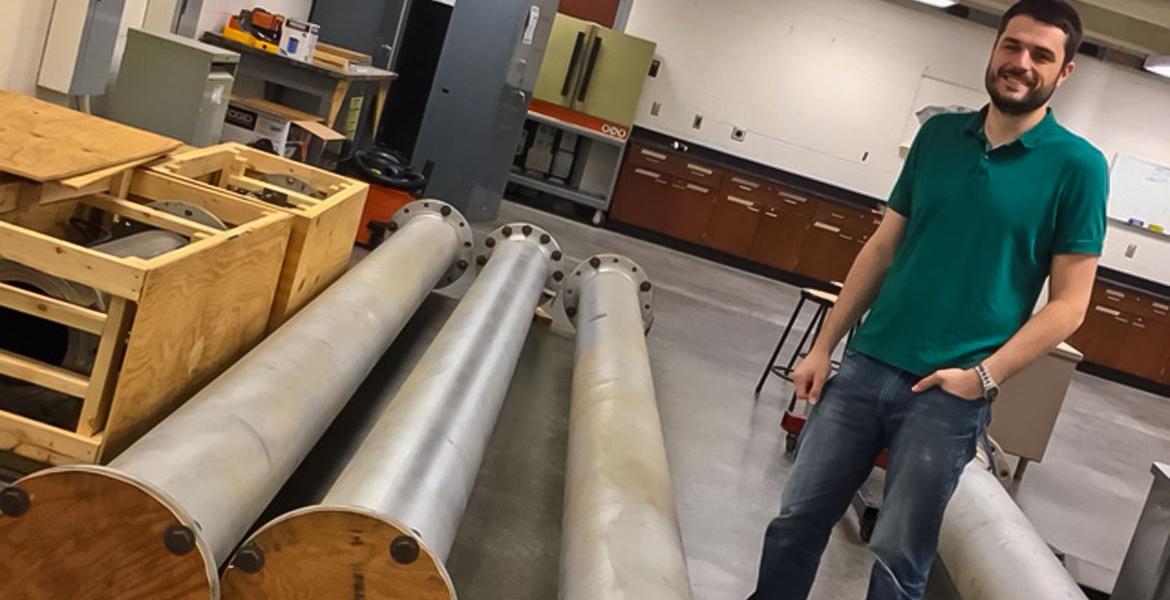 By
Jill Goetz
Time to read
3 minutes
Print
a- a+
Read so far
The College of Engineering is building two additional wind tunnels to explore instability and materials failure in vehicles traveling at extremely high speeds.

Engineers are installing three 20-foot-long tubes for a new high-speed wind tunnel in the Aerospace and Mechanical Engineering Building, ushering in an era of hypersonic discovery at the University of Arizona.

“There have been peaks and valleys in U.S. hypersonic research since World War II,” said assistant professor Stuart “Alex” Craig, who joined the UA Department of Aerospace and Mechanical Engineering in 2016. “With China and Russia flight-testing hypersonic drone aircraft whose missile payloads can strike targets thousands of miles away in less than an hour, we’re definitely seeing an uptick.”

Craig and two other faculty in the department, both pioneering researchers in fluid dynamics, won awards in spring 2017 totaling nearly $2 million from the Office of Naval Research, or ONR, to study problems of instability and materials failure for aircraft and missiles flying at highly supersonic, or hypersonic, speeds of Mach 5 and above.

“The Navy is looking to develop hypersonic missiles for ship-to-ship warfare that would be harder for enemies to shoot down,” Craig said. The research also has potential applications beyond the military, he said, perhaps even for commercial flight -- as aerospace giants like Boeing and space tourism visionaries like Elon Musk move hypersonic commercial jets and civilian spacecraft closer to reality.

The wind tunnel under construction, expected to be ready for testing in spring 2018, is a low-disturbance, or quiet, Mach 4 tunnel. A second quiet tunnel, slated for completion in 2020, will shoot bursts of air at Mach 5, five times the speed of sound -- about 3,800 mph. These new facilities will supplement the UA’s existing wind tunnels, where researchers conduct experiments at subsonic and supersonic speeds.

“Relatively few U.S. universities have wind tunnels capable of airflows at Mach 4 or 5,” said Craig, who has a bachelor’s degree in mechanical engineering from the University of Illinois at Urbana-Champaign and a doctorate in aerospace engineering from Texas A&M University, and did postdoctoral work at Los Alamos National Laboratory. “Quiet flow tunnels are especially important for approximating the calm conditions encountered by aircraft in the atmosphere.”

With an ONR award of $560,000, Craig is collaborating with UA professor of aerospace and mechanical engineering Hermann Fasel, an expert in computer simulations and modeling, who received an additional $485,000 from the ONR. In the new wind tunnels, Craig will put Fasel’s computations to the test.

Professor of aerospace and mechanical engineering and applied mathematics Anatoli Tumin, a physicist who worked on the former Soviet Union’s space program and conducted research in Israel before joining the UA in 2000, received the third Navy award this spring, of $934,000. He is advancing theory on how gases and sound waves behave at hypersonic speeds.

Hypersonics on the Edge

At speeds of Mach 5 and higher, the air begins to change chemically and becomes an electrically charged field. Craig, Fasel and Tumin are studying the complex and still poorly understood phenomena that occur at the boundary layer between laminar and turbulent airflows at such high speeds.

“Whenever you’ve got anything flying through the air, a thin layer of air forms over its surface,” Craig explained. “That layer may flow in a smooth, or laminar fashion -- like honey pouring from a jar -- or in a chaotic, turbulent way -- like turning on a faucet at full blast.”

When vehicles traveling at hypersonic speeds encounter airflows at the laminar-turbulent boundary, they experience significantly increased drag and become dangerously hot. Such aerothermodynamic heating is why rockets require deep layers of thermal insulation to keep them from burning up upon re-entering Earth’s atmosphere.

The UA engineers’ investigations could help overcome some of the challenges of high-speed flight, Craig said, and help manufacturers design more efficient vehicles with greater controllability and larger payloads.

Craig said he joined the UA for the chance to collaborate with renowned fluid dynamics researchers who are taking different approaches to understanding laminar-turbulent transition.

“Professors Fasel and Tumin are pillars in the stability and transition field,” Craig said. “Even as computers get faster and better at simulation, there are still a lot of unknowns in terms of what initial conditions we need for testing our models and theories.

"If you want to address problems robustly, you need cooperation among researchers with computational, theoretical and experimental expertise.”

He added, “Having these researchers under the same roof gives our Department of Aerospace and Mechanical Engineering an edge in being able to bridge gaps in knowledge and best prepare our faculty and students to solve problems of hypersonic flight.”

Alex Craig’s project, “Nonlinear Interactions Between First- and Mack-Mode Instabilities in High-Supersonic Flows,” is funded by ONR grant No. N00014-17-1-2340.