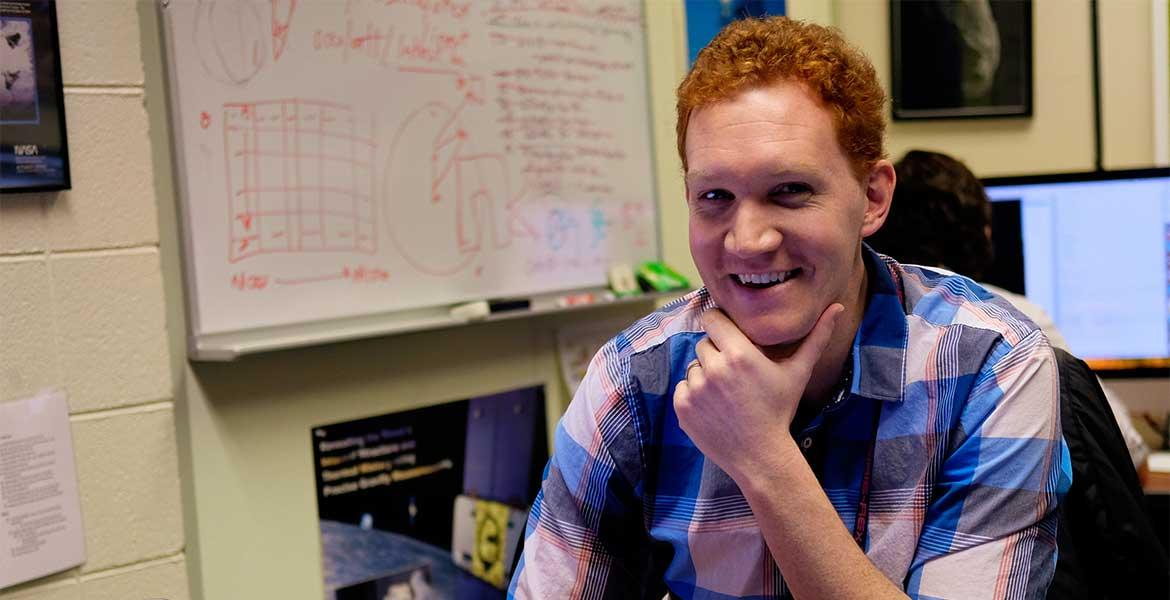 Daniel Wibben grew up with Arizona Wildcats basketball -- watching the men’s team win a record-breaking number of Pac-12 tournaments and take the 1997 NCAA championship. Since then, he’s had a hand in helping the University of Arizona break a few out-of-this-world records himself.

Wibben earned a UA bachelor’s degree in aerospace engineering in 2010. While he was studying for his master’s and doctoral degrees in systems engineering, completed in 2012 and 2015, he was on the team that planned the OSIRIS-REx asteroid sample return mission. Then, the UA Engineering alumnus continued his work on the project as a maneuver design lead at the aerospace company KinetX Inc., where he is helping navigate the spacecraft to the near-Earth asteroid Bennu and back.

OSIRIS-REx, which launched in September 2016, entered orbit around Bennu on New Year’s Eve 2018. At only 510 meters from pole to pole, Bennu is the smallest object to ever be orbited by a spacecraft. The mission also broke the record for the closest orbit of a planetary body, previously held by the Rosetta spacecraft’s orbit four miles from the center of a comet in 2016. OSIRIS-REx is in an orbit just 0.4 miles, or 680 meters, from Bennu’s surface as of July 2019. Both accomplishments have been recognized by Guinness World Records.

“The spacecraft is closer to Bennu now than the height of the tallest building on Earth, the Burj Khalifa in Dubai, which stands at 829.8 meters high,” Wibben said. “We’ve gotten as close as 450 meters from the surface. We’re getting nice and snug.”

From Concept to Orbit

Wibben recently received NASA’s Exceptional Engineering Achievement Medal for his contributions to planetary science and the OSIRIS-REx mission. The entire navigation team of OSIRIS-REx won the Silver Achievement Medal for its stellar achievements in supporting one or more of NASA’s core values. He isn't the first Wildcat to be recognized with this award: Astronaut Don Pettit, who earned his doctoral degree in chemical engineering at the UA in 1983, received the medal in 2006.

“Dan strives to thoroughly understand and solve every problem that has been presented to him,” said Ken Williams, a flight director at KinetX Aerospace. “He has pushed the envelope on the state of the art in navigating around such a body beyond the conceptual and theoretical into the realm of actual flight operations.”

In his nomination letter for Wibben, Michael Moreau, OSIRIS-REx flight dynamics system manager for NASA’s Goddard Space Flight Center, says that Wibben is an insightful leader and mentor and one of the most important contributors to setting up OSIRIS REx’s record-breaking orbit.

Once I understood what the mission was trying to do, it dawned on me: This is a really amazing, ambitious project. I’m in school, and I get to work on a real NASA mission -- this rocket is actually going to fly. I’m not going to get that opportunity anywhere else.”

The original mission concept required six separate maneuvers to place the spacecraft into orbit once it arrived at Bennu, but Wibben made the mission simpler and less risky with a design requiring only two. He also applied the “frozen orbit” concept, designed to balance out the forces from gravity and solar radiation pressure, to a small-body craft for the first time ever. As a result, weekly adjustments scheduled in the first phase of orbit to correct the spacecraft’s trajectory weren’t needed.

“The achieved orbit is so stable that the spacecraft could remain for months with no maintenance maneuvers,” Moreau said. “And this just touches the surface of Dan’s contributions to the success of the project to date.”

Wibben was just starting his master’s degree in systems engineering when NASA selected the UA to lead the OSIRIS-REx mission. He has been involved with the project since 2012.

“Once I understood what the mission was trying to do, it dawned on me,” he said. “This is a really amazing, ambitious project. I’m in school, and I get to work on a real NASA mission -- this rocket is actually going to fly. I’m not going to get that opportunity anywhere else.”

At the UA, Wibben worked largely on systems engineering in the Science Processing and Operations Center. At KinetX, he plans the trajectory of the spacecraft: Where will the vehicle need to fly in the future? When do the thrusters need to be turned on, what direction should they be pointing in, and for how long should they be on to accomplish that trajectory?

Most of Wibben’s time is spent at a computer working on code. Still, he gets to answer the standard question, “What do you do for work?” with the not-so-standard “I’m a rocket scientist.”

“We arrived at the asteroid in December, and since then we’ve slowly been getting closer and closer and learning more and more about it,” Wibben said. “It’s never gotten dull. There are always new things to be working on, new challenges to face and new problems to solve.”