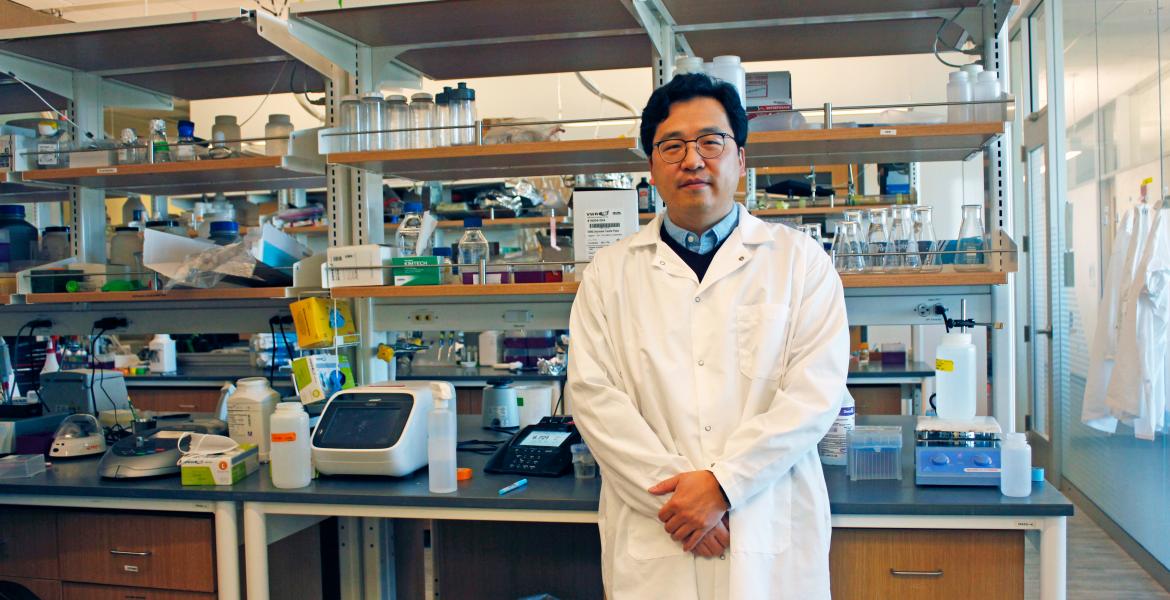 By
Emily Dieckman
Time to read
3 minutes
Print
a- a+
Read so far
CAREER Awardee is building new drug delivery vehicles could improve efficacy and reduce negative side effects of lifesaving drugs such as chemotherapy.

From the liver to the kidneys to the lungs, the human body is equipped with many levels of filters, which protect the body from harmful outside materials. But this system also has its downsides. Critically important drugs such as chemotherapy or multiple sclerosis treatments are also foreign materials, so the body filters out a large portion of these drugs – up to 90%, in some cases.

One way scientists and physicians compensate for this is by giving patients substantial quantities of a drug. This way, even though much of the drug gets filtered out, enough of it gets through to get the job done. But higher dosage levels also mean more adverse side effects. To avoid such high dosages, another strategy is to design the vehicle carrying the drug to target a specific destination.

“Many drug delivery vehicles fail to reach the right location in the body, and the main reason is because our bodies have this really nice filtering system. So many of them end up in the liver, the kidney or the spleen,” said Minkyu Kim, assistant professor of materials science and engineering and biomedical engineering. “If we can overcome this by developing new drug delivery vehicles, it will be a significant advance.”

Kim is setting out to do just that with a $600,000 CAREER Award, the National Science Foundation’s most prestigious award in support of early-career faculty who have the potential to serve as academic role models in research and education. His plan is to combine materials science, synthetic biology and multiscale mechanics to develop a new form of drug delivery microparticle designed to bypass the body’s filtration systems.

“We're incredibly proud to have Minkyu representing MSE among the ranks of NSF CAREER awardees,” said Sammy Tin, inaugural Patrick R. Taylor Endowed Chair in Materials Science and Engineering. “Minkyu's work at the intersection of MSE and biomedical engineering is an excellent example of how materials scientists can directly improve human lives.”

How do you get past a system designed to deny entry to outsiders? You masquerade as an insider. Kim is creating a microparticle vehicle that mimics the properties of a red blood cell. Those cells consist of a protein- and lipid-based casing carrying hemoglobin, the protein which transports oxygen throughout the body. Instead of being a vehicle for hemoglobin, the microparticle Kim designs will be a vehicle for drug particles. He will first use a well-established process to contain a drug in a microsphere core. Then, he will add a layer of artificial proteins he develops, followed by a lipid bilayer. Taken together, these components imitate a red blood cell, and even enable a controlled release of the drug. It can carry these drugs past a series of biological filters to the part of the body where the drugs are needed.

It’s as if you needed to attend an event that only admitted people driving red cars, so you borrowed a red car from a friend. You’d get to where you had to go, because you used a vehicle that was allowed in. Of course, building a protein structure that imitates the qualities of a red blood cell is much more complicated than borrowing a car. Red blood cells have a few key properties which are most important to imitate. For one, they can squeeze through very small spaces and return to their original shape, over and over again.

“A red blood cell is about 7 micrometers in diameter, and they go through microcapillaries, which are a lot smaller than that,” said Kim, who is also a member of the BIO5 Institute. “The cytoskeleton of a red blood cell is made up of a well-ordered structure of proteins. When it needs to move through a small space, that structure can be extended by protein unfolding, but once the stresses are removed, the original structure returns. A red blood cell can do this a thousand times and continue to show the same mechanical behavior.”

Red blood cells can also stay in the body much longer than typical drug delivery vehicles.

“Right now, the fate of drug delivery vehicles is up to four weeks, maximum,” Kim said. “My goal is for these microparticles to reach the lifespan of a red blood cell, which is about four months. And eventually, I hope, even longer.”

Because red blood cells are so effective at moving through the body, some researchers have investigated the possibility of using actual red blood cells as drug vehicles. But this requires human blood donations, particular storage methods, and careful accounting of blood type. This vehicle Kim plans to create could be adapted to carry a wide variety of drugs and used in patients with any blood type.

Kim is working with Tech Launch Arizona, the commercialization arm of the university, to license the technology to a company that can take it forward into the marketplace. In addition to his own research efforts, Kim also plans to develop an interdisciplinary research program for students, grounded in his experience as a faculty member in two departments. He will create new modules for undergraduates focused on biopolymers and pair each undergraduate student in his lab with a graduate student mentor.

He will also continue his ongoing efforts to work with and recruit underrepresented students, via his collaborations with the University of Arizona’s Keep Engaging Youth in STEM (KEYS) program, the Undergraduate Research Opportunities Consortium (UROC) and the National Institutes of Health’s Maximizing Access to Research Careers (MARC) program. Jocelyne Rivera, a former MARC trainee and 2021 graduate who conducted research in Kim’s lab, was the first Hispanic woman accepted to the National Institutes of Health Oxford-Cambridge Scholars Program.