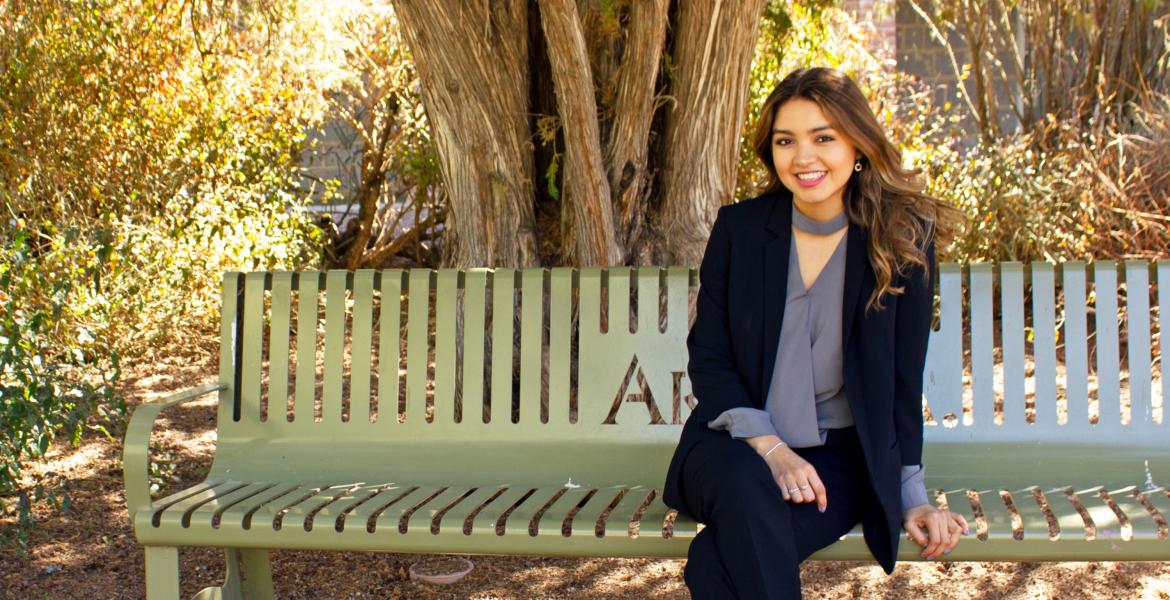 Biomedical engineering senior Jocelyne Rivera is the first Hispanic woman to be accepted to the National Institutes of Health Oxford-Cambridge Scholars Program.

By
Emily Dieckman
Time to read
3 minutes
Print
a- a+
Read so far
First-generation transfer student heading to prestigious doctoral program aims to inspire other women in STEM.

Jocelyne Rivera is the first Hispanic woman to be accepted to the National Institutes of Health Oxford-Cambridge Scholars Program, an accelerated doctoral training program for students committed to biomedical research careers.

The biomedical engineering senior and first-generation student, who grew up in Hermosillo, Mexico, will spend two years conducting research at the University of Oxford after her May 2021 graduation.

“My plan is to represent my community in research, science and engineering wherever I go,” she said.

Rivera’s childhood dream was to become a doctor. However, when she was 15, her younger cousin was diagnosed with a rare bone disease, and a team of biomedical engineers built him a personalized prosthetic leg so he could walk properly. That experience helped solidify what Rivera wanted to do with her life.

After high school, she moved to Germany, a world leader in medical technologies. The plan was to spend a year learning German before starting her technical studies. But being so far from her tight-knit family was difficult, and when the first year was up, the now-trilingual Rivera decided to pursue her studies in Tucson.

She spent two years at Pima Community College, then hit the ground running as soon as she transferred to the University of Arizona. When BME assistant professor Philipp Gutruf’s German surname caught her eye at a career fair, she walked up and asked him about his research – in German. Rivera joined the Gutruf Lab as an undergraduate researcher in spring 2018.

“Jocelyne was working in my lab at the very beginning of me establishing my research program,” he said. “She was a very enthusiastic member of the group who was keen to acquire new knowledge.”

Rivera studied biosensors in the Gutruf Lab for a year then applied for the UArizona Maximizing Access to Research Careers Program, which provides training, mentoring and financial support to underrepresented students in biomedical fields. In the program, she joined materials science and engineering and BME professor Minkyu Kim’s lab to study biomaterials and develop microscopic gels for treating cardiovascular disease.

“Jocelyne stood out as a quick learner and extremely hard worker,” said David Knoff, a graduate student in the Kim Research Group who acted as Rivera’s mentor. “She always set a great example for other researchers in the lab and demonstrated a willingness to go the extra mile to succeed in our research projects. Beyond her intelligence and work ethic, though, it is Jocelyne's passion and curiosity that always stood out to me.”

Rivera’s diligence and smarts weren’t the only things that set her apart. In some of her classes, she was the only woman, or Hispanic woman, in the room. Though she rarely encountered intentionally mean or exclusionary peers, she did at times feel otherized, like when classmates remarked on her Mexican accent. When she did encounter other Hispanic women, like a researcher from Colombia she met in Kim’s lab who also spoke Spanish and English, it meant a lot.

“You can’t imagine how important it is to have that diversity,” she said. “We were both interested in the same thing, and I felt that I belonged there. It motivated us to do even small things, like run an experiment where we weren’t sure what was going to happen. There were other circumstances where I felt different or less than. That really motivated me to advocate for women in engineering and science.”

Being involved in groups like the Society of Hispanic Professional Engineers, the Society of Women Engineers and the National Society of Leadership and Success also helped Rivera find a community – and do her part paving the way for others.

Rivera, who is considering a career as a professor, isn’t one to falter in the face of obstacles.

“What I really want to encourage women to do is that, even if we don’t feel like we belong in a community, if you really want to do something, just do it,” she said. “Being a woman shouldn’t stop you from studying engineering or going into science. Nothing should stop women.”

During her junior year, she was accepted to the Nanotechnology for Biology and Bioengineering Research Experience for Undergraduates, or REU, program at Johns Hopkins University. Among a handful of participants selected out of about 600 students, she considers the offer one of her greatest accomplishments. Unfortunately, the program was canceled when COVID-19 struck the United States.

Devastated at first, she picked herself up and began looking for a virtual summer research position. The pickings were slim, and competition was fierce as students across the country scrambled for last-minute replacements. But she made it into the Multi-Scale Systems Bioengineering and Biomedical Data Science REU at the University of Virginia, a virtual program for computational modeling.

Being a woman shouldn’t stop you from studying engineering or going into science. Nothing should stop women.”

“I was used to going into the lab and working with my hands, which was amazing for me,” Rivera said. “Here, I would use all of my skills and experience in a new area.”

Looking for a way to connect it with the hands-on work she was passionate about, she started building a program that uses simulations to validate experimental results from Kim’s lab.

“Jocelyne exhibited tremendous self-drive and creativity throughout her time in my lab, and her research project was so well executed and innovative that she was able to present her research on the national stage at Annual Biomedical Research Conference for Minority Students last fall,” said Shayn Peirce-Cottler, biomedical engineering professor at the University of Virginia. “Indeed, her project was so interesting and successful that it continued as a collaborative research project across my lab and that of her research mentor at the University of Arizona throughout the fall semester.”

Her family isn’t surprised that Rivera’s work has led to the NIH Oxford-Cambridge Scholars Program, which has an acceptance rate of 10%.

“As a child, Jocelyne was sweet, but very dedicated, always achieving what she set out to do,” said Rivera’s mother, Sandra, in Spanish, with her daughter translating. “There were a lot of sacrifices having her far away from us. We are so proud of her.”