By
Pete Brown
Time to read
1 minute
Print
a- a+
Read so far
Tribikram Kundu, a professor in the UA department of civil engineering and engineering mechanics, recently received a lifetime achievement award from the Society of Optical Engineering.

Kundu received his award March 12 at the 19th annual SPIE Smart Structures and Materials & Nondestructive Evaluation and Health Monitoring conference in San Diego. The Society of Optical Engineering used to be called the Society of Photo-Instrumentation Engineering, and is still known as SPIE. 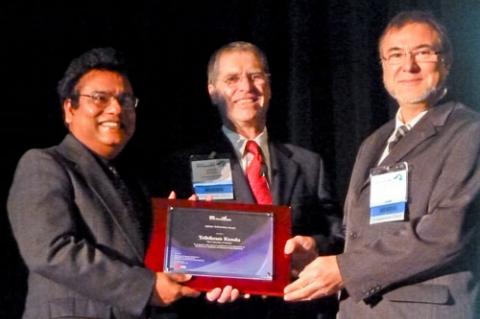 The conference features the latest research in areas such as smart sensors, biologically inspired robotic systems, electroactive polymers, civil infrastructures, and nondestructive evaluation, or NDE. This research addresses challenges in a broad range of fields from healthcare to homeland security.

Kundu's NDE Life Time Achievement Award reflects the quality and quantity of his research work during a 30-year career, during which he has made significant and original contributions to research in nondestructive testing and structural health monitoring of civil and aerospace engineering structures using ultrasonic and electromagnetic techniques.

"I consider this award from the SPIE as one of the two most prestigious awards of my career," Kundu said. He said the other was the Humboldt Research Prize awarded by the Alexander von Humboldt Foundation of Germany.

Kundu described his award as "humbling" because he joins the ranks of the nation's best-known scientists. "Past winners include some famous scientists, such as Professor Jan Achenbach of Northwestern University, who is a member of both the National Academy of Science and National Academy of Engineering," Kundu said. "Receiving a note of congratulation from him for winning this award was itself an honor."

Kundu graduated in 1979 with a bachelor's degree in mechanical engineering from the Indian Institute of Technology, Kharagpur, where he ranked first in his class and was awarded that year's President of India Gold Medal for excellence in academic performance.

After graduating he received a University of California Regents' Fellowship and joined UCLA, where he received his master's in 1980 and his doctorate in 1983. He received the UCLA Engineering Alumni Award in 1981 for his outstanding performance at the MS level, and the Hortense Fishbaugh Memorial Scholarship for his academic performance at the PhD level.

Kundu received Humboldt fellowships in 1989 and 1996, and the Humboldt Research Prize in 2003. In 2008 he was named Structural Health Monitoring journal's person of the year.