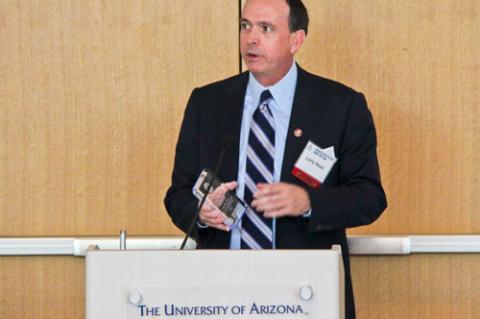 Larry Head, associate professor and head of the UA systems and industrial engineering department, accepts his award at the 2012 UA Innovation Day.

Head's research in traffic and transportation systems engineering is currently focused on priority-based traffic signals that can reduce fatalities among fire and rescue first responders.

Nearly 13 percent of the firefighters and police officers who die in the line of duty are killed in vehicle-related incidents, and fire trucks are involved in ten times as many collisions as other heavy trucks.

Head is working with the Maricopa County Department of Transportation in an attempt to reduce these deaths by creating a system that will make intersections safer for emergency responders and the general public.

"I'm honored to be recognized as a Leading Edge Researcher," Head said. "Usually transportation is not considered to be a cutting edge area for research, but our work should be able to help save lives of our first responders and make traffic systems safer and more efficient."

A prototype has been installed at six intersections in Anthem, Ariz., and a demonstration and press event are scheduled for April 2012. Head says the system being installed in Maricopa County could be one of the first steps in deploying a smart-vehicle system throughout the country. "I am also grateful for our partners at Maricopa County, ADOT, and City of Tucson," Head said. "Without their support we would not be able to pursue this area of research."

After the leading edge researchers were announced, the Technology Innovation Awards Luncheon honored an outstanding faculty member and student for their achievements in translating original ideas from the laboratory to the marketplace.

A special video, "Thinking the Impossible," premiered during the luncheon and highlighted how the UA has been a global leader in scientific and technological innovation for more than a hundred years.

Following the luncheon, the Innovation Showcase allowed participants to meet with UA departments, start-up companies from the Arizona Center for Innovation, and to get a preview of the business plans of students from the McGuire Center for Entrepreneurship.

Innovation Day at the UA is an official Arizona Centennial Event and a signature event of the Arizona SciTech Festival.

Other leading edge researchers named at Innovation Day were: