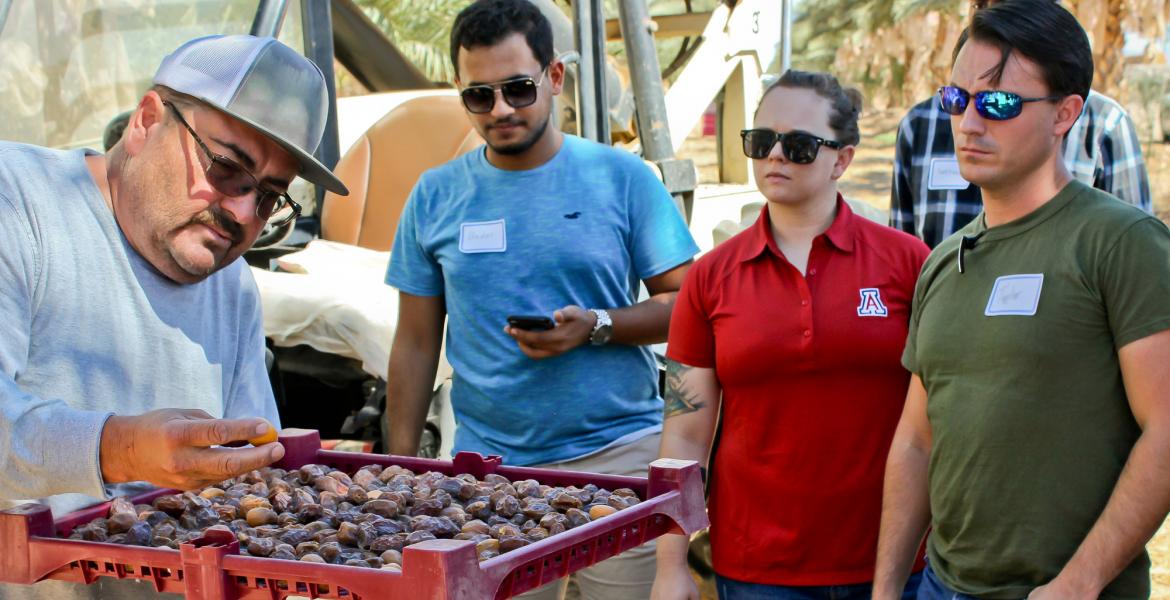 It’s a Bird! It’s a Plane! It’s a Date-Pollinating Drone!

By
Emily Dieckman
Time to read
3 minutes
Print
a- a+
Read so far
Engineering and business students design time- and money-saving agricultural technology and form a startup to bring the invention to market.

In the Persian Gulf region, farmers pollinate date palms by climbing to their tops and shaking a pollen wand -- being careful to avoid the trees’ thorns, which grow up to 6 inches. In places like Yuma, Arizona, methods are less dangerous but more inefficient: Farmers distribute pollen, which costs about $1,000 per liter, with a device similar to a leaf blower.

The project that took the top prize at Engineering Design Day 2017 was a drone designed to pollinate date palms while reducing pollen costs and increasing safety for workers. This year, the College of Engineering teamed up with the Eller College of Management’s McGuire Center for Entrepreneurship and the Yuma Center of Excellence for Desert Agriculture for the Go To Market Initiative. In addition to scaling up the technology and making the drone autonomous, participating students will develop a business plan for a startup that will bring the technology to market.

“Having worked in the date palm industry for 14 years, this has the potential to be revolutionary from a business standpoint,” said Dave Mansheim of Bard Date Co., who worked with the 2017 team and is guiding 2018 students.

This year, instead of an Engineering Design Program student team working on the drone pollinator for their capstone project, there will be three teams, which means three times the brainpower and three times the budget. Team 18054 is focused on the drone’s dispenser technology, Team 18055 is acting as “ground control” to map out routes for the device, and Team 18056 is working on communication security and making sure all of the drones in a fleet are working in harmony. Two graduate students from Eller -- one of whom has a background in the pollination industry, and another who grew up in a rural farming community -- are leading the business plan development.

“Everyone decided that if we were going to do this, we should go big or go home,” said David Dillon, program manager for the McGuire Center for Entrepreneurship.

Danielle Hoare, a biosystems engineering major heading team 18054, said one of the major improvements they’re making on the design is including a simple pollen-release switch to conserve pollen -- in the original design, the drone continuously dispensed pollen as it flew, so it had to move quickly. The computer systems designed by team 18055 will identify when the drone is over a date palm and should be dispensing pollen.

“As a human, to do that task, you’d use info you’re getting from your eyes and your other senses,” said Kyle Norland, a systems engineering major on team 18055. “We’re doing it with GPS, computer vision and depth sensing.”

Coordinating communication between 15 engineers and two Eller students has been a challenge. But the students have had the chance to learn about areas ranging from algorithm development to control systems creation to the ins and outs of the date palm industry. The opportunity to expand both the project and their own skill sets was a draw for many of the students.

“The project had a lot of work to be done, which meant a lot of room for creativity and a lot of areas to learn in,” said Brandon Bass, an electrical and computer engineering major leading team 18056.

The intellectual property rights for the 2017 project’s technology currently belong to Tech Launch Arizona, the office of the UA that commercializes inventions stemming from university research. But Tech Launch Arizona has agreed to negotiate with students who are interested in staying involved with the project after graduation: If they launch the startup and meet a series of benchmarks, such as developing a business plan and finding an investor, students can negotiate a percentage of the business’s equity.

“After graduation, I’ll probably stay involved, at least as a consultant,” Norland said. “There’s such a huge market for it, and it hasn’t been done widely before, so there’s a huge opportunity to, without much exaggeration, have either our version or a different version of this product change the date industry pretty significantly.”

It’s not just the opportunity for financial profit that makes this project more important to the teams than just any school project: It’s getting a firsthand look into current farming practices and gaining an understanding of how the product can improve people’s lives and livelihoods.

“This isn’t just research and then, in May, we’ll just drop the project off and never see it again,” Hoare said. “It just feels important that we’re working toward something that will have an actual impact on the market. That’s what real-world engineering is.”