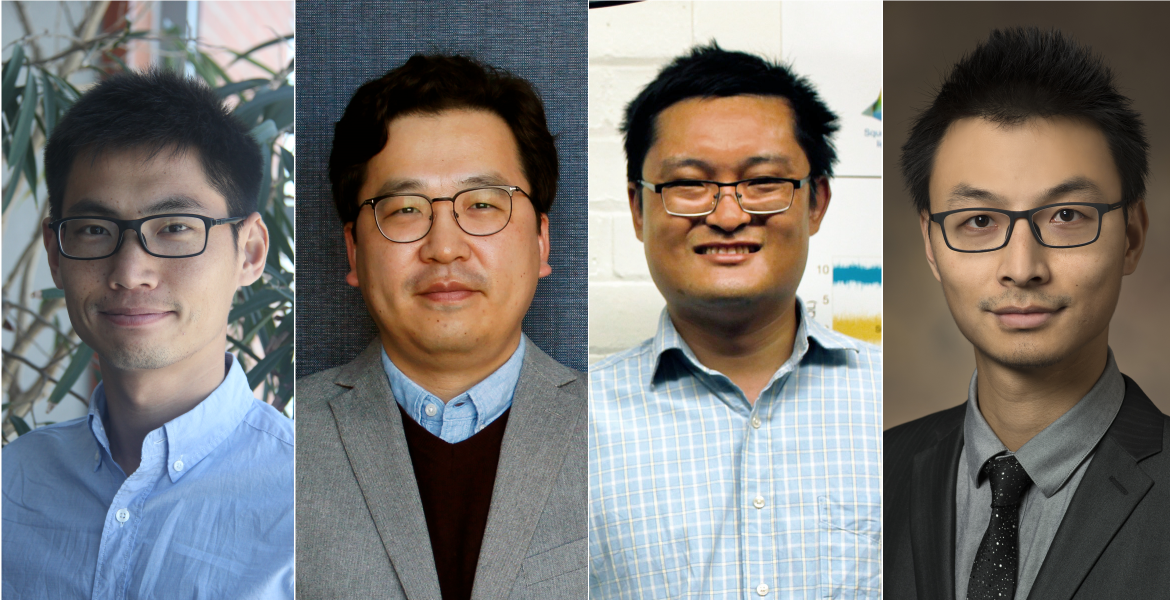 By
Emily Dieckman
Time to read
3 minutes
Print
a- a+
Read so far
Dean Hahn says he is excited about the college’s showing and what comes next for the early-career faculty members.

Four faculty members in the University of Arizona College of Engineering have received CAREER Awards from the National Science Foundation. Their work ranges from improving drug delivery for disease and managing renewable energy to advancing quantum technology. The CAREER Award is the foundation’s most prestigious recognition of early-career faculty with potential to serve as academic role models in research and education.

“We are always proud of our CAREER Award winners, and having four in the same cycle is a tremendous success for the college,” said David W. Hahn, the Craig M. Berge Dean of the College of Engineering. “These researchers are generating real-world impact by using engineering to tackle some of society's biggest problems. I look forward to seeing what they do next.”

The limited predictability of wind and solar energy makes it difficult to balance large-scale supply and demand. Cheng is setting out to improve the long-term generation and real-time dispatch abilities of these uncertain systems by proactively controlling the risk of shortage. In combination, these features enable renewable energy plants to plan ahead and pivot as needed. Further, Cheng proposes a unique approach to solve the risk-averse decision making problems within practical time limitation. The key idea is to combine a statistical method called sampling, and decomposition algorithms, which break problems into many pieces that can be solved individually then combined to reach a solution.

“Renewable energy has a future, and Arizona has so much sunshine, I think we need to try to make full use of it,” he said. “I want to improve the state of the art.”

Filtering out foreign materials is one way the human body protects itself. However, these built-in protections, including the kidneys and spleen, also remove foreign materials meant to do good. This means physicians often administer bigger doses of lifesaving or life-changing drugs, such as chemotherapy and multiple sclerosis treatments, to ensure enough gets through to treat disease. Kim is developing a protein-based drug delivery vehicle that imitates the properties of red blood cells, in essence masquerading as an insider to move through the filters undetected.

“A red blood cell is about 7 micrometers in diameter, and they go through microcapillaries, which are a lot smaller than that,” said Kim, also a member of the BIO5 Institute. “When it needs to move through a small space, its structure can be extended by protein unfolding, but once the stresses are removed, the original structure returns. A red blood cell can do this a thousand times and continue to show the same mechanical behavior.”

Quantum physics follows laws unlike those in classical physics, and the unique nature of quantum resources could make computing, sensing and communications systems almost unimaginably more powerful. For example, in 2019, Google’s quantum computer completed in 200 seconds a calculation that would have taken the world’s most powerful classical supercomputer 10,000 years.

However, quantum states are fragile and difficult to maintain, especially in the presence of noise or interference. While quantum computers of the distant future are expected to hold hundreds, even thousands, of qubits, the most sophisticated quantum computers now have only about 100.

Zhang and Zhuang, members of the University of Arizona Center for Quantum Networks, are finding ways to harness the power of quantum today, in what researchers have dubbed the Noisy Intermediate Scale Quantum, or NISQ era.

In their work, both researchers are using photons – which are workable at room temperature, more stably maintain quantum states, and are compatible with existing communication architecture – rather than the more commonly used electrons or trapped ions.

“From the measurement outcome, you more or less know how far you actually have deviated from the correct direction,” he said. “Then you use the classical computer to process and learn that piece of information, and set the configuration of the next processing unit, so you can sort of steer the direction of the algorithm toward the correct solution.”

Zhuang is bridging the theoretical gap between what quantum resources can achieve in the NISQ era and what scientists expect them to do in the future. His project focuses primarily on advancing quantum theory, while also identifying processes that can benefit from quantum entanglement even in the presence of noise.

The work includes protocols for three primary applications: a radar system to identify the angle and velocity of an object, not just its location; a higher-rate communication network; and a distributed sensor network with error correction capabilities to compensate for mistakes caused by quantum fragility.

“Overall, my proposal tries to understand how entanglement, which is a nonclassical resource brought by quantum physics, can help all of these processes and protocols in the presence of noise, because we know noise is everywhere,” he said.