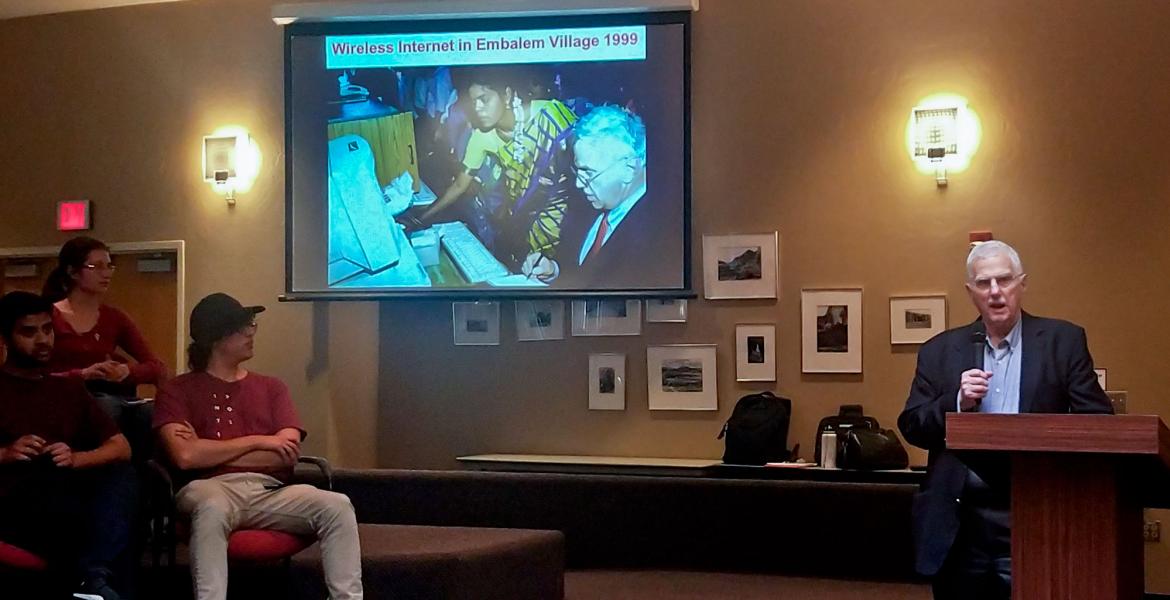 Bruce Alberts, right, talks about the many roles scientists might play in different sectors of society, in a talk at the UA student union on March 21, 2018.

In his March 21 talk in the Student Union, Bruce Alberts, the chancellor’s leadership chair in biochemistry and biophysics for science and education at the University of California, San Francisco, expressed a sentiment familiar to many scientists.

“I wish the world worked more like science worked,” he said. “One of the great features of science is that we don’t believe we know anything.”

Alberts has served two six-year terms as president of the National Academy of Sciences, was awarded the National Medal of Science by President Barack Obama in 2014 and received the 2016 Lasker-Koshland Special Achievement Award in Medical Science. He was the editor-in-chief of Science Magazine from 2008 to 2013 and co-chair of the InterAcademy Council from 2000 to 2009.

The event was part of a series of science diplomacy talks sponsored by Science, Health, and Engineering Policy and Diplomacy initiative led by Hassan Vafai and Kevin Lansey in the Department of Civil Engineering and Engineering Mechanics.

Alberts began by speaking about how much he loves science, especially studying the cell. As one of the authors of the preeminent textbook “Molecular Biology of the Cell,” he also emphasized how much there still is left to learn.

“Of course, textbooks write about what you know, so students get the impression you know about 90 percent of what there is to know,” he said. “Those of us who write textbooks feel we know about 10 percent.”

A Shift in Sector

In 1993, after 30 years of running research labs, Alberts got a call asking if he’d like to be the president of the National Academy of Sciences. He was reluctant to leave his lab at first, but eventually accepted because he was eager for the chance to help reform science education. He made the leap, becoming part of a group that produces more than 200 reports each year, 85 percent of which are requested by the U.S. government, but none of which are funded by the government -- ensuring that research efforts remain nonpartisan.

In Arizona, and in many other colleges around the United States, a revolution is happening where we’re trying to change the nature of scientific education.”

One such report was the Arsenic in Drinking Water study in 1999, which found that even low levels of arsenic in drinking water were more dangerous than scientists had initially thought. Not only did it lead to the United States administration adjusting its water safety guidelines, but the study is used by governments all over the world working on policies to make drinking water safer.

If crucial research like this is to continue, Alberts said, the world, including the United States, must shift its attitude toward science. To create a scientific environment that encourages critical thinking and risk taking in research, he advocates for a reshaping of science education. Only through education that is hands on, collaborative and starts with young children can we have critically thinking kids who will grow into critically thinking adults, he said.

“What we do at the university sets the standard and defines what science education is, and if it’s memorizing every factoid in biology, that’s what they’ll do in middle school. That’s what they’ll do in kindergarten,” he said. “In Arizona, and in many other colleges around the United States, a revolution is happening where we’re trying to change the nature of scientific education.”

Reiterating the importance of scientists in the adult world is important too, he said, and can be achieved by placing scientists in different sectors, creating career paths for PhDs into areas such as law, government, media and pre-college education.

He cited the California Council on Science and Technology’s Science and Technology Policy Fellows program, which places PhD-level scientists into the state legislature for one year to work with policymakers. When the program debuted in 2010, some legislators were reluctant to even take in the scientists. Today, about half of the program’s graduates have been permanently hired in policy roles -- 19 in the state legislature.

“Both the legislature’s appreciation of scientists and its use of science for decision-making have dramatically improved,” Alberts said.

His mission extends beyond U.S. borders. He was one of the first three Science Envoys to Indonesia from 2009 to 2012, and has continued working with the country since, traveling to Indonesia for the 11th time in 2017.

In 2015, he helped form the Indonesian Young Academy of Sciences. Members between the ages of 35 and 40 serve five-year terms and, unlike in traditional science academies, membership requires a commitment to public service. The Young Academy has allowed scientists who earned their degrees outside of Indonesia to produce a new vision for the country’s scientific future -- in ways that range from reforming the education system to using social media to foster interest in research. By developing tomorrow’s leaders through the Young Academy, Alberts hopes scientists can expand their reach.

“Scientists are a great glue for building understanding between people,” he said, showing the room an illustrative photo of 15 National Academy presidents from all over the world getting breakfast together at a Swiss McDonalds. “Science has a common culture, and it really is amazing how, despite very different religions, political affiliations, whatever, scientists can communicate across a common set of assumptions and values.”

The third talk in Science, Health and Engineering Policy and Diplomacy initiative speaker series is by Peter Hotez, dean of the National School of Tropical Medicine at Baylor College of Medicine and advocate for global health and vaccinology, at noon on Friday, April 27, in room 103 of the Thomas W. Keating Bioresearch Building.