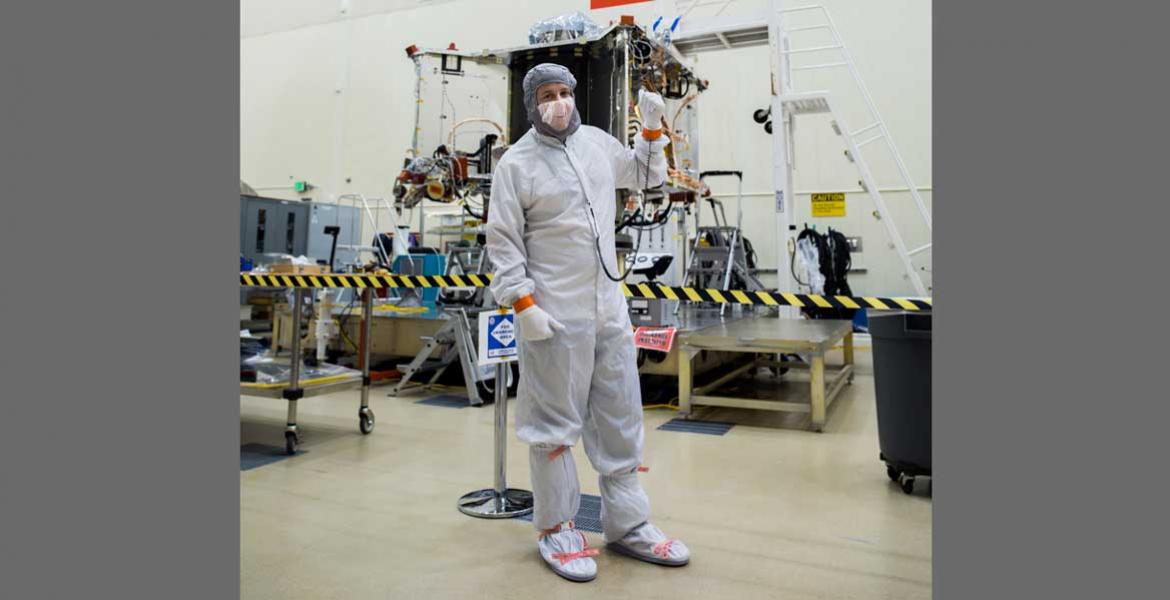 Bradley Williams, a University of Arizona alumnus and employee, and recent recipient of a 2019 Flinn-Brown Fellowship, poses with the OSIRIS-REx spacecraft in the Lockheed Martin cleanroom. (Photo courtesy of Bradley Williams)

By
Emily Dieckman
Time to read
3 minutes
Print
a- a+
Read so far
Engineering alumnus and UA employee started his deep space journey at 10, viewing command of the Mars Polar Lander’s failed descent. Now he’s extending his problem-solving skills behind the scenes.

Bradley Williams sat cross-legged in his fifth grade classroom watching television coverage of NASA’s command of the 1999 Mars Polar Lander descent. Suddenly the lander lost communication with Earth, and his teacher turned off the television. But she’d turned on the 10-year-old’s passion for deep space exploration.

“I watched that thing crash, and I got inspired to do space stuff,” Williams said. “All these years later, I now work with people who had a vested interest in that mission.”

As if it were destiny, Peter Smith, the principal investigator of the Phoenix Mars Lander mission -- which rose from the ashes of the Mars Polar Lander -- eventually gave Williams his start in space research when Williams took one of Smith’s classes at the University of Arizona. Williams even went on to name Smith’s research lab.

Williams earned his UA bachelor’s degree in mechanical engineering with minors in math and planetary science in 2013 and an MS in systems engineering in 2018. He now works as a project manager at the UA’s Steward Observatory, executing several of the funded and proposed NASA missions at both the observatory and Lunar and Planetary Laboratory. The Arizona Center for Civic Leadership at the Flinn Foundation named him one of 30 members of the 2019 class of the Flinn-Brown Civic Leadership Academy.

“The aerospace industry has a large presence in Arizona, so I’d love for it to be a force for progress and change in the state,” Williams said. “The UA is at the epicenter of space in Arizona and in a good place to push us into the sky.”

Williams came to the UA because of its ties to space exploration and during his second year as a Wildcat began working on the university’s OSIRIS-REx mission to return a sample from the near-Earth asteroid Bennu. After graduation he joined the project full time. Once the spacecraft launched, Williams’ work on the mission was done, but his team wanted him to stick around.

“A number of people went to bat for Bradley to make sure he stayed at the UA,” said Michael Ward, a systems engineer at Steward Observatory. “He’s very highly motivated and has such an impressive work ethic.”

Now Williams is the deputy payload manager for GUSSTO, an astrophysics mission studying terahertz spectral bands in the universe to understand the interstellar medium and where stars are likely to form.

“The thing about the space community -- especially at the UA, but even nationally and internationally -- is it’s so small,” he said. “There’s a lot of opportunity to blaze your own trail. We’re always working on that next great project.”

Bringing the Aerospace Industry Down to Earth

Working in the aerospace industry has given Williams a chance to get acquainted with its challenges, particularly in Arizona. Finding an educated workforce is one big hurdle for the industry, and providing kids with the right tools to succeed in today’s high-tech, fast-moving world is the place to start, he said.

“We already know that if you bring your education system up, you naturally have a better economy. If we want to improve education, why can’t we leverage the aerospace industry to do that?”

If we want to improve education, why can't we leverage the aerospace industry to do that?"

The Flinn-Brown program educates fellows about how the state operates and how to move ideas through the legislature to make substantial change. Williams said the opportunity to sit in a room with policymakers, mayors and city council members has been eye-opening. He credits his UA education with fostering the skills he is putting to newfound use behind the scenes.

“My UA education taught me to problem solve,” he said. “It provided me with a skill set and the ability to face problems that I’m not necessarily comfortable with, and to know you don’t have to be an expert in a room. I have a skill set to be able to solve a problem, even if I’m not an expert.”

His colleagues think he is the right man for the job.

“It takes a special person to communicate issues, make personal connections and speak intelligently about technical topics, while also making them relatable to people who might not have technical backgrounds,” said Matt Angiulo, a section head at Raytheon’s Guidance, Navigation and Control Center and deputy director of public policy for Region VI of the American Institute of Aeronautics and Astronautics. “These are things Brad is particularly good at. He’s passionate about what he does, and he likes to share that.”