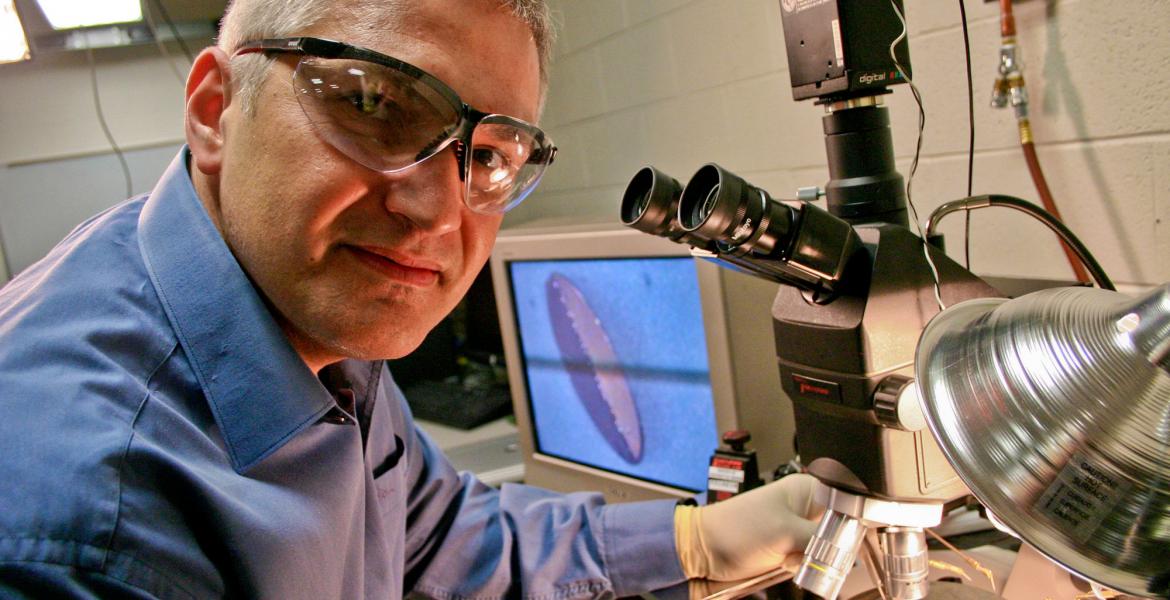 Eniko Enikov helped set up the student exchange as part of his 2007 Fulbright Fellowship from the U.S. Department of State.
Home / Stories / Engineering Students to Study Micro- and Nanosystems in Eastern Europe

Engineering Students to Study Micro- and Nanosystems in Eastern Europe

By
Pete Brown
Time to read
2 minutes
Print
a- a+
Read so far
UA Engineering students are headed to Europe to study micro- and nanosystems, thanks to joint US-European funding.

The UA has received a grant for 12 mechanical engineering students to study micro- and nanotechnology at technical universities in Hungary and Slovakia.

During each of the next four years, three UA and three New Mexico State University students will each receive a $5,000 stipend to cover their living costs in Europe for one semester. The $180,000 grant was awarded jointly by the U.S. Department of Education and the European Commission’s Atlantis program.

Similarly, during the next four years, 12 students each from BME and STUBA will each receive €5,000 to cover their U.S. living costs for a semester. The first students are expected to join the program in the spring 2009 semester.

In the UA College of Engineering, the prime mover behind the exchange program is BME alumnus Eniko Enikov, associate professor in the Department of Aerospace and Mechanical Engineering, and director of the Advanced Micro and Nanosystems Laboratory. Enikov earned his master’s degree in mechanical engineering from BME in 1993.

“There are similarities in our research,” said Enikov, comparing the U.S. and European agendas. “But historically, research in Eastern Europe is more theoretical, so we are trying to forge a complementary research program.” The Department of Aerospace and Mechanical Engineering has a strong and growing program in the area of micro- and nanotechnologies supported by four faculty members.

The AME department at NMSU has 23 faculty members and focuses its research on the theoretical aspects of micro- and nanosystems. While abroad, students are expected to take at least one course at the foreign institution and participate in independent research. Students will receive a certificate in Advanced International Studies in Mechanics of Micro- and Nanosystems.

“There is a growing trend in academic internationalization,” said Enikov. “Students need to be able to compete globally. Industry already does.” Evidence is mounting that such programs give students an advantage: “Students will be more marketable if they have foreign experience,” said Enikov.

Vince Glowacka agrees with Enikov’s views about the internationalization of education -- sort of. Glowacka is currently studying for a master’s in mechanical engineering at UA, and spent the fall 2007 semester at BME as part of a similar exchange program.

“The trip was useful academically,” he said. “But I think it was more useful culturally. It gave me a much broader perspective of my work.”

BME was established in 1782 and is considered the world’s oldest university of technology. It has approximately 1,100 faculty members and about one-third of its 2,400 students are foreign students from 50 countries. BME issues about 70 percent of Hungary’s engineering degrees.

STUBA’s Institute of Applied Mechanics and Mechatronics has a well-established international program in mechantronics at undergraduate and graduate levels, and a graduate applied mechanics program.

One of the research projects that these exchange students will work on is a microrobotic drug-delivery system. Students will fabricate a 2-mm microrobot with a ferromagnetic skeleton shaped like a football. The microrobot can be introduced into the human vascular system via a capillary manifold, which coats the device with a drug and targets a specific part of the body.

Editor's note: Why does BME avoid the more obvious acronym of BUTE? The university’s full name in Hungarian is Budapesti Műszaki és Gazdaságtudományi Egyetem. In Hungarian, it is acronymically acceptable to use BME. It is worth noting that the Hungarian word for “stupid” is buta.